If the trucks stop, so will Alice …

A close encounter with the past 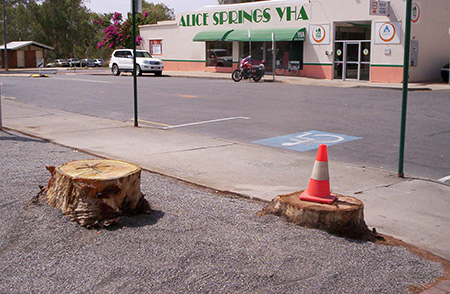 UPDATE, December 8, 2011: Plantings are underway in amongst the blue metal. See Mike Gillam's comment posted on the full story page for the latest.

Yeperenye Pty Ltd appears to be putting itself in contention for the Alice Springs landscape design award, with this effort at its carpark adjacent to the ANZ bank on Parsons Street.

After chopping down mature trees, including a number of river gums, and clearing all other vegetation from the area in late October, the company promised that a "beautification program" would follow shortly.  It was to include "smaller, safer trees and shrubs". Perhaps they're coming, though not many people would start a garden by spreading thick piles of blue metal. KIERAN FINNANE comments.

The Alice Springs News Online has invited Yeperenye Pty Ltd to respond. To date they have not done so.

River management: the struggle to get long-term action (re-published with Maxine Cook's comment) 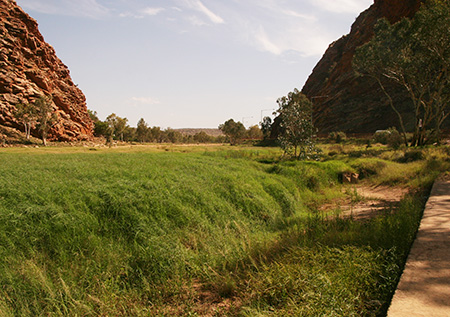 The popular misconception about sand being taken out of the Todd River is that this is done as a flood mitigation measure, deepening the channel to allow a greater volume of water to flow within the banks. In truth, it would take major works  to achieve this, including the removal of causeways and the re-location or re-laying of services that are under the river.

The works that are undertaken are better described as "channel improvement" to prevent channel migration and bank scouring.

The Town Council's Director of Technical Services, Greg Buxton explains that this is done "to ensure the river doesn't change course and endanger the properties close to the existing river banks."

However, works at Heavitree Gap are seen as a priority and would contribute to reducing the threat of flooding. "Silt, fines and sand" deposited at the gap by flows have "grassed up" with couch and kikuya, matted into a solid mound (pictured) that now stands well above the Bloomfield drainage line.  These conditions could lead to the river breaking its banks in a Q20, let alone a Q100.

Extensive works removing sand and weeds were done to address this very same problem at the start of the decade, so why hasn't there been regular maintenance? KIERAN FINNANE reports. 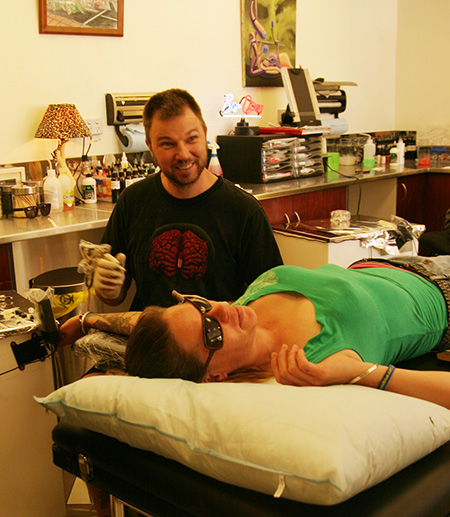 There's a movement around Australia to arrest urban decline. Alice could follow the example of some other fight backs.

They're bucking a trend: as businesses close down or leave the town centre for another location, they've moved into Gregory Terrace, just around the corner from Todd Mall's busy southern end. They've done a clever and stylish revamp of the former fish 'n' chips shop; they're catering to  younger consumers – 18 to 35 years – and doing what it takes to appeal to them: offering an experience, not just a product; a cool aesthetic, and working flexible hours.

Dwayne Chapple and partner Peta Coburn bought the tattooing business, formerly at the Polana Centre on Smith Street, after Mr Chapple had been working in it for three years.  "We wanted to get away from the stigma of the old shop, the old tattoo cliches. We wanted to be part of the community, be where the action is," says Mr Chapple. 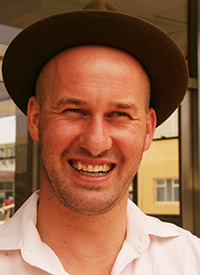 Stay True Tattooing is a good example of a business recognising the strength of the local younger market, says Matty Day. A former professional skateboarder turned community development activist, he recently joined the business innovation committee started by Alderman Murray Stewart in an attempt to get some creative focus on Alice's declining economic fortunes.

Mr Day is convinced that there is opportunity in the current situation. He is taking his cues from the Renew movement, which began in Newcastle in late 2008, driven by a prominent arts and media identity, Marcus Westbury. Melbourne-based, Mr Westbury had grown up in Newcastle. He found his home city in decline: in the two main streets 150 buildings were empty. The area was widely seen as violent and dangerous; there was a lot of vandalism, graffiti, and growing anger and distrust in the community. His answer was to establish Renew Newcastle. In just 18 months the situation had turned around.  The ideas started to catch on: there are now similar revitalisation schemes in Adelaide, Townsville, Geelong and Parramatta. Mr Day says Alice should be next. KIERAN FINNANE reports.

Pictured: Top – Tattoo artist Dwayne Chapple at work. His business has relocated from Smith Street to the town centre: "We wanted to be part of the community, be where the action is." • Above – Matty Day wants Alice to think about rebuilding in our own community instead of putting all our eggs in a hoped for, but maybe elusive tourism basket.

By ERWIN CHLANDA How about coffee next week? Sure. Where? Oh, about 35 km north of Alice Springs, by the side of the road. Jose Petrick is...
Read more

By ERWIN CHLANDA The producers of Lindy Chamberlain: The True Story, which went to air on the Ten TV network on Sunday and Monday, invited...
Read more
ABOUT US
FOLLOW US
©