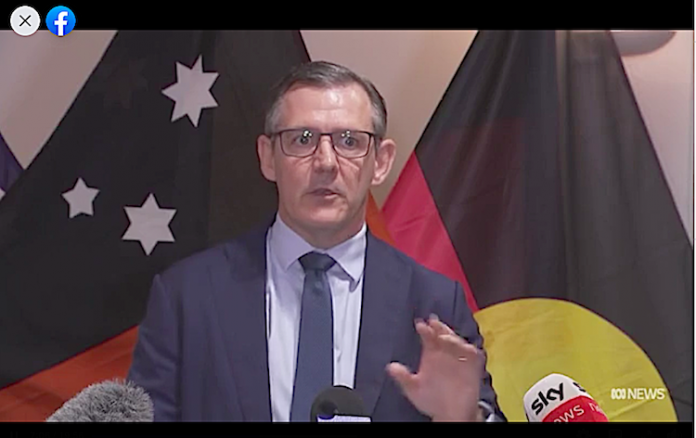 The words “Alice Springs” were not spoken by Chief Minister and Treasurer Michael Gunner today when he handed down the 2020-21 Budget, neither at a stage managed presentation in Darwin nor at a media conference there.

While forecasting a fiscal balance deficit of $2.45 billion he touted the Territory as “Australia’s come-back capital” where Darwin would benefit from resource and defence investments, already “looking good” with the “rental market squeezed for the first time in ages” and Darwin house prices “essentially going up – best return of any of the capital cities”.

People are signing “12 to 18 months leases” amid a “huge surge in confidence.

“Real estate values are gathering strength … the fastest growth in the country in October.”

In September the NT was the only place in the country where the retail numbers went up.

Speaking clearly about Darwin Mr Gunner said it’s a “desirable destination, a place to live and work” a reputation that has been “turbocharged” by the “freedoms we offer and the warmth of our people” – a picture a long way from the out-of-control street crime in Alice Springs.

A Darwin media conference, at which the Alice Springs News was not granted electronic participation, focussed on questions about how the government’s wage policies will play out with the unions, as they seek to improve the budget position by $424m over four years from 2021-22.

Mr Gunner said there is no room to move: “We can control wages or we can cut jobs” and he made it clear jobs were his priority.

The average cost for a public servant is about $100,000, he said, inviting the media to calculate how many would need to be sacked to reach the $424m target.

“There is no white knight coming over the horizon,” he said. It cannot be expected that funding from the national GST – the NT’s vital income source – would soar.

Most media questions sooner or later were answered by references to COVID-19 and the need to protect lives.

“We are coming out of survival mode. The numbers are not pretty,” Mr Gunner said.

The NT unemployment rate is tipped to stay lower than the national rate, he said.

The Territory’s deficit is not as bad as the Commonwealth’s: The latter’s $213 billion debt results in a debt to revenue ratio of 149%.

“We are actually coming in under that,” says Mr Gunner: The NT’s $2.4 billion deficit results in a 132% ratio.

US Marines in Darwin: Dollars flow.

What he didn’t say was that unlike the Commonwealth’s, the NT’s debt had ballooned before the Coronavirus hit, claiming “we [had] started to turn the corner” when it did.

Says a government media release: “As expected, the Territory Budget has been hit hard by the coronavirus crisis, especially in GST revenue – with a cumulative loss of $1.6 billion in GST and relativity top-up payments over four years, compared to 2019-20 projections.”

This year’s deficit “is projected to more than halve to $1.1 billion in the next two years”.

Speaking without notes and referring to extensive financial information Mr Gunner painted a rosy picture for a Darwin crowd in the Convention Centre.

This included a defence build-up and while noting that the cash for it would come mostly from Canberra he said the NT Government is putting money into the SunCable project – a line taking solar generated power to “the huge markets” of Singapore and Indonesia – as well as a “seperate sub sea link from the West Coast USA to South East Asia.

“We are connecting to this incredible technology,” he said.

“Modern weapons platforms cannot operate from here without huge data,” suggesting that the NT Government is getting into the armaments business.

Plus there would be storage for “us and our neighbours”.

Defence projects are either under way or scheduled to begin in the Top End.

Although off-shore gas and oil royalties go to Canberra Mr Gunner expects there will be benefits for Darwin from the Santos purchase of ConocoPhillips for a price that includes “many, many zeros” (reportedly $2.2 billion).

Onshore mining royalties are 15% below estimates but there are near record levels of exploration and production, going in a “good direction”.

Arafura, the proposed rare earth project near Aileron, like other mines, is ready to go but “needs final cash and final customers”.

Mr Gunner sees gas as an inevitable “transition fuel” on the way to develop hydrogen and solar electricity which, it is planned, will power the Middle Arm Industrial precinct.

Without gas “we cannot get to a fully renewables future and meet our renewables targets,” he said.

The NT will partner with the Commonwealth JobMaker theme topping it up with $100 a week for new employees aged 30 to 35 and $200 a week for employers over 35.

For homelands a deal is in the making between the NT and Federal governments as well as the land councils “through the Aboriginal Benefits Account” to kick in a recurrent $20m each to “cover shortfalls in services”.

Says Mr Gunner: “I hope they will come to the table.”

“Mining is the single biggest source of revenue to the Territory and requires major taxation and approvals process reform, and yet the Chief Minister is flagging a more than $122m million reduction in royalties.

“Police barely garnered a mention, despite the escalating crime and violence in Alice Springs.

“The Chief Minister likes to blame the COVID-19 crisis for the Budget damage, but by his own admission, our COVID response has cost $400m in stimulus, $63m in frontline services and this Budget allocates a further $120m to our response.

The Electrical Trades Union claims the Budget “kicks frontline workers in the guts and puts the COVID recovery at risk”.

ETU State Secretary Peter Ong says: “When you reduce real wages over such a long period of time for a significant chunk of the workforce you increase the severity of the downturn.”

He says members at TGen and Power Water Corp (PWC) “feel they are being punished for years of incompetent management, ballooning consultant costs and failed projects.

“They have seen millions of dollars wasted in perpetual failed projects which do nothing except fill the pockets of consultants, they’ve seen more executive contracts awarded while we struggle to get apprentices on and now the Government announces a four-year wage freeze without even consulting with them and their union.

“It is an act of arrogance and a betrayal of trust,” Mr Ong says in a media release.

“The Territory has been screaming for skilled workers and their families to make a life for themselves up in the top end. This will stop that in its tracks and worse, it will lead to a brain drain.”

The union will be seeking further direction from its members over the coming weeks, he says.

The ETU is scheduled to negotiate EBAs with both PWC and TGen over the next two years.

“Economic growth is forecast to be flat at best, jobs will disappear, and unemployment will rise,” he says in a media release today.

“It is also abundantly clear that the Territory Government is smashing the accelerator through the firewall to keep things moving, with a mammoth Budget deficit of $2.45 billion, numbers we have never seen before!”

There will be a massive fall in Government revenue due to the pandemic, even as the governments’ costs continue to rise in support of the community.

“The hard and difficult task of rebuilding is only just getting underway,” says Mr Malone.

“Rebuilding will require a partnership between business and Government.

“What we must do is get investment going, and fast!”

The Government has made a big investment in infrastructure, $1.75 billion for roads, housing, and facilities.

“Now the grind begins. Government must accelerate its other projects like the Shiplift. We need a Co-ordinator General to accelerate private projects. And we need an Infrastructure Commissioner to pack age the next wave of public projects,” says Mr Malone.

“Time is the one luxury that we don’t have!”

South Australia’s population is 6.7 times larger than that of the Territory, but SA spends only little more than twice of what Mr Gunner will be splurging – $22.2 billion versus the NT’s $9.3 billion.

That’s just for this year, not counting the debt accumulated earlier, nor the hundreds of millions the Feds are pumping direct into Aboriginal programs in the NT, apparently substantially more per capita than in South Australia.