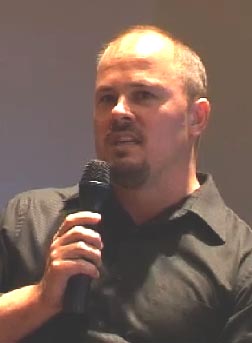 The Desert Knowledge Q&A-style forum yesterday unearthed some gems.
One was the profoundly convincing and moving support for alcohol restrictions by Brad Bellette (pictured at right), whose father was a “very violent alcoholic”.
For someone who owns an advertising agency in a town dominated by the alcohol industry and culture, this was a brave statement.
And the other was Kenya-born Year 10 student Kemy Ogendi (pictured below) who with astonishing clarity and precision defined the problems between young and old in Alice Springs.
In a place where endless meetings and consultations take the place of real action, she said we need to know why teenagers are having “the nerve to go to someone older and beat them up or break into their house.”
Nairobi is infinitely more dangerous than Alice Springs: Some people would have walked here tonight, she said. They would think twice about doing that in Kenya’s capital.
The St Philip’s student said young people in The Alice are told: “Here is a role model. Follow them. They are leaving in a month.”
Generations need to develop mutual respect, she said, and have a meaningful dialogue, something that’s not happening now, despite the lip service.
Mr Bellette was doing a double act with Dave Nixon, the technical producer of the show which was streamed live.
Mr Nixon was putting tweets on the screen, as the audience, time and again, raised issues of crime and violence.
With respect to these problems, alcohol is the elephant in the room, Mr Bellette remarked.
Mr Nixon, between pans with his camera, tweeted: “Alcohol issue not hard to solve – stop takeaway sales.”
And later: “Ban takeaway. Allow for home delivery with proof of occupation. Can easily police town camp drinking then.”
(This is not unlike a proposal raised for discussion in May, 2006, and reported in the Alice Springs News, proposing takeaway sales for locals only on Tuesdays, the last day in the weekly welfare cycle. Liquor sales to visitor would be allowed 24/7 so long as they can prove that their usual domiciles is outside a 1500 km radius.)
Moderator Adrian Renzi, from Radio 8HA’s Territory Today, said: “Holy moley Dave. That’s a big can of worms you’re opening up there. Do we want to go there? You want to tackle the alcohol takeaway issue. You be my guest. You go your hardest, fellow.”
Mr Bellette: I actually agree.
Mr Renzi: Yeh. OK. There’s a brawl.
Mr Bellette: “The only time I remember having a good time was when [my father] wasn’t around.”
The other day he took his four-year-old son to the kindergarten. The teacher there asked Mr Bellette to do a drawing from the time when he was four: “I couldn’t do it. I simply couldn’t do it. I couldn’t remember and it wasn’t that good.”
Grog and crime questions were fielded, in a pleasant manner, by Senior Sergeant Peter Dash, but in the end he couldn’t tell the meeting more than his boss had done in September, at yet another public meeting.
Assistant Commissioner for Regional Operations, Mark Payne said then that during the crisis months of December and January, if required, the “big guns” would be brought in from Darwin. 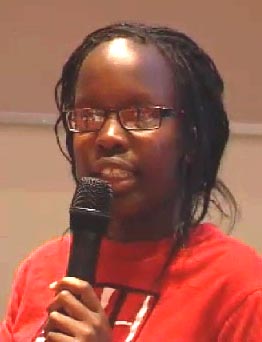 Sgt Dash let slip yesterday that this would be the case for just one week.
He said for some truant kids “being on the streets sometimes is a lot safer for them than being in their own homes”.
It’s a measure of how tolerant of the intolerable this town has become for a sentence like that being spoken without all hell breaking loose.
“We do have those conversations with these children,” said Sgt Dash, and the matters are being referred to the authorities.
Are the parents being prosecuted for failing to provide the necessities of life for their children?
No mention of that.
Panel member Catherine Liddle, co-chair of the Alice Springs Community Action Plan Committee, fielded lots of questions, in a caring, bright manner, yet entrapped in bureaucratic jargon and processes – meetings, outcomes, consultations, programs.
Any reference to self-help was conspicuously absent.
Much of what was raised at the meeting had been said many times before.
Except for the proposition by Mr Bellette and Mr Nixon, no concrete suggestions for solutions were made.
No-one with the power and skill to implement solutions was in the room.
The good news is, live streaming is a great way to attend a public meeting.
You don’t have to leave home to be there.
You can have your say on twitter.
And if it gets boring and long-winded, you can sneak out without being seen doing it.