If the trucks stop, so will Alice …

… but there is an alternative.

Last week on Tuesday evening Woolworths’ fresh produce aisles bore a striking resemblance to some of my imaginings of what would happen in a remote town like Alice Springs if the food transport system failed. The whole section was eerily empty aside from a few disorientated staff wandering about attempting to look busy.
While the Fresh Food People’s shelves were bare, my fridge shelves were brimming with heads of lettuce, shallots, basil, rocket and other fruit and veg. My housemate and I get a $30 fresh box of produce once a fortnight through Food for Alice. The box is stocked with locally grown fresh fruit and veg sourced from the Steiner school garden, back yard vegie patches and the Alice Springs Market Garden.
Started in September, the Food for Alice crew plan to have the box ultimately filled by only locally sourced produce. For the moment though, shortfalls are made up with produce from Adelaide. Coordinator Cassandra Douglas Hill says that they use an existing local distribution line to truck these goods in.
Cassandra is also the manager for the Jimmy Little ‘Thumbs Up’ program, a nutrition education program for kids. She believes that local food self-sufficiency is possible but that there need to be incentives, as at present the produce box system isn’t generating a profit and is volunteer run. As more people become involved, a greater buying power will follow with demand reducing costs. There’s a wealth of knowledge and expertise in Alice Springs that could increase our food self-sufficiency. “The challenge lies more in the coordination of these skills,” says Cassandra.
The store manager at Woolworths Alice Springs could not comment on last week’s empty shelves (a strange air of mystery hung over these conversations) and I was transferred along the lines to Sydney where I spoke with Woolworths’ media relations manager, Benedict Brooks. He explained that the Monday trucks’ cooling systems had been faulty and when the trucks arrived the produce was frozen and couldn’t be sold: “Being the Fresh Food People, the goods didn’t meet standard.” It wasn’t till Wednesday that the next delivery came in and by Thursday the shelves were back to normal. A plausible explanation but the problem as I see it lies not with the trucks’ faulty temperature control but the fact that we so utterly depend on them. As they say: if Australia’s trucks stop, so does Australia.
Jimmy Cocking from the Arid Lands Environment Centre (ALEC) told me that a food security plan for Alice is “definitely on the radar”: “ALEC recognizes Alice’s vulnerability in terms of food security, which is why it is involved in the Community Garden, gardens in schools and the Food for Alice group.”
As a next step there are plans to hold a regional food conference as part of next year’s Ecofair. A food security strategy would evolve from those who come to the table and the vision is one of an interrelated food web for Central Australia. 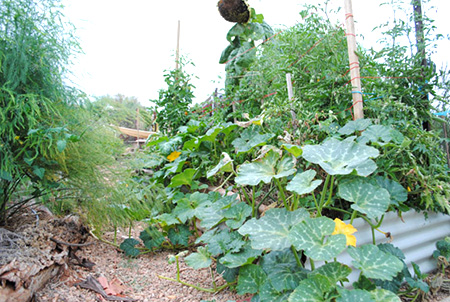 With food gardens popping up all over town, from schools to the Youth Hub to youth centres, I spoke to Kim Hopper, one of the project officers for the Community Garden, about the role envisaged for it.
“It’s about bringing a diversity of people together around food and gardening to help people reconnect with food and where it comes from. This in turn can help people see a logical path towards choosing to eat within local seasonality or pay much higher prices for goods that are not.” The garden is being installed through a series of documented workshops, building educational resources as they go. Through skill sharing and these best practice models for arid zone gardening, people become inspired and awareness is raised around what is and can be made available.
Despite the enthusiasm for the concept, according to Ben Wall, a past committee member for the Community Garden, “nothing that serious is being done towards food security”. He sees the expanses between Alice and the nearest food production bowls as “millions and millions of acres of food”. But the desire to understand where, how and when to harvest local foods isn’t great and would probably remain so till the advent of an apocalyptic food emergency.
Proper partnerships and cooperation with Aboriginal communities around land use and seed prices could become excellent enterprises where everyone benefits. Alice is perhaps ripe for working in this way and becoming a model for the rest of this semi-arid continent and increasingly arid world.
Ben would like to see land made affordable for small-scale communal farming as most large scale farming produce goes to interstate markets. Similarly with water. Finding an end-user for the treated water from the sewerage ponds has targeted large-scale crop growers and with no one putting their hand up for it, the water is presently being pumped to an aquifer at AZRI.
With more small scale and cooperative approaches to water and land usage Ben imagines the land around the airport as ideal to be divvied up with long-term leases between 10 crop-growers. He reckons he knows 10 people that would be up for that right now!
Just as important though as producing more local food is to reduce the amount that is wasted. With one third of the world’s food going to waste there is massive room for change. I guess perceptions around what is waste and what are resources need to be challenged and explored. Talking to Alice News editor Erwin Chlanda, I learnt that close to 3000 million liters of water are lost in evaporation from the sewerage ponds every year. Erwin painted a great alternative picture where a perception of what is waste and what is resource would be reversed: a sewerage recycling plant that out one chute produces clean water and out the other packets of fertilizer. The sale of the land now used for the evaporation ponds could more than cover the cost of such a plant. (See the exploration of this concept, ‘Sewage “farm” – future housing?’ in the Alice News archive.)
The conversations I had with a few people this week barely scratch at the surface of a wealth of great ideas and local knowledge around food and alternative systems. There does however seem to be a broad awareness around the susceptibility of remote areas to the fluctuation of markets, fuel prices and a resulting need to have alternative systems in place. One thing about food though is that it brings all sorts of people to the table: it is a common need and can be a powerful medium through which knowledge is shared and more localized alternative systems can be created.

Pictured above: J9 Stanton’s vegie patch, with pretty much every leafy green under the sun. There’s a bathtub of pumpkins from last season and she’s looking forward to the ripening of her grapes, figs, and pomegranates.