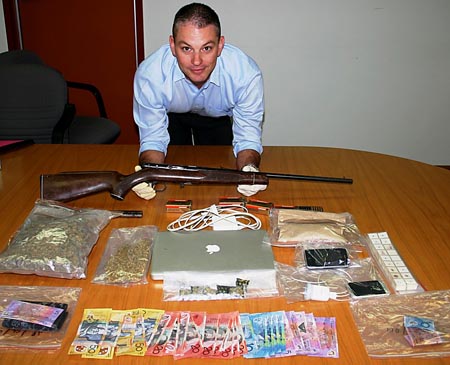 A 28-year-old man was arrested yesterday on drug and firearm offences following a search at Charles Creek Camp.
Detective Acting Superintendent Travis Wurst (pictured) said police conducted a search on the property after receiving information that stolen property was being exchanged for cannabis.
“During the search members located 466.9 grams of cannabis, an unsecured semi automatic rifle with ammunition, an Apple laptop, an iphone, jewellery and a number of other items. The owners for some of the property have been identified and their property will be returned to them soon,” says Detective Acting Superintendent Wurst.
“Another male also received an infringement notice for the possession of cannabis.”
The 28-year-old remanded in custody and is to appear in the Alice Springs Court today.
“This further confirms there is an inextricable link in Alice Springs between cannabis supply and the disposal of stolen property.
“Since the commencement of the Operation on December 1, Operation Thresher Officers have already arrested 17 people culminating in the submission of 24 arrest files, predominantly for property offences.
“They have also issued 28 Summary Infringement Notices for street offences and three Traffic Infringements Notices.
“A further 54 intoxicated people have been taken into protective custody and 110 litres of alcohol has been destroyed.
“To date, Operation Thresher has been successful and has yielded significant results in an endeavour to keep the streets of Alice Springs safe.  We will not release the pressure and will maintain this approach into the foreseeable future.” (Police media release.)

A centre where children at risk must stay until a responsible carer is found: Lambley

LETTER TO THE EDITOR Sir – It is clear the Gunner Government does not have the political appetite to implement a youth curfew, despite considerable...
Read more
Issue 45

Crisis, what crisis? All quiet on the council front

By KIERAN FINNANE UPDATED, see at bottom. It was roughly one hour’s worth of tick and flick – I had to ask myself, was it...
Read more
Issue 45

Spying on Timor: Government, not whistleblowers should be on trial

By ERWIN CHLANDA A local group joined in with national protests against the prosecution starting in Canberra of a whistleblower and his lawyer who exposed...
Read more