‘Affordable land’ in a man-made desert

COVID: ScoMo not here to tell Gunner what to do

Workers on visas in trouble as businesses close

A lonely ANZAC Day, but no less heartfelt

The dawn service, the march, the two-up, the beers (in a group of mates): The pandemic has put paid to these, for the time being. But LYNNE SMITH found a way to keep alive the spirit of ANZAC Day with a story about her grandfather who made history in a very surprising way.

Life without COVID, flies and heat 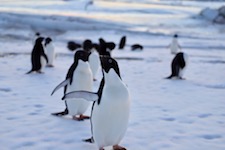 Sick of COVID? Move the continent where there is none. Former Alice Springs doctor Rhys Harding did. He's now the medical Jack of All Trades for the crew of 24 at the Davis Station in East Antarctica, one of Australia's research stations. This is his story. 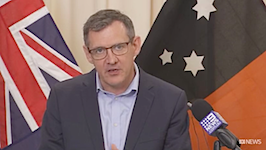 A crude Chief Minister (at left) with the worst budget management on record, since well before COVID: Welcome to the Northern Territory. While Michael Gunner takes kudos for achievements arising from the National Cabinet, Scott McConnell (at right) says there's too much self-congratulation. ERWIN CHLANDA reports.

Chief Minister Michael Gunner in a statement less than an hour ago announced police powers to impose on-the-spot fines of $5495, and he called alleged offenders grub, idiot, and lowlife. Power and water prices for Territory businesses will be slashed by 50% and mandatory quarantine arrangements will be formalised. New measures will be brought in during a special session of Parliament on Friday, with some Members attending remotely.

Although claiming our attention gently, the winning entry is a lovely work by the early career Thea Perkins and its acquisition as part of the Prize will be an important addition to the Alice Springs Collection. KIERAN FINNANE reviews the exhibition, after a privileged visit to the gallery in this time of coronavirus shutdown.

Pine Gap and Five Eyes: what did they know about COVID-19?

Foreign Minister Marise Payne (pictured) has called for an independent review, mentioning in particular the role of China and the World Health Organisation. But what about the intelligence agencies? KIERAN FINNANE reports.

A touch of light: at home among the corkwoods

Police are urging people who have seen two youths in the Nelson Terrace and Blain Street area early on Saturday to come forward.

COVID: Trouble in the bush

High prices, scarceness of food, grog running, breaking of biosecurity laws: The part of the country the NT Government has clearly forgotten in its COVID responses. Now there's a call for the Feds to bring in a 20% point of sale scheme, the CLC's Joe Martin-Jard, supported by Congress CEO Donna Ah Chee, announced this morning. They are pictured above – observing physical separation. ERWIN CHLANDA reports.

UPDATE April 23, 4pm: Minister for Indigenous Australians Ken Wyatt says the Government does not support a direct subsidy or rebate on groceries at this time.

UPDATE April 24, 10am: The National Indigenous Australians Agency to revoke a store licence if pricing and quality expectations are not met, however this power has not been used.

UPDATE April 24, 3.40pm: No comment from the CLC to Mr Wyatt's statements.

Woollies brings back Pick Up of online orders

Woolworth says they have reinstated Pick Up at both Alice Springs and Darwin stores.

By MIKE GILLAM All photos © Mike Gillam Within 15 minutes of the mid-October shower, the first inteleyapeyape (Yeperenye moths) were emerging and next morning the...
Read more

By ERWIN CHLANDA A prominent Arrernte man says there may be $1 billion in the Aboriginal Benefits Account (ABA) but the Minister for Indigenous Australians,...
Read more

By ERWIN CHLANDA The NT Government collected $446m – about 10% – in royalties from $4.6 billion worth of ore sold by the mining companies...
Read more
ABOUT US
FOLLOW US
©