A lonely ANZAC Day, but no less heartfelt 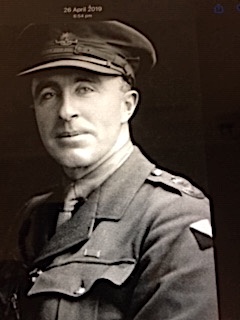 The public dawn service, the march, the two-up, the beers (in a group of mates): The pandemic has put paid to these physical manifestations of remembering the fallen. The Town Council is encouraging the public to take part, from 5.30am in the National RSL Light up the Dawn, standing in your driveway, facing east for a moment’s silence at 6am on Saturday. But LYNNE SMITH has found another way to keep alive the spirit of the day. As a member of the Rotary Club of Alice Springs she spoke to its members about Richard Francis Fitzgerald (pictured), her grandfather, “to honour all ANZACs, and the men and women who have fought in the different theatres of war before and since Gallipoli, I am telling the story of one soldier who played his part”.

He was not a young boy of 15 or 16 who lied about his age or a young boy who ran away to war seeking adventure.

He was 35 years old, a father of two young children, an accountant and pastoralist from Orange in NSW.

He joined as a Private in the Australian Imperial Forces (AIF) – raised in the time of war.

He sailed from Australia on the HMAT Berrima leaving Sydney on June 25, 1915. The journey to Egypt took about six weeks. Soon after landing in Egypt, he was shipped to the Gallipoli Peninsula and landed there on August 16.

In November of that year, it was decided that the Allied forces should withdraw. The campaign was not going anywhere! Troops began evacuating from the peninsula slowly over the next six weeks.

On December 17, having risen through the ranks, Major Richard Fitzgerald received his orders.

Information: (1) Orders have been received for the re-embarkation of the Brigade and the transfer to Mudros.

Intention: (2) The embarkation will be carried out at a time and on the dates to be notified later and during the hours of darkness on two nights.

Arrangements for embarkation: (4) All movements will be made in absolute silence. No smoking will be permitted.  Etc, etc.

Major Fitzgerald was in command at Russell’s Top at midnight on December 20, 1915. He blew the mines and was the last man to leave.

Lt. Caddy who was a member of the rear party wrote an account of the last night in 1932.

This is part of it:

The evacuation proceeded smoothly and by 7 pm, there were only 140 men left on Russell’s Top.

The evening was occupied in telling yarns. Major Fitzgerald OC (Officer Commanding), Capt. Hutchinson, Lt. Broadbent and myself decided to have supper.

During the last few days plenty of good food, the likes of which we had never had before on the Peninsula, was available, and the meal consisted of sardines, biscuits, pineapple and mock cream and soup.

After we finished the table was left laid for the Turks, with a note written by Major Fitzgerald, which read: “Goodbye Jackie, will see you later. You are a good fighter, but we don’t like the company you keep.”

At 3am Russell’s Top was the only front tine post held.   Everyone was now clear of the trenches and Major Fitzgerald, having received permission from the Rearguard Commander, Colonel Paton, by telephone, to fire the mines, instructed me to do so, after he had got on top of the dugout to see the effect.

After slabs of guncotton to destroy the exploders had been set off, and Cpl. Penny had lighted the fuse of the mine on the track leading down to the beach, we made as quickly as possible down the hill and embarked on the last lighter which at 4am conveyed us to the transport standing by a short distance from the shore.

When they fired the last of the mines (which was meant to look like the Australians were still involved in battle), they made their way down to the beach.

The big ships could not be moored close to the beach, too shallow and no piers large enough.

So lighters waited on the shore to carry the men to the larger ships which were anchored further out in the harbour, under the cover of darkness, so that the Turks would hopefully not guess what was going on.

Richard Fitzgerald went on to fight at the Somme. He was awarded the Distinguished Service Order for Conspicuous good service and devotion to duty as Battalion Commander during operations on the Somme. He held the rank of Lt. Colonel by then.

Russell Crowe starred in and produced the film ‘Water Diviner’. I went to see this drama with a friend. The film was based on a novel by the same name and in the film, Crowe meets Ataturk who tells him that after the withdrawal he found a note left by an Australian soldier.

I couldn’t believe it and I just wanted to scream out to the packed house: “My Grandfather left that note!”