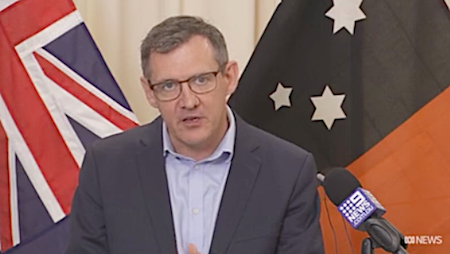 A crude Chief Minister with the worst budget management on record, since well before COVID: Welcome to the Northern Territory.

Michael Gunner (at right) yesterday referred to people alleged to have committed a minor offence as grubs, idiots and low life and then promised police the power to impose on-the-spot fines of $5495.

That’s a lot easier to do than getting right the movement restrictions in the huge land mass of the NT, a task of the NT Government, not of the National Cabinet.

At the moment the system of declared biosecurity areas, travel between which requires 14 days quarantine, is a dog’s breakfast: This could trigger illness and fatalities on a massive scale should the virus invade Aboriginal lands.

Independent Member for the huge electorate of Stuart, Scott McConnell, says the NT Government has simply accepted the boundaries of the Aboriginal land trusts, declared under the Federal land rights legislation, as the boundaries for the biosecurity areas.

This doesn’t work in several instances which in turn is likely destroy the trust in the system and lead to its break-down. The results could be catastrophic.

For example Amoonguna, immediately to the east of Alice Springs, is on a land trust. It is also 15 minutes’ drive from Alice Springs where Amoonguna residents work, shop, access services, go to school, and so on, says Mr McConnell.

The rules require them to go into 14 days of quarantine every time to they go back home.

Unsurprisingly they don’t, it seems.

Something similar occurs west of the town, on the Iwupataka Land Trust, also known as the Golden Mile, and on outstations along the Stuart Highway north of Alice Springs.

At Monday’s Central Land Council media conference it was disclosed that people in the bush often need to travel to nearby communities for shopping and ceremonies, and do so at times without permit.

Mr McConnell (at left) says Aboriginal people in areas are mostly obeying the rules and the system is by and large successful.

Some are not, but that can have several reasons: For example, people from biosecurity areas are permitted to come into town without quarantine.

At a roadblock close to town they are told that they would be required to quarantine on the way back, but the message may not be clear, says Mr McConnell: “Some police officers are doing a very good job explaining this, as are Federal Police and even the Army. They are all doing a great job.

“Others don’t have as much time, maybe if there is a queue of cars. The message is not really getting out there as much as it needs to, but on balance it is working quite well.”

Mr McConnell says he understands the quarantine must be carried out at a government approved locations and under government supervision “but I don’t know that for a fact”.

The Alice Springs News emailed the NT Government’s Covidmedia at 12.11pm today to clarify this point. We will post an update when we receive a response.

Mr McConnell says we all need to recognise that as a good achievement “but I am a little bit concerned that there seems to be too much self-congratulation going on.”

“We are less than 1% of the Australian population. Yet we are in an incredibly powerful position that we have our Chief Minister represented in the National Cabinet.

“We need to stay the course with the lock-downs. Yes, there are some people doing the wrong thing but there is no point in calling people idiots or despicable or whatever.

“We should refrain from that type of language. We’re all citizens, we’re all equals. Let’s not start the name calling.”

Meanwhile another clear issue is this: In a place where unpaid fines mount up to squillions, what is the point of a fine?

Perhaps the idea is that a spitter or cougher couldn’t get a fair trial in a jurisdiction where the top law maker is describing them in the way he has.

So where are the “coughers and spitters on every corner”? They “seem to be” in Sydney, Michael Gunner claimed yesterday. How many are in the Territory? Mr Gunner could only mention one.

The Police Association calls the on-the-spot fines “appropriate punishment … a direct result of successful lobbying by the Association for greater protection of our members”.

The association keeps calling for more police although the NT’s Southern Command, for example, has three times as many officers per head of population when compared with the national figure. That’s not 130%. It’s 300%.

Return to country quarantine must be undertaken at a commercial accommodation facility determined by the Northern Territory Government.

It cannot be completed at a private residence. This is to ensure that the person undertaking quarantine does not come into contact with others and can assure their community upon returning that they have not been exposed to COVID-19 or have any of the symptoms.

As Return to Country quarantine is voluntary, police supervision is not required at quarantine accommodation options. A range of Aboriginal and non-government organisations are supporting individuals to successfully complete their 14 day return to country quarantine period.

The $2500 quarantine fee does not apply to return to country quarantine.