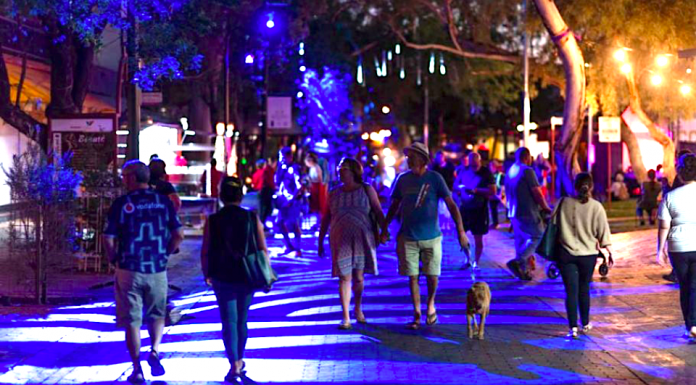 “Parrtjima – A Festival in Light attracted more visitors to the Alice Springs event than ever before and generated almost $10m in economic revenue,” the NT Government’s Major Events Company announced breathlessly.

But why is the the proof not disclosed?

“Independent research” was commissioned by the company, it says in a media handout, which “confirmed the 2021 Festival in Light helped boost visitation, jobs and economic flow-on benefits.”

But when the News asked for the report, this was the answer from Major Events: “Please note the report is not a public document. Elements of the report will be made public in the NTMEC Annual Report later this year.”

After the 2018 Red Centre Nats it claimed in a media release that “15,297 people came through the gates over the three venues,” quoting general manager Tim Watsford.

When MLA for Araluen Robyn Lambley, upon a request from the Alice Springs News, checked the facts through a question in Parliament it turned out that well under half that number of tickets were sold, namely just 6100, a fact suppressed by the government despite repeated questioning from the News.

About this year’s Parrtjima the company said there were more than 23,200 attendances across the 10 nights. Of those, more than 15,300 were unique visitors.

How many of these were locals is not stated.

The release says: “5,200 attendees said the festival was their key motivation for visiting the Territory.”

These were “attendees” and not “unique visitors” which means no conclusion can be drawn about how many were individual people from outside the Territory.

“This event was estimated to directly support more than 13,300 days of employment and 60 full time equivalent jobs.”

How many of these days and people were in Alice Springs and how many were in or from Sydney where the company staging the event is based? It is not stated.

To save journalists the bother of doing their own research the media handout provides quotes from Minister for Major Events, Natasha Fyles (“this research shows investing in events is money well spent”) and Minister for Arts, Culture and Heritage, Chansey Paech (“this event just keeps on getting bigger and better – and we love what it brings in to the Red Centre”).

We have asked both ministers to release the full report immediately.