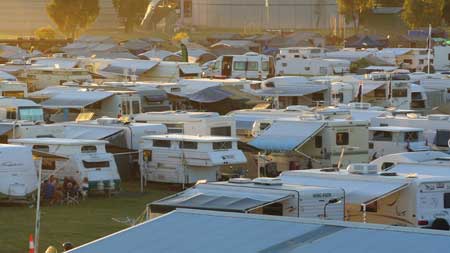 The Gunner Government spin is most insidious when it makes out to be honest and transparent while being anything but.

Caravanners at Blatherskite Park during the Ulysses motorcyclists’ rally in 2014.

Take the revived controversy over cheap caravan sites at the government-owned Blatherskite Park show grounds, and the alleged violation of the “competitive neutrality” principle which requires that a government businesses must not have a competitive advantage because of public ownership.

The allegation was raised by Brendan Heenan, owner of the multi award wining MacDonnell Range Holiday Park, and we put it to Planning Minister Eva Lawler (pictured).

However, that elected politician, who signed off on the decision, refused to comment and instead passed the ball to the unelected but government appointed Development Consent Authority (DCA).

We found this out when we sought comment from DCA chair Suzanne Philip on the occasion of the DCA stopped a company using rural residential land in the Ilparpa subdivision.

She said no, go and talk to the government’s media people. We are a quasi judicial instrumentality and we don’t explain our decisions.

After Ms Philip’s appointment to this key position, which had been the subject of many planning scandals,  I asked the Minister’s minder to arrange an interview. She replied: “There will be no phone call organised with Ms Philip.”

The current conflict is not in the slightest bit helped by the release of the DCA’s Blatherskite decision. It has nothing to say about the issues raised by Mr Heenan and clearly shared by other private caravan park owners around town.

The decision says it is based on “cumulative consideration” of Section 42 of the Planning Act, which refers to Section 51, which in turn has nothing to do with the issues raised.

The decision says consideration was given to “the following (but not the only) factors” – what other factors is not stated.

That’s it. Transparency is one of the many fantasies of a government that pledged to bring order into the mess that for decades has passed for planning and land management in the NT.

By ERWIN CHLANDA "Parrtjima – A Festival in Light attracted more visitors to the Alice Springs event than ever before and generated almost $10m in...
Read more
Issue 1