Home Issue 1 Todd River dam: It's all been said before.
Issue 1Issue 2Volume 23

Todd River dam: It's all been said before. 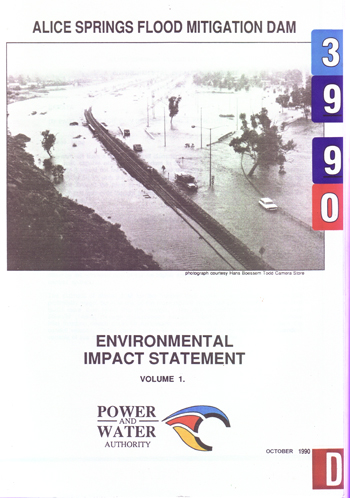 The “Alice Springs Flood Mitigation Dam EIS Volume 1” of October 1990 could not make it clearer: Only a dam at Junction Waterhole, upstream from the Telegraph Station, can save the town in a Todd River flood with a one-in-100-years probability, a Q100.

There seems to be no need then for the new advisory committee to re-invent the wheel. There is every need for urgent government action. It’s noteworthy the Chief Minister has given no deadline for the committee to report.

The 120 page report, of which Alice Springs News Online has a copy, was commissioned by the NT Government’s Power and Water Authority (as it was then called).

It says on page 48: “The dam will achieve the objective of protecting the town … from Todd River floods of an intensity up to 1% (100 year) probability” except for a small area in The Gap of eight houses and Giles House, now Aranda House.

It is widely assumed that a flood of the magnitude described is now likely to happen more frequently as a result of climate change – making effective flood mitigation the more pressing.

The report says: “Flood counter-disaster warning times will be substantially increased by the dam for all floods, and people frequenting the river environs will achieve considerable protection from drowning.

“It is quite probable that no lives would have been lost in the 1988 flood if the dam had been in place.”

Three people were killed in that flood.

The report describes alternatives to a dam, including levees, improvements to the town’s drainage and removal of obstacles, as “limited in the extent to which they reduce, rather than prevent, damage from general river flooding”.

Flood mitigation by the alternatives put forward is “not sufficient”.

Yet these inadequate other measures are two to eight times more expensive and cause damage to the environment in a variety of ways, says the report.

The 1990 document – of course referring to a smaller town – describes consequences of a Q100 flood with the “development levels” in place at that time: It would flood 1063 residential properties and almost all of the Central Business District, directly affecting 572 commercial properties.

“Three lives were lost in each of the last two major floods in the past decade, as well as millions of dollars of property damage caused,” says the report.