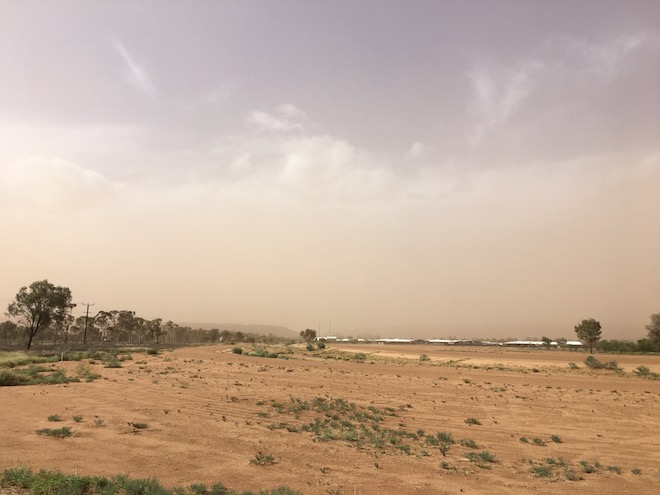 As a doctor working in the Northern Territory for the last 16 years “it is impossible not to see accelerating heat as the greatest problem Territorians face,” says Dr Simon Quilty.

“In the long term it is far more serious than Covid-19.”

Dr Quilty (pictured, photo supplied) moved from Katherine, where he spent eight years, to Alice Springs at the end of 2019. He continues to treat patients here while also conducting research with colleagues at the Australian National University.

The results, to be published internationally later this year, will show clear evidence over recent decades that the NT’s death rates are going up in line with our rising temperatures.

“There is a lot of international interest in what is happening with climate change in the Northern Territory,” says Dr Quilty.

“We have the resources to keep data, and the heat impacts here are so extreme.

“People around the world are watching, because it will help them prepare.”

He sees this as an opportunity for the NT to get on the front foot, showing leadership not only in understanding the impacts on health, but in making the necessary adaptations and mitigating our carbon footprint.

This opportunity is severely compromised by actions such as fracking, which “can only be seen as contributing to climate change,” he says.

“We must do all that we can to keep carbon in the ground. When states decide to frack, that sends a very clear message, that we don’t care about the impacts.” 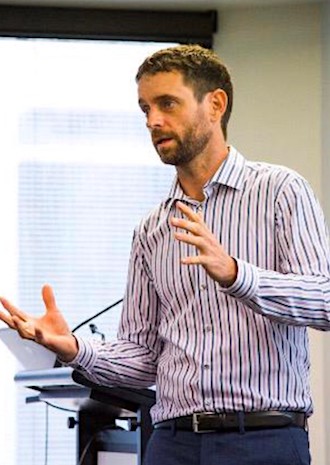 Dr Quilty’s focus on these issues was sparked by seeing patients coming to hospital with heat-related injuries in Katherine, a town that experiences incredibly hot weather.

There has been “a lack of medical voices” articulating the significant health impacts for Territorians but that is changing, he says: “Every colleague is as concerned as I am.”

In the lead-up to the 2020 NT election, this was evidenced when a coalition of health and social welfare organisations called on the NT government to “urgently address the health threats posed by rising temperatures and climate change in the Territory”, outlining policy recommendations, including a Heat-Health Action Plan. The signatories included AMSANT, the peak body for Aboriginal medical services, the Public Health Association, Jesuit Social Services, the Purple House, and NTCOSS.

An emerging issue, not actually mentioned in that pre-election call, is the effect of rising heat on the recruitment of health professionals. This is something Dr Quilty has been looking at with his colleagues at ANU.

As climate change makes the NT a much more challenging place to live in, “it is very much impacting on our capacity to recruit and retain nurses, doctors, and other health staff.”

And this just at the time when increased heat is “killing and injuring on a scale much bigger than has been recognised”.

We already know that Territorians are two to three times more likely to die on a hot day as on a cool day.

When they’re over 50, that jumps to six times more likely.

Dr Quilty’s research will show that these rates are only going one way – up.

People particularly susceptible are those with heart disease, kidney disease, lung disease, diabetes, hypertension as well as the elderly and the very young, with Indigenous people over-represented in all categories.

An important threshold is days over 40. When there’s a run of such days, hospitals see a spike in presentations: “There’s no reporting, but it’s definitely happening,” says Dr Quilty.

In 2019, his last year in the Katherine area, it experienced an extraordinary number of such days. According to the Bureau of Meteorology, Tindal RAAF base, 15 kilometres from the town, recorded 54 days of 40 °C or above in 2019, easily exceeding the previous record of 20 set in 2013.

In 2020 Tindal again stood out, with the highest mean daily maximum temperature for the NT, 35.6 – 1.6 degrees above average.

A difficulty for doctors as they work, says Dr Quilty, is making an immediate correlation between heat and their patient’s condition because they see the patient in an air-conditioned environment. A solution to this, when it comes to understanding the big picture, is to use the readily available technological means to couple death data with large-scale environmental datasets so that impact assessments can be done.

Dr Quilty and colleagues are also calling for death certification to be modernised, with the certifying forms prompting doctors to record external factors, such as extreme heat, contributing to death.

Solid data will hopefully convince governments and communities to make the necessary investments in adaptive infrastructure to prepare for our hotter future. Better urban design, cooling our public places, is essential, but the highest priority must be given to investment in housing.

The NT’s rate of homelessness is the highest in Australia (12 times the national average, according to NT Shelter), and housing standards, particularly in remote communities, are poor.

These issues only “amplify the heath effects” of heat stress, says Dr Quilty.

Images: It was one of those summer days – hot, humid and the air thick with dust – when our poor urban design really made itself felt: at top, the baking, deliberately denuded area abutting the new suburb of Kilgariff; below, view from a window at the Alice Springs Hospital, where I happened to be visiting. It shows the broad unshaded expanse at the entrance – there are planting beds with gravel and rocks instead of plants. 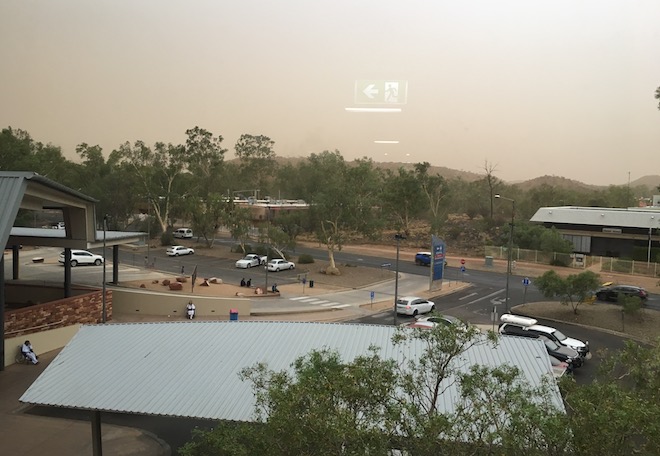