Chief Minister Michael Gunner (pictured) announces initiatives on payroll and utilities, urges council to drop rates, mandates longer periods of negotiation between tenants and landlords and fairer terms so that businesses and households can get through the coronavirus crisis.

Telling the government what to do, nicely 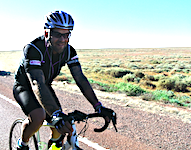 If you think being a councillor is hard work, try riding a pushbike from Alice Springs to Melbourne. First-term local government member Matt Paterson did that to raise $20,000 for Starlight Foundation children in 2012. Now he has his work cut our balancing the Three Rs with holding the government accountable. He spoke with editor ERWIN CHLANDA.

Tomorrow the new government will release its mini budget. Will the statement by Treasurer Robyn Lambley include the answer to the big question: why does governing the Territory, per head of population, cost five and a half times as much as the national average, asks ERWIN CHLANDA.

ABOVE: Room half full or half empty – the small turn-out for the mayoral Q&A suggests the town's flagging interest in all the talk. A few more than shown did arrive. Councillor candidate Matthew Campbell in the front row is not sleeping – in fact he was the first to arrive – we just caught him during a blink.  BELOW RIGHT: Mayor Ryan and challengers (from left) Steve Brown, Eli Melky, Samih Habib Bitar, Dave Douglas. 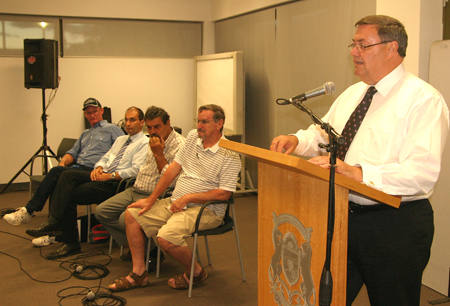 Alice seems to be getting sick of talking. Last night's mayoral candidate question & answer session was a lacklustre affair and poorly attended. If candidates' family and friends, councillor candidates and media had been removed, the Andy McNeill Room would have been three-quarters empty.

The five candidates outlined their campaign message with no surprises. Steve Brown, candidate for mayor and councillor, was the one to come closest to making an speech intended to inspire, nominating the town's biggest single issue as "social inclusion" – a term usually coming from those who would count themselves as his opponents .

To offer residents of remote communities and town camps a way into our community is the "burning issue" for Alice Springs, he said.

Mayor Damien Ryan in his five minutes said creating community events makes the community more "inclusive", and that council is not given enough credit for its program of events. In its next term council should work on having more, he said. In collaboration with Indigenous elders they could include a biennial desert festival, which could be taken to world tourism markets.

The biggest round of applause  for the night was reserved for Kate McMasters, a teacher and 5th generation Territorian, speaking from the floor. She said teachers must deal with negative behaviour in the classroom quickly and firmly, but their focus remains on positive behaviour, building it up with endless feedback. She urged candidates in tackling the issues to start with positive as "it's poisonous out there at the moment". KIERAN FINNANE reports on the mayoral candidates' Q & A.

Using the $100m Julia Gillard earmarked for the "Malaysian solution" to build a center for asylum seekers in Alice Springs, which could become the source of sorely needed labour, and moving closely together the dates of the town's iconic events such as Henley on Todd and Camel Cup, giving tourists a reason for staying longer.

These were two ideas floated, by Robert Gates and Peter Grigg, respectively, at yesterday's public meeting called to seek ways of getting Alice Springs out of its doldrums.
About 70 people turned up for the brainstorming, briskly moderated by Chamber of Commerce CEO Kay Eade and hosted by the Town Council. When she asked how many business owners were present only eight hands went up.
"Where are the rest?" asked Ms Eade. "They are letting the town down." Nevertheless, there was much food for thought. Of course, the value of the initiative will be gauged by what becomes reality.  ERWIN CHLANDA reports. Photo: Monte's is proof that in business, if you have the formula right, success is assured. The dozens of pushbikes tied to the fence most days are pedal powered proof of this.