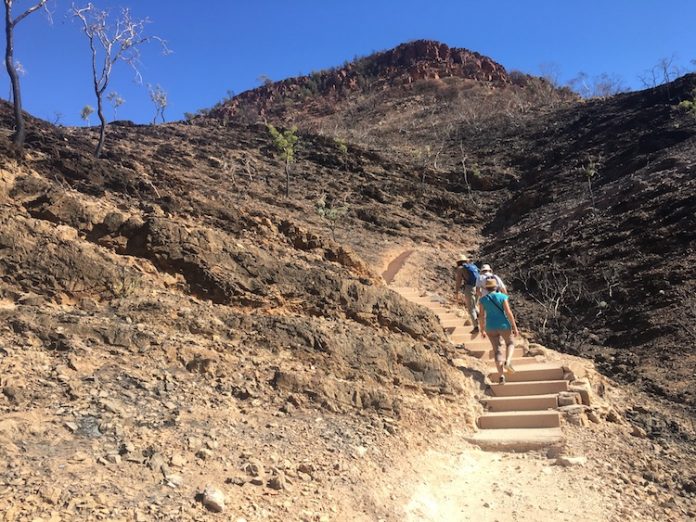 The impending bushfire season will be less dangerous because of the drought but fuel – mostly buffel, which in South Australia is declared a weed – is likely to build up again if La Niña is true to her reputation for bringing rain.

“Buffel grass in low-lying water drainage lines was the major driver” of fire that burnt about half of the West MacDonnell National Park in the summer of 2018/19, according to Josh Fischer, Assistant Director of Bushfires NT.

And he says bringing in water bombers was considered but rejected because of cost-benefit considerations.

It’s clear the landscape itself is not regarded as an asset worth saving, its prime value to the tourism industry notwithstanding.

Fire prevention and fighting is focussed on “life and property” such as rangers houses and buildings linked to the tourism industry.

Yet controlling buffel on the ground is near impossible because of the park’s sheer size. 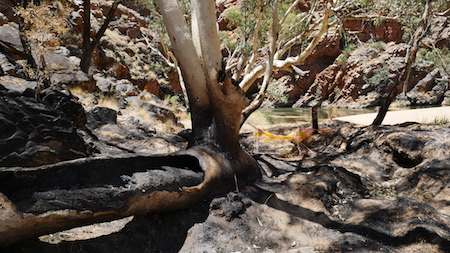 Mr Fisher makes it clear that dealing with fires is the responsibility of the land’s owners: In the case of the park these are the Aboriginal people holding inalienable freehold title under land rights, leased to the NT government’s parks service for management and public use.

In the case of cattle stations the pastoral lessees are responsible.

He says “lots of lessons” have been learned from the massive fires in the 2018/19 summer and discussions are under way right now to formulate strategies for preventing a repeat of the disaster.

What can be done about buffel?

Land owners need to “instal strategic fire breaks whether they be graded, slashed, sprayed or burnt, effectively breaking the landscape up so there are areas of low or no fuel to halt the spread of a wild fire if one is to start,” says Mr Fischer.

This year there was little need for this because of the low amount of fuel, and pastoral land holders needed to keep what little feed there was for their stock.

In the Alice Springs fire management zone during 2017 about 9.4% of the land was impacted by wild fires as well as planned burning.

A lot of “good work” was done by the Central Land Council with Aboriginal ranger groups in the “broader Tanami region”.

NEWS: Had there been not enough planned burning in the time leading up to the West Macs fires?

FISCHER: It’s reflective of the seasonal conditions. If we don’t have the successive rainfalls we don’t have the grass fuels to do that planned burning. A lot of the planned burning that Bushfires NT undertakes on behalf of land holders is within road corridors to prevent roadside ignitions or to be used as strategic lines in the case of broader fires.

NEWS: Should the buffel that drove the West Macs fires in early 2019 have been removed by planned burning six months earlier?

FISCHER: There are a few complexities with that. A lot was in these river and creek corridors with very old and well established river redgums and other native species. Buffel can burn hot year-round which adds some challenges to be able to adequately get in there and undertake that planned burning.

He says much has been learned about buffel control with work in the Todd and Charles Rivers: “A huge amount of work in a very small area.

“When we apply that to the West Macs … a massive amount of work needs to be done.” 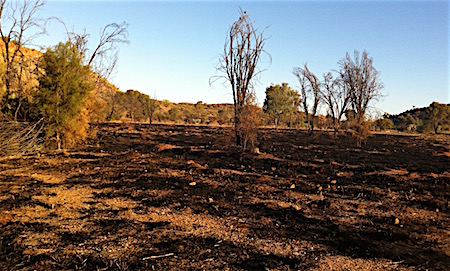 NEWS: Can it be done? There are 600 prisoners in the Alice Springs gaol.

Aftermath of buffel fire in the West Macs.

FISCHER: It’s a good question. They have been utilised in the Todd River and the Charles and there have been good results.

NEWS: Why were they not used in the West Macs?

FISCHER: We are talking about a large difference in scale, a park that extends from Alice Springs all the way out to Mt Sonder, for people on the ground to remove grass from around these trees. That’s a longer term project. There are good outcomes from the collaboration in Alice Springs. If these opportunities [are to be] applied elsewhere, certainly we can have these conversations with Parks and Wildlife, us and the land owners.

NEWS: Are these conversations happening?

FISCHER: They are happening now and not just with Parks but with all land holders. This includes identifying critical infrastructure.

He says what drives fires is not just fuel load but also “connectivity” – one spinifex plant touching another.

Bushfire problems are caused when there are two consecutive above-average rain seasons.

NEWS: Could fire bombers have made a difference in fighting the 2019 fires?

FISCHER: We needed to make a cost-benefit analysis. What are we protecting? Where we use water bombers in the NT we have high value assets, maybe critical infrastructure, through to life and property. We use [water bombers] to give our ground crews the opportunity to get the upper hand.

NEWS: The country in the parks is a prime asset for our tourism industry. Or are we talking mostly about rangers’ houses and canteens and toilets at camping areas?

FISCHER: We’re talking about where people are in terms of where they live, where they work. In Central Australia we don’t have water bombers that are on stand-by and ready through the fire season. The number of fire events does not warrant the contractual arrangements for water bombers on regular stand-by.

NEWS: They can be in Alice Springs in two hours.

FISCHER: If there was risk to life and we had catastrophic fire danger there would be consideration to request the utilisation of these resources. In the West Macs it was determined that it would not have provided any additional benefit in terms of protecting life and property.

NEWS: The airport in Alice Springs has high flow water supply that could fill a water bomber in about five minutes. And the airport has its own fire crew.

FISCHER: There is a huge logistical element. It’s not just putting water into a plane, a whole range of people who need to be qualified. We need rotary wing aircraft to determine where the targets are, as well as ground crews to support that, the foam and retardant supplies. Quoting two hours is not realistic in Central Australia. The closest water bombers are in Kununurra, Darwin and Adelaide.