Fire threat: Where are the big water bombers? 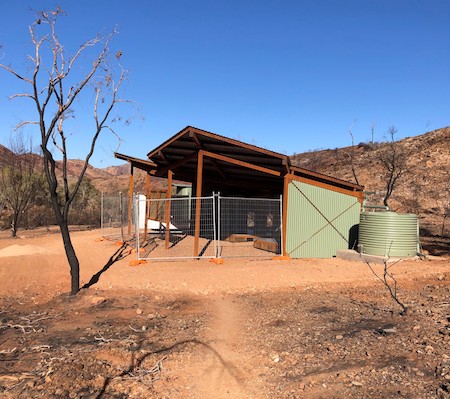 “Enhancing Visitor Experience … the iconic Larapinta Trail has even more to offer visitors thanks to … infrastructure upgrades completed this week,” including this shelter, it’s all part of Turbocharging Tourism, as NT Government propaganda informs us.

The photo (at right) provided is remarkable, not because of the structure it shows, but what surrounds it: Scorched earth, the result of inadequate fire management in January when an estimated half of the West MacDonnell National Park was destroyed by fire over a 17 day period.

And now, as the drought continues, as we are staring in the face of a potentially horrendous bushfire summer. Queensland is beset by dozens of fires from top to bottom. Yet the elephant in the room is still the absence of comprehensive water bombing capabilities in The Centre.

Tourism and Parks Minister Lauren Moss, when asked by the Alice Springs News in April why large fire bombers had not been used during the out-of-control blaze in January, she replied that she had asked “for a full review of the response and where we could look to improve”.

We put to Ms Moss that Darwin had at least some water bombing facilities, but Alice Springs has none. She gave no clear answer.

A fire fighting expert, speaking to the News on the condition of not being named, says the January fire, which started near Standley Chasm, could have been put out in a few hours using large water bombers, in terrain that is impossible or difficult to access for ground crews.

Instead, the fire was allowed to burn in a westerly direction for about 100 kilometres. Fire personnel, including volunteers, on the ground were risking their lives, fighting a losing battle.

The large air tankers are available from the National Aerial Firefighting Centre (NAFC) which was formed by the Australian States and Territories in July 2003.

This national aircraft fleet complements aerial firefighting resources are arranged directly by the States and Territories all of which – including the NT – are participants in the scheme.

The large air tankers are normally based in New South Wales and Victoria and as they are nationally contracted they can be deployed across the country as required.

The News understands there are no current moves to put in place ground facilities in Alice Springs. It appears these are not complicated  – essentially a hose and pump.

Airport manager Dave Batic says about the availability of water: “We well exceed the minimum flow requirement rate of 3960L/min with either our electric or diesel-powered pumps. Our minimum flow rates may vary from local NT standards due to aircraft fire fighting Commonwealth requirements.”

At this flow rate the 15,000 litre tanks of the large planes would be full in around five minutes.

Flying time from Alice Springs to Standley Chasm, for example, 50 kilometres, for a Boeing 737 would be around five minutes. 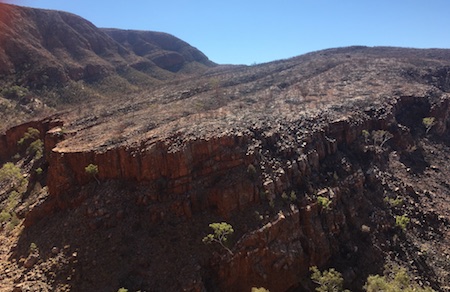 We will report further details about NAFC’s operations. We have also sought further comment from Minister Moss and Bushfires NT.

On Sunday, hundreds of visitors to the Desert Song at Ormiston Gorge were in an oasis of untouched nature, but all around them the country was denuded by fire, recovery stymied by drought. 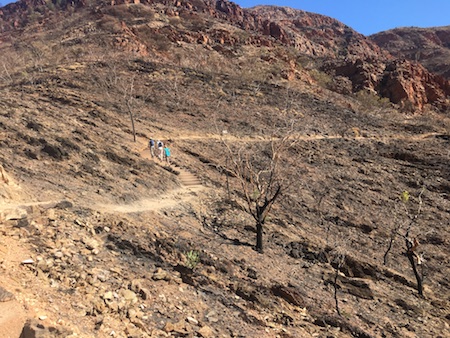 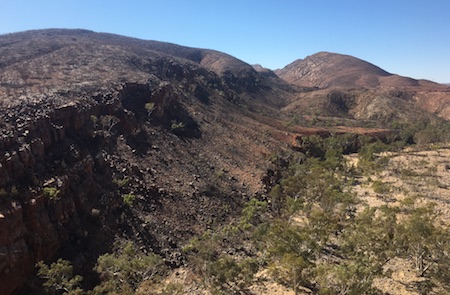 From Airservices Australia: In relation to our Aviation Rescue Fire Fighting Service (ARFFS) – there are two hydrants at the airport that are able to produce a flow rate in excess of 30 litres per second as per the relevant requirements applicable to the provision of ARFF services.  They are tested annually to confirm this flow rate.

Our Ultra Large Fire Vehicle MK8 also has a capacity of 8900L which has three outlets with a flow of eight litres per second.