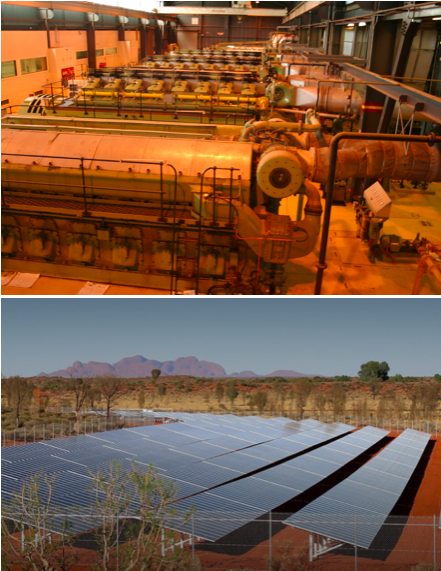 A year ago Alice Springs was sweltering in an eight hour “system black” electricity drop-out prompting the NT Government to sack the bosses of both Power and Water Corporation and Territory Generation.

To consign events like this to history is the objective of Alice Springs Future Grid, a $12.5m initiative funded mostly by Federal sources over two years.

It will start with the roll-out of batteries, including for 50 private users, in parts of the town where voltage problems are acute.

The task is to overcome barriers to integrating renewable energy in the local electricity network and bring security and reliability to the grid, according to a media release.

The scheme will also look at tariff reforms started with the 2013 Solar City initiative.

That provided attractive incentives for private, mostly roof-top producers of electricity. They received power they pumped into the grid for about the same amount it cost the consumer to buy it.

It’s nothing like this today, says Tristan Simons (pictured), general manager of the Intyalheme Centre for Future Energy, the new flagship of Desert Knowledge Australia, and who runs Future Grid.

He says Jacana charges you 26c per kWh but you get only 8c if you sell it to them from a plant installed after April this year.

And, surprisingly, this is the action of a government that wants the NT to be using 50% renewables in 10 years’ time.

At the moment it’s around 10% in Alice Springs.

Mr Simons says Future Grid wants to make sure the consumer is not worse off: “The project will develop new payment arrangements for two years for electricity that is exported from batteries installed in homes.

“The ongoing tariffs after the trial will be something Jacana and the customers will work out.”

This interim pricing will take into account a string of complex factors ranging from the cost of the equipment including batteries, secondary payments, the avoided cost of energy and the relationship between the wholesale and retail markets.

It seems clear Jacana and the NT Government will be calling the shots on the power generation in general, but Future Grid will propose ways that will “incentivise customers to install batteries”.

Mr Simons says Future Grid’s general task is to adapt a “20th century energy system” to work with “pro­sumers” who like myriads of people around the world are both producers and consumers of electricity.

Asked what advances had been made in other parts of the world, Mr Simons says the problems are partly in engineering because solar is “asynchronous, it doesn’t have any big machinery” unlike gas, coal and diesel.

There are also regulatory issues of keeping market structures and technical requirements up to date, given that “the industry moves so quickly.

“And there is the social aspect as well,” says Mr Simons.

“You and I and everybody else in Alice Springs have been putting solar on the roof at a rate of knots. All that ‘behind the meter solar’ does add complexity.”

He accepts that around the world “a lot of people other than I are working in this space”.

“The short answer is no,” says Mr Simons.

“Our program isn’t so much international focussed. Whether the knowledge is shared is a question we’ll have to look at. We do have a watching brief.

“The Com­mon­wealth Sci­ence and Indus­tri­al Research Organ­i­sa­tion (CSIRO) as our knowledge sharing partner has access to the international stage.”

Has the government’s investment of $12.5m been based on enquiries overseas about what has been achieved in the field? It seems not.

The problems in Alice Springs are “very unique and the whole point of the project is overcoming the problems here,” says Mr Simons.

Of the $12.5m, how much will be spent on wages and how much on equipment?

It would be a fair guess that Mr Simons will have his his hands full just co-ordinating the participants and interested parties: CSRIO, Ekistica, Power and Water Corporation, Territory Generation, the Northern Territory Government, Jacana Ener­gy, Desert Knowl­edge Aus­tralia, the Arid Lands Envi­ron­ment Cen­tre, the Australian Renewable Energy Agency and the Regional and Remote Communities Microgrid Fund.

Surprisingly “peer to peer trading” is excluded from the enquiry.

These are neighbouring photo voltaic based producers who share power and the use of batteries – all outside the government-owned grid.

AT TOP: The old Ron Goodin power station in Alice Springs, still in use during difficulties with the town’s supply; and a solar plant at Yulara.