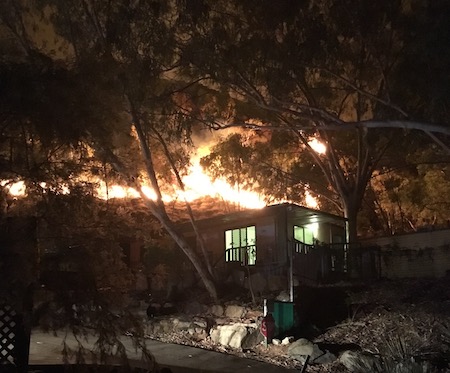 What’s the NT Government doing to prevent another bushfire catastrophe like the one that burned half of the West MacDonnell National Park in January?

An investigation by the Alice Springs News revealed that most facilities are in place in Alice Springs for the use of large water bombers – airport, water and airport fire fighters.

But authorities have still not joined the network though which the large planes can be booked.

In regards to the question about large water bombers, the situation has not changed,” says a spokesman for the Department of Environment and Natural Resources.

And last month were told the Department of Tourism, Sport and Culture “is conducting a review following the bushfires at the Park earlier this year.

“This will inform ongoing fire action plans.” Note the word “will”.

We have asked for a copy of the review but the department has not replied to that request. We assume this means the review is still not finished – with the next fire season well and truly upon us – or it will not be released by the government to the public.

Meanwhile it seems clear Central Australia will be missing out on aa $11m boost by the Federal Government of the country’s aerial firefighting capabilities.

“That’s on top of the $15m we already deliver each year for aerial firefighting to tackle what has already been a devastating fire season.
Boeing 373 water bomber

“We want to ensure our fireys get the aerial support they need and have asked for.”

Minister for Natural Disaster and Emergency Management David Littleproud said in a media release the additional funding would enable annual lease periods of firefighting aircraft to be extended and ensures the right mix and type of aircraft are available to protect communities this summer.

“It is clear we are facing longer and more intense seasons.”

The National Aerial Firefighting Centre has more than 140 aircraft at its disposal to be directed to wherever they are needed, says Mr Morrison’s release.

These aircraft, contracted on behalf of state and territory governments, are supplemented by additional state owned, and state contracted aircraft and other aircraft hired to meet peak demand across Australia.

In total more than 500 aircraft, provided by over 150 operators, are available for firefighting across Australia.

However, Labor says the Morrison initiative “has shortchanged the nation’s fire chiefs, in their attempts to defend communities against bushfires.

Two years ago, the National Aerial Firefighting Centre told the Federal Government that it needed an extra $10.7m per year.

“Scott Morrison’s announcement today is just a one off payment of $11m, for this summer only. It is a band aid solution, not a long term plan.”


UPDATE 12.30pm
A spokeswoman for Department of Tourism, Sport and Culture says: “The report you refer to is an operational document still being worked on / with, not a public document.”