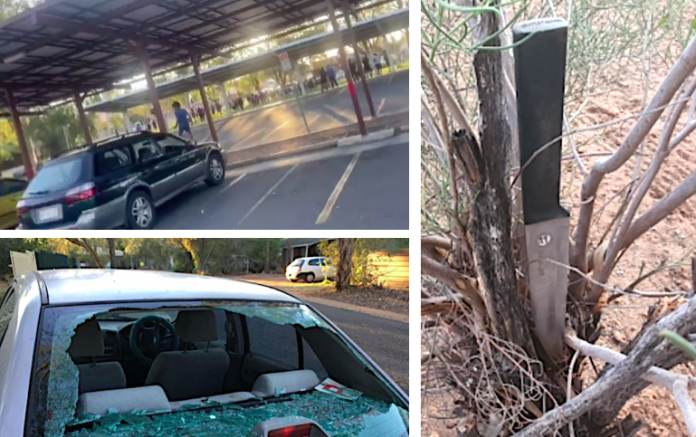 News of a sharp rise in offences “against the person” coincided with the cancellation of Parrtjima events scheduled for the Mall as the town lost control of the CBD, according to Mayor Damien Ryan.

Assaults are up 12%, domestic violence assaults 19% and alcohol related assaults 11% over last year’s figures, according to statistics based on police reports.

The good news is that house break-ins are down 17% as is vehicle theft by 33%.

The recent trouble in the town came down squarely to rioting kids while police are failing to answer questions, their standard response being they can’t do anything unless a crime has been committed (and they find out in time to catch the offenders).

The News put to them some basic questions 30 hours ago – no answer: Does the police consider that children without adult supervision on the streets late at night are at risk? Does the police have an obligation to take action about children at risk? If so, what kind of action is the police taking? (See update below.)

Neither the police nor Parrtjima would give a detailed account of the week-end troubles in the Mall, Parrtjima claiming that “the anti-social behaviour in Todd Mall is a police matter”.

Observers say there was a mass brawl on the council lawns on Sunday. Rock throwing on both weekend days. Cars illegally driven in the Mall.

“We can confirm the anti-social behaviour took place late in the evening, after our event had finished and our patrons had left the site, so they were not at risk,” says a Parrtjima spokeswoman.

The much touted festival in lights is keeping up its evasive routine: Asked specifically about the number of people attending, divided into locals and visitors, we’re getting “attendances”.

That of course is meaningless because a single person can engage in several attendances.

Equally opaque are the references to money. We’re referred to annual reports.

How much of the public money for Parrtjima goes out of town including to the Sydney company providing the spectacle?

Says the spokeswoman: “As is normal in the event world, agreements with our partner organisations remain Commercial in Confidence, to protect our commercial interests.”

About 10:30pm on Saturday night a stolen motor vehicle was driven through the closed area of the Todd Mall in an erratic manner.

There were a few people in the area at the time, including security and festival staff.

Nobody was “driven at” by the vehicle.

Police apprehended the vehicle a short time later. They arrested the 18-year-old driver; the other occupants of the car were aged between 12 and 15.

NT Police continue to work with other government and non-government agencies to address the issue of unsupervised children out at night.

Young people are spoken to by police on patrol, youth engagement officers and youth outreach officers, and in partnership with the Tangentyere bus we try to take the children home.

The parents and caregivers receive a follow-up visit the next day, not only to find out why the children are out at night, but also what sort of assistance the family can be offered to help keep the children at home.