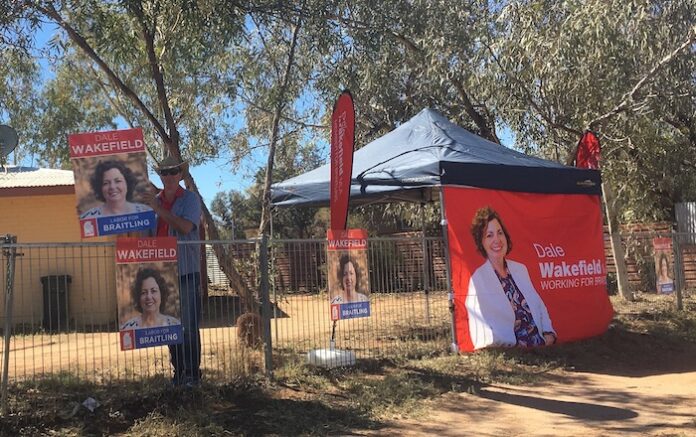 Labor’s Sheralee Taylor is likely to be the new Member for Namatjira, 30 votes ahead of Bill Yan (CLP).

Labor’s Chansey Paech, who did not re-contest Namatjira, comfortably won Gwoja, more than doubling the vote of his CLP challenger Phillip Alice.

It is still uncertain whether Labor will reach the 13 seat majority in Parliament. Some 10 seats are regarded as uncertain.

Based on the current two candidate preferred count Labor would have 18 seats, the CLP four, two Independents and one Territory Alliance.

She looks like being the only Territory Alliance Member in the Legislative Assembly: Even the party’s leader, Terry Mills, has lost his seat.

Burgoyne (1374) was well ahead of Wakefield (843) in the primary count. In the 2016 election she had defeated CLP leader Adam Giles by 27 votes on preferences.

The Electoral Commission says the interim distribution (the TPC or two candidate preferred count) is “of no effect for declaring the result of the election. It is an indicative count only.

“If any of the TCP selections are incorrect on election night the information will be removed from the website and a new TCP will be determined for the fresh scrutiny on Monday, August 24.

“Due to the record number of early votes cast and requirements to social distance at count centres, postal votes will be counted [today] from 10am,” says the commission.

“A fresh scrutiny of all votes will take place from Monday. Scrutineers will have the opportunity to challenge votes during this time.”

PHOTO: New regulations, some relating to COVID-19, put a stop to the usual carnival atmosphere around polling booths. Some party helpers had to resort to private land to make their point.

The Labor Party did not admit media to its post-election function last night. This was because Aboriginal people attending it did not want to be photographed, according to the elected Member for Gwoja, Chansey Paech.