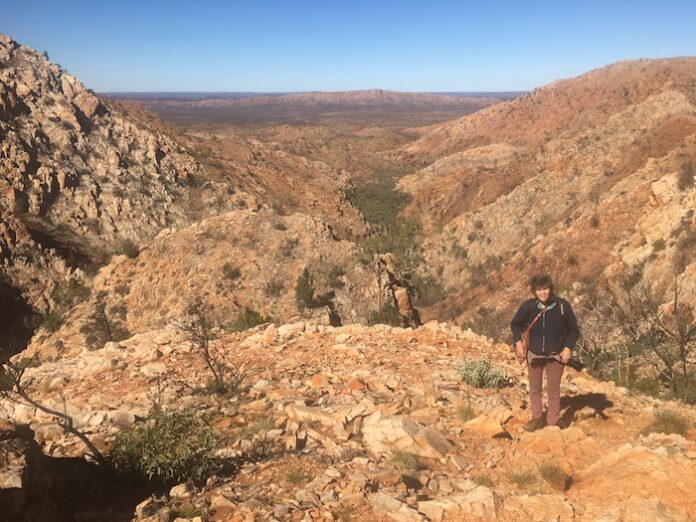 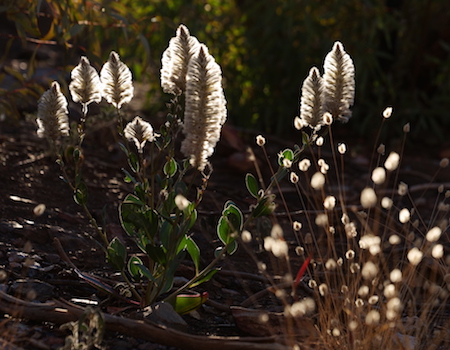 A bushfire tore through the West MacDonnells, star attraction of the new campaign to revive the local travel industry, burning about half of the national park at the start of last year.

Its valleys, gorges, waterholes and stunning mountains on the doorsteps of Alice Springs are one of the highest plant diversity regions in arid Australia, home to the jewels in the crown of our tourism, Ellery Big Hole, Ormiston Gorge and Standley Chasm, its restaurant almost destroyed in the blaze.

On Sunday it was the destination for about a 80 people in cars, and on 36 bikes some 70 members of HOG, short for Harley Owners Group, who raised $800 for the hospital’s palliative care unit with a fun ride.

Locals and tour operators are anxiously monitoring the recovery of the park, and it is a good news – bad news story.

On Sunday Alice Springs News writers walked the gully leading to the chasm, and up Section Three of the Larapinta Trial, to the first summit. We call it the Staircase to Heaven for its superb views.

We were in the company of ethno-ecologist Dr Fiona Walsh (in the photo at top), long-time local, well familiar with the West Macs. She also visited the area with the News after last year’s inferno.

These are some of her impressions from our walk on Sunday. 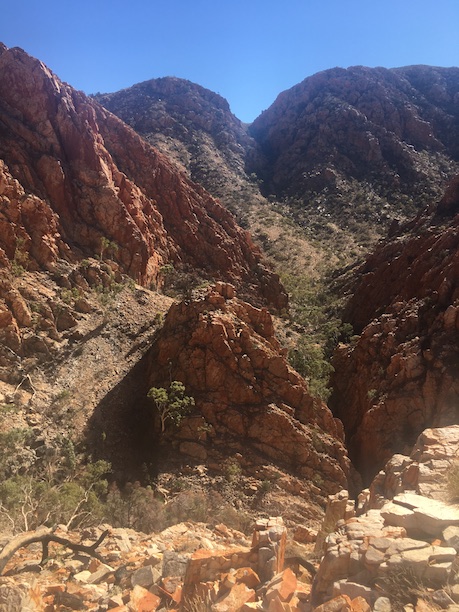 Decimated plants included Callitris pines. A few were only partly burned but most were charred with no signs of regeneration.

In the spring fed waters running down the gorge, which the track to the chasm follows, it looks like the Melaleucas, the paper barks, have been quite strongly affected.

Later, from the summit, we could see a large stand (centre in the photo at left) of the beautiful and restricted Acacia macdonellensis which showed no sign of re-sprouting at all.

Among the plants that show some regeneration are River redgums, Bloodwoods, Spearwoods, Hop bush and Zamia palms show some vigour.

We saw a variety of fire responsive species, like the camel poison with a blue flower, that have been invigorated by the fire, as well as various legume flowers, including the lovely yellow flowered Hibbertia, which is coming back quite well.

To establish the proportion of plant loss would take a much bigger survey.

Some of the River redgums have been so heavily burned that large swathes of bark have shed yet there still is some epicormic growth, growth-buds re-sprouting along the length of the trunks.

There is also this epicormic branches emerging around the trunk base. Even where trees have fallen they are setting up vertical shoots which will potentially become new branches, and, perhaps tree trunks .

The regeneration is strongest along the spring-fed water course (at right). There is less regeneration upslope. Not surprisingly, water is a main determinant in the capacity to regenerate.

There is intensely flourishing vegetation in the creekbed, even more varied than before the fire.

Events like last year’s fire sets off tensions, a kind of push-pull: There is fire nurturing the reproduction of the Australian arid zone vegetation, fire providing nutrients, stimulating re-growth, opening up space for seeds for perennials and other plants to regenerate, that’s fire plus water.

In the creek we saw one patch, about two metre square, that had 12 different species which included grasses, perennial herbs, short lived herbs, glycine, shrubs and a tree.

Most Australian plants have varied reproductive strategies to recover from fire damage – from seeds (sexual reproduction) or re-growth from roots (clonal).

But away from springwaters up slope and down creeklines there appears to be a loss of diversity which is the combination of the number of species as well as the abundance of individuals in species.

With both low rainfall and rain that quickly sheds off naked slope it is even less likely that water can percolate into the soil. There is not the water to allow the plants to readily put up substantive new growth.

Even with the gentle rainfalls since the fires in February last year, rather than big, flushing rains, there are patches of soil and rock slippage. A deluge would cause these soils to slip. So it’s fortunate there hasn’t been heavy rain.

A question was about the availability of food, shelter and habitat for kangaroos, reptiles, birds and other animals who would use these slopes.

After the fires in January last year, that was the really big worry, when there were still three or four months of high temperatures and no re-growth in that hot period. Very harsh conditions.  There is likely to have been declines of these animal populations.

Saying that last year’s fire affected close to half the park is describing a spatial impact.

But then there is the cumulative impact over time. Plants invest biomass into their trunks and their leaves and roots with each fire they lose biomass and energy.

Each time they burn they get worn. The intervals between fires get shorter. Some big events like last year’s wildfires create episodic impacts from which the plants have to come back.

When these events occur often they get depleted, and that’s overlain with this other impact of climate change and dry conditions which compounds the challenges faced by plants and animals.

Their survival is extraordinary. The forces that are working against them are powerful and have different patterns of influence.

Epicormic growth, growth-buds re-sprouting along the length of the burnt trunks.

What about weeds? On our walk we saw Red natal grass, Ruby dock, which we pulled out, Deadly nightshade and swathes of Buffel grass.

It looks like buffel grass was managed in the gorge area but away from the park there is Buffel grass, even within view of the kiosk area, up the slope.

Buffel grass comes back. It regenerates after being grazed, and fires are like a giant animal eating it. The buffel will come back from its root stock, it is a perennial, long-lived grass.

It both invades and re-generates with fire and then fuels hotter fires.

It is wonderful to visit Angkerle Atwatye to see varied colourful plants that regenerate after the fires where spring waters flow but we need to be careful. We cannot assume that elsewhere the plants can recover so easily in these hotter drier conditions. Ongoing care and management of unique wildlife is needed.

The Alice Springs News extensively reported about the 2019 fires in the West MacDonnell National Park, and concerns about the adequacy of fire fighting. Google our site!