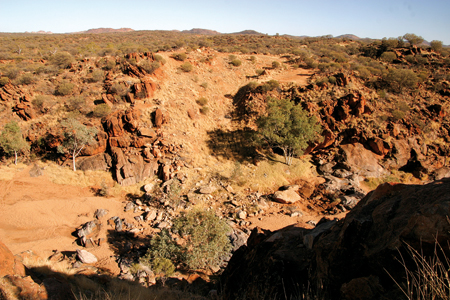 The time period and protracted controversy over the proposed national Aboriginal art gallery for Alice Springs is highly reminiscent of the intense dispute over the proposed flood mitigation dam at Junction Waterhole (pictured), triggered by the major flood of March 31, 1988 and effectively ended by a 20 year moratorium declared by the Minister for Aboriginal Affairs, Robert Tickner, on May 17, 1992 – a decision which from that time on has effectively not been revisited.

The trajectory of the two controversies are uncannily similar; for example, since at least the early years of the Second World War there were a number of proposals for major dams on the Todd River (including Heavitree Gap) and other Centralian river systems, principally for economic development purposes (agriculture and horticulture), security of water supplies, and recreation.

This emphasis changed to flood mitigation / recreation during the 1980s, at first just upstream from the Old Telegraph Station in the early to mid 1980s, but finally at Junction Waterhole by the end of that decade.

By comparison, there have been several proposed sites for Aboriginal CULTURAL centres in or nearby Alice Springs over a roughly comparable stretch of time, from the mid 1980s to the present day: These include a block on Gap Road (now the location of Purple House), Pitchi Richi, the Desert Knowledge Precinct, the vacated Melankas site (my suggestion made on ABC radio in 2011); and most recently a major Aboriginal Art Gallery (as opposed to a cultural centre) recommended at the Alice Springs Desert Park three years ago but rejected by the NTG in favour of the Anzac Oval precinct.

Another site for an Aboriginal cultural centre “and commercial ventures aimed at tourism” was proposed for a 630 hectare perpetual lease east of town given to traditional owners announced in April 1990.

This perpetual lease was announced while a major effort of negotiations with TOs for a revised dam proposal and EIS was underway (released in June 1990).

To my mind this is rather coincidental to the NT Government’s media release below announcing land and investment packages being negotiated with Lhere Artepe Aboriginal Corporation, simultaneous with the LAAC’s sudden letter of support for the Anzac Precinct location for the NAAG, immediately followed by the NTG’s advertisement today commencing the process of compulsory acquisition of Anzac Oval.

Despite this deal in 1990, some TOs continued to refuse permission for the dam site to proceed, and their authority (irrespective of whether they are a majority or not) is paramount: “Aboriginal Areas Protection Authority chief executive officer David Ritchie said it would be extremely difficult to issue a work certificate for the dam construction if it was opposed by one traditional owner” (Custodians say sites come first, Centralian Advocate, July 11, 1991).

Notwithstanding this position, the NTG was determined to proceed: “The $20m Alice Springs flood mitigation dam has been given the go-ahead by the Minister responsible for the Aboriginal Areas Protection Authority, Max Ortmann. Mr Ortmann announced in the Legislative Assembly last night that he would issue a certificate for the construction of the dam site as soon as possible. It is the first time Section 32(b) of the NT Aboriginal Sacred Sites Act has been used to allow a development to proceed against the wishes of the custodians of Aboriginal sites of significance likely to be affected. Mr Ortmann said his decision was a matter of life and death.” ($20m dam goes ahead, Centralian Advocate, March 5, 1992).

It was this decision that led the Federal minister, Robert Tickner, to issue a 20 year moratorium two months later.

Let’s make a few more comparisons between the flood mitigation dam controversy of three decades ago and the National Aboriginal Art Gallery now:

Then – Federal Government was Labor during the period of 1988-1992, first under Prime Minister Bob Hawke but replaced by former Treasurer Paul Keating; now – the Federal Government is Coalition during the period 2017 to present, first under PM Malcolm Turnbull but replaced by former Treasurer Scott Morrison.

Then – the NTG allocated $20m for the flood mitigation dam; now – the NTG has allocated $50m for the NAAG but which requires substantially greater funding sought from the Commonwealth.

Then – NT Labor was critical of the CLP’s mishandling of the flood mitigation issue, especially in regard to negotiations with TO’s; now – NT Labor considers that the approval of a majority of native title holders is all that is necessary for the NAAG to proceed at the Anzac Precinct, notwithstanding the disapproval of key TOs of that site (as argued by the Member for Namatjira, Chansey Paech, during an interview with Stewart Brash on ABC radio this morning).

The comparison of these two major disputes affecting Alice Springs some three decades apart but both at the behest of arrogant Darwin-based governments and supported by local sycophant party members, illustrates just how poorly served the entire Northern Territory is under “responsible” self-government.

Clearly, there is virtually no distinction to be made between the two major parties over time, despite all their bombast and propaganda against each other.

I think it was Albert Einstein who observed that the definition of insanity is to keep doing the same thing over and over but expecting different outcomes; surely the time has come to look for and consider new alternatives.


Facebook
Twitter
Pinterest
WhatsApp
Previous articleCovid-19 and the military: clear protocols in the north, obfuscation in the Centre
Next articleAlice after COVID: Recovery needs to be a team effort