Home Issue 24 Covid-19 and the military: clear protocols in the north, obfuscation in the...
Issue 24Volume 25

Covid-19 and the military: clear protocols in the north, obfuscation in the Centre 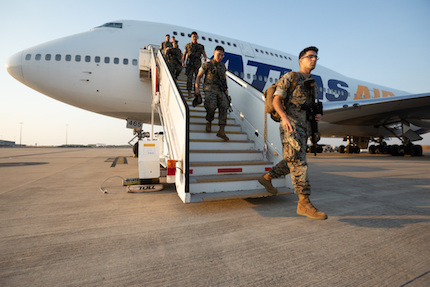 Defence Minister Linda Reynolds has outlined clear coronavirus protocols for the US Marine Rotational Force arriving in Darwin in early June, yet Defence maintains the usual veil of secrecy over incoming personnel to Pine Gap.

Left: US Marines disembark at RAAF Base Darwin, in 2019. Photo by POIS Peter Thompson, Defence Images.

In a statement yesterday Minister Reynolds described the steps each Marine deployed to Australia will undergo:

They will be screened four days prior to departure.

They will then be screened and tested for COVID-19 upon arrival in Australia, before being quarantined for 14 days at specially prepared Defence facilities in the Darwin area.

Each Marine will be re-tested at the conclusion of the quarantine period.

The Alice Springs News asked Defence if this same protocol is being followed for Pine Gap personnel arriving in the NT from interstate or overseas.

We asked this question in the context of the USA’s poor record in protecting its people from the spread of the virus, as well as  reported infections amongst military personnel including in the Indo-Pacific Region. There have been, infamously, more than a thousand cases on board the USS Theodore Roosevelt in Guam, for example.

In reply, we received the usual generalities, from a spokesperson:

“Defence continues to follow the advice issued by the Department of Health and has implemented necessary preventative measures. This is important for the protection of Defence personnel and critical operations, as well as for the wellbeing of the Australian public more broadly.

“The Joint Defence Facility Pine Gap is working with Government and its international partners to implement all necessary protections related to COVID-19.”