Alice after COVID: Recovery needs to be a team effort 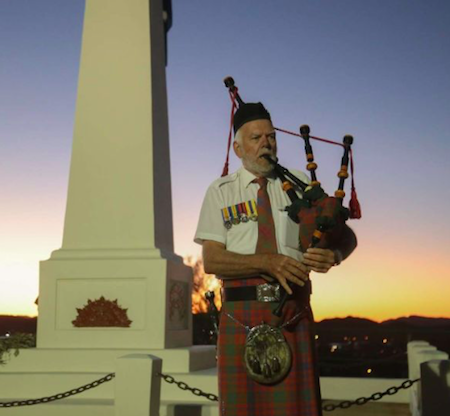 Those most frequently spoken three words of late were also the answer by Neil Ross when we asked him about the COVID battle: Where does Alice Springs stand now? What’s going to happen in the foreseeable future?

Born and bred in Alice Springs he owns and runs, with his wife Julie, the 60 years old Ross Engineering. The family firm had grown to 60 employees some 10 years ago, is down to a quarter of that now, as the town’s economy has been slowing for some time and the owners are inching towards retirement.

Mr Ross devotes much of his time to community activities, including previously stints on the Chamber of Commerce executive and as a long-time member of the Rotary Club of Alice Springs.

His interests – business and community – span Central Australia, with projects in Aboriginal communities as well as the town. The initial development of the power station at Brewer Estate was among the firm’s biggest jobs.

“You’ll have people who will still be getting work in some parts of construction but it is going to be very patchy, I think.

“Some businesses will be doing OK and others will be struggling.”

Mr Ross says an exception is likely to be an extension of Pine Gap, expected to be worth “hundreds of millions of dollars”.

As usual little is known about this except that the work will be “bringing the old girl up to more modern standards”, according to Greg Jenkins, senior manager with AECOM Government Services Australia Pty Ltd, the company carrying out the work.

Says Mr Ross: “And then of course you’ve got hospitality and businesses relying on tourism and that will probably be hurting for years.

“And on top of that nobody really knows what the effect of government stimulus will be.”

NEWS: Rents are being postponed but they remain owed. Will there be a point where some people will face crushing debts?

ROSS: When the lockdown first started I thought the town would lose 20% of its population in the next two or three years. This could possibly still happen because the Territory was facing significant economic headwinds even before the Coronavirus. You still don’t know what the effect of all that is going to be. I really don’t know the answer to that one.

NEWS: What about real estate?

ROSS: You have to think there is going to be a decline in property value and rental income, ultimately. Whether there is going to be a significant decline I don’t know. The rental market wasn’t bad last year. It is tied to the way the town overall is going. The town hasn’t grown significantly for 20 years or so. It will be a little bit smaller in size in three or four years’ time.

NEWS: What will keep it going?

ROSS: You’ve got the underlying demand for services from the communities. The tourist industry will rebound. The domestic tourism obviously will recover quicker than the international. I’m not involved in that space. All I can do is watch and speculate.

NEWS: Should there be major infrastructure projects, other than the base? Flood mitigation comes to mind.

ROSS: There is now possible progress on the art gallery. Any construction project can drive the town but they all have an end date. You looking for something that can fundamentally change the town, something sustainable, new mines, for example. The Granites gold mine is still going ahead with their big extension. Funnily enough, Darwin is getting a lot of benefit from the border closures because a lot of Granites workers have relocated and are staying in Darwin on their R&R. Some of the hotels are getting benefits from that.

NEWS: I wonder why they are not staying in Alice Springs.

NEWS: What other projects?

ROSS: Recycling the sewerage “farm” or energy – these are not what you call shovel ready. That’s years away, a lot of planning. There’s money being spent on the over the horizon radar at Harts Range and there is still some more to be done there. You don’t want to spend money for money’s sake. You want to have a lasting benefit. I support the art gallery. Instead of dividing the town as it is at the moment, it should be an opportunity to unify it. The aspirations of our Indigenous people shouldn’t be too much different to everybody else’s. We all want to see celebration of culture, offer a drawcard that would be an iconic destination of its own.

NEWS: What about Uluru?

ROSS: We should develop a closer relationship with it. We often criticise the government for the amount of money spent on Uluru and Ayers Rock Resort, potentially to the detriment of other parts. I’ve always maintained that it’s up to Alice Springs to identify itself and look for opportunities. Marketing dollars getting people to Ayers Rock are often money well spent because until this shut down the occupancy at The Rock was quite good. There was always going to be a drop-off following the climb closure. Now they have an opportunity to re-brand and re-develop and we should be along for the ride as well.

NEWS: What about the Outback Way?

ROSS: That has an enormous potential. There’s been some sealing steadily going on. But again with the budgetary constraints, who knows what’s going to happen? We’re all spectators here at the moment, hoping that our political leaders are doing the right thing.

NEWS: Who should be driving the recovery?

ROSS: We’ve always wrestled with this. Years ago, when I was on the executive of the Chamber of Commerce, the defence forces came to Alice Springs. They consulted widely with a lot of groups. The question was, what is your vision? Where is the planning for the town? Where should the town be in five years, 10 years, 20 years? Then, as it is now, it was difficult to articulate that. We have so many diverse groups of people and competing interests. The NT Government under Chief Minister Denis Burke [who was an MLA between 1994 and 2005] started the Alice in Ten project, and a couple of others. We haven’t seen this initiative from the current government, but in the end if anything is going to work it’s got to be across all tiers of government. Everyone has got to be on the same page. People perhaps have to compromise a bit about their preferences and views and get that greater good picture. That’s how I look at it, rather than their or their organisation’s interests.

NEWS: Not much came out of Alice in Ten.

ROSS: It was very difficult to get concrete changes out of it. When you think about life-changing things the town could do, it needs broader discussion. Everyone has to support it, has to be on board with it. You could have the Chamber, Arid Lands Environment Centre, Tourism Central Australia all getting together and having the Town Council buy in as well. Successful change needs to come from the community itself, and be driven from the community. People have to want to do it willingly, otherwise they will feel they have no ownership. They will need to see the benefit, the big picture. Everyone turns up in the morning to do the best for the town. At the moment perhaps we should sit back, take a deep breath and look at it through fresh eyes. Obviously this pandemic is a wonderful opportunity to go back, reset, rethink, and talk to our neighbours with a more accommodating viewpoint.