Stem tide of waste with craft and imagination 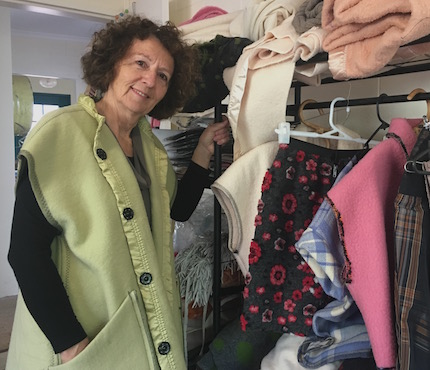 It’s that time of year again, when Alice audiences are treated to the product of many hours of careful craft and myriad moments of imaginative inspiration, when a piece of wood takes flight as a mythical bird, when an old blanket transforms into an elegant suit.

This is the flourishing Sustainable Couture event and everything that has grown from it. It started with a catwalk show and sale at Central Craft.

That has become an annual sellout fixture at the aviation museum, with pop-up shop, and now offshoots, the Lost and Found exhibition, which opens tonight, and the arts trail, a tour of local creative hotspots, which will follow next month.

One of its driving forces from the beginning 11 years ago, Franca Frederiksen (above, wearing one of her creations), gave me a quick tour of her studio yesterday before heading in to The Residency to help install Lost and Found.

My eye immediately fell on on fabulously patterned and coloured woollen fabrics (below): one she’d cut into a loose vest, with a draping effect around the neckline; another into a smart short skirt; and more.

They’re “sustainable” in that the fabric is wool, she explained, but they’re not recycled. She bought the Italian-made fabrics new – she couldn’t help herself – from a shop in Germany where son Alex now lives.

These creations will go into the pop-up shop but won’t be part of the parade, which sticks to its core principle of repurposing materials that might otherwise be wasted. 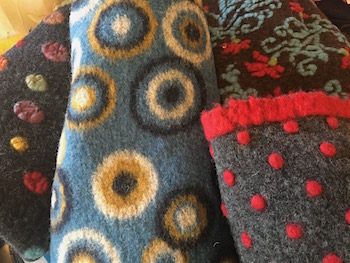 The parade’s theme this year is “ All in the Same Boat”.  Spelling it out: “We’re all responsible for the health of the planet, so let’s do our bit to help stem the tide of waste.”

Franca’s speciality in this regard is the old blanket. From just one, in pale green, she has created a sleeveless swing coat, two straight-cut skirts, a super-long vest, and a hat.

She delights in telling the stories of where things come from. On the hat, for instance, is a jaunty adornment that is actually folded fine rice paper from an old Korean book.

There was a rack full of such creations in the studio ready for the big night on June 27; every one has a story.  With a number of them, Franca has taken the “same boat” theme further: “We are carrying precious cargo,” she said by way of cryptic explanation. All will be revealed on the night. 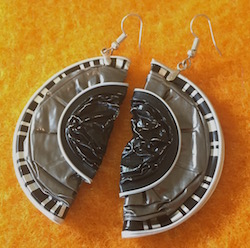 She’s wearing a striking pair of earrings (left) and delights in making me guess what they’re made from: recycled coffee pods. These are the creation of Natalia Rodrigo, one of four interstate designers coming for the show.

From the original crew, only Carmel Ryan joins Franca this year, but the show is living up to its name – sustainable – with new faces coming on board from Alice (four) and Darwin, where Carmel has relocated, and is joined by another four coming down this year.

Carmel’s luxuriantly decorative touch is also featuring in Lost and Found, detail below of one of her “Birds of a feather” creations.

The exhibition features a range of local artists including some who contributed to the recent Youth Recycled Art Prize, Keringke Artists, Tapatjatjaka Artists, and some men, all of then working with upcycled and repurposed objects. 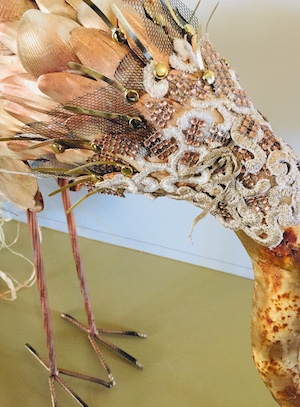