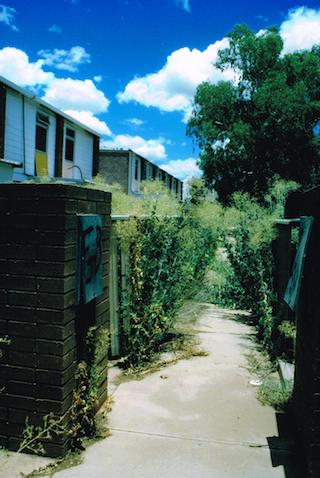 A group of 20 Gillen residents met yesterday to discuss the ongoing law and order problems associated with the Department of Housing Keith Lawrie Flats on Bloomfield Street, Gillen.

It is an old complex of 25 flats built in the 1970s. They have been notorious for extreme violence, vicious assaults and even murder over the years.

Although there has not been any loss of life at the Keith Lawrie flats in recent years, they continue to be a centre for heavy drinking, drug dealing and extreme anti-social behaviour.

The purpose of the meeting yesterday was to discuss what can be done to put an end to this long term source of misery for residents and neighbours.

The idea to call for a public meeting came from a long term resident of Bloomfield Street, whose life has been dominated for many years by the constant assault emanating from the Keith Lawrie flats.

Most of the people who attended the public meeting have lived in the neighbourhood around the Keith Lawrie flats for many years – some as long as 40 to 50 years.

These people expressed how completely and utterly fed up they are with the daily screaming and yelling; the fighting; the daily visits by the police and ambulance to the flats; the daily “drinking parties” in the complex; and the endless stream of visitors disrespecting the rights of residents.

One couple described how they come home from work in the afternoon and all they want to do is relax in the peace and privacy of their home. But from 5 o’clock onwards, they said the noise and dramas starts, every day of the week.

Three Aboriginal women who reside in the Keith Lawrie complex attended the meeting. These women provided an important insight into just how traumatic it is to live in such dangerous circumstances. They told us how they “live in fear” describing daily occurrences of alcohol fuelled violence, break-ins, loud parties and visitors taking over the common areas.

One lady has lived at Keith Lawrie for almost 10 years. She told us she cannot endure the stress any longer and is about to be moved into another Housing Department flat in Alice Springs. Another lady talked about how she deeply fears for the safety of her teenage daughter who lives with her in a Keith Lawrie flat.

Everyone agreed that people living in and around the Keith Lawrie flats have suffered for too long. People agreed that this is a “highly dangerous” neighbourhood and that it is just a matter of time before more lives were lost at this complex. Some people talked about how as they get older they don’t want to put up with this level of hostility and violence every day. Living in this neighbourhood, it is as though people are denied the right to a safe and peaceful existence.

One neighbouring resident has started a petition asking that the whole Keith Lawrie complex be demolished. The group agreed that this was the best outcome for all concerned. They agreed that it was time that the Department of Housing completely bulldozed the whole complex.

Nothing had worked to resolve these extreme law and order problems in the past and there was no reason to believe anything would work in the future. Demolition ends it all.

A second option was discussed, that of the complex being privately sold off like other big public housing complexes have been over the years. About 15 to 20 years ago numerous large Department of Housing unit complexes in Alice Springs were sold off to private investors, immediately resolving the extreme law and order issues that existed just as we have at Keith Lawrie now.

The meeting resolved to write to the Minister for Housing stating the specific concerns of residents and a list of demands.  The residents hope to meet again in 2018 with representatives from the Department of Housing and the Police to have their concerns directly addressed.

As the local Member of Parliament for this area I have been campaigning intensively over the past 15 months to get the Government to take action to resolve the problems at Keith Lawrie, as well as the Mokari Flats on Nicker Crescent and Ashwin Street. The Mokari Flats are also in an appalling state of disrepair and have the same serious law and order problems.

The entrenched poverty and patterns of anti-social behaviour of people frequenting these ghettos cannot be resolved by a lick of paint and some extra lighting, which has been offered as a solution to the problems in the past few weeks by the Department of Housing.

A far more dramatic approach is required to break, completely sever, the cycle of abuse and crime that defines these public housing monstrosities.

By GEOFF MIERS Ready for something bigger in your back yard? Central Australia has some fantastic trees suitable for the home garden. The iconic Ghost Gum...
Read more