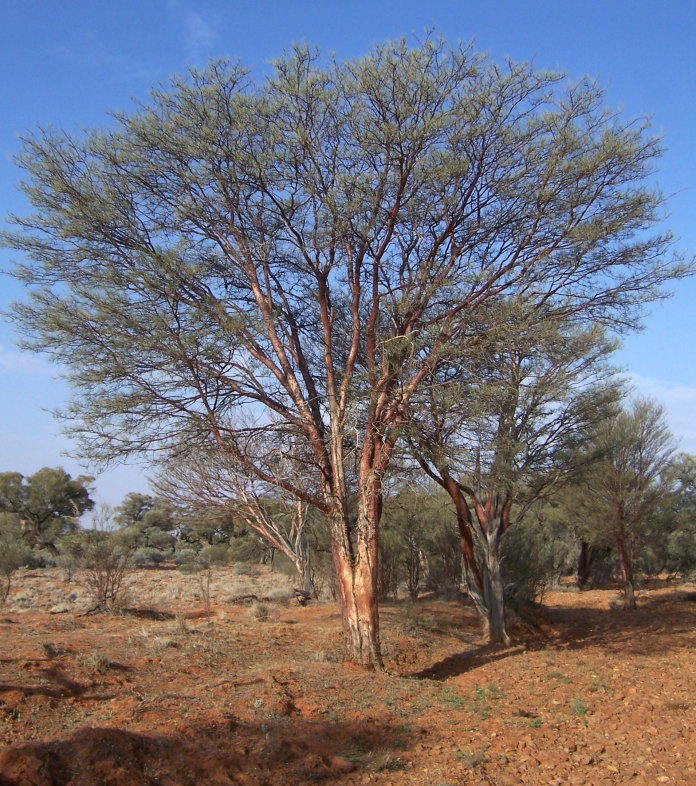 Ready for something bigger in your back yard? Central Australia has some fantastic trees suitable for the home garden.

The iconic Ghost Gum or Corymbia aparrerinja is a tree made famous by Albert Namatjira with his Twin Gums painting and because of its striking, sometimes noble appearance, frequently appearing in Aboriginal dreamtime mythology. 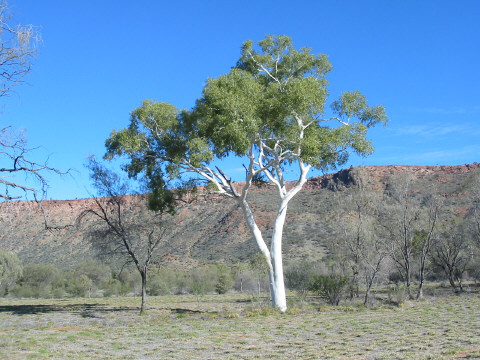 The Ghost Gum is a slow growing tree that will live for centuries. By planting one you would be leaving a lasting legacy to the town’s street-scape. Growing to 15 to 20 metres it is a large tree most noted for its white trunk after approximately eight to ten years.

The Ghost Gum (at left) grows in most soils found naturally growing in open sandy country and in rocky areas. One grows proudly in the centre of my front yard as the dominant tree.  While I have a relatively small urban block it is planted right in the middle of the front yard and will not impose itself and become a nuisance to the neighbours.

This tree is really only suitable for reasonably large blocks and should only be planted within the block and not along the boundary and where it would annoy others.

While presently largely unavailable the Thozet’s Box or Eucalyptus thozetiana is Central Australia’s alternative to the Lemon-scented Gum.

It is a tall, generally straight growing tree reaching 12 to 15 metres in height. This tree can be found growing along Larapinta Drive from the Caltex Service Station almost all the way out to the Desert Park on the southern side.

Thozet’s Box is a relatively quick growing tree that will give height and a strong vertical feel to your garden. It can be used as a single specimen tree, be planted in a cluster or can be used as an avenue tree.

Thozet’s Box will grow in a diverse range of soils found growing naturally in south-eastern Queensland and in the MacDonnell Ranges on the Gardens Station. The tree has an attractive smooth bark which is often striped pink and grey.

It’s a fantastic tree for the smaller garden and complements being planted with several larger trees when used in a larger landscape. Planted as a group this tree works well in a cluster of three to five trees. It’s one of my favourite Central Australia trees.

The common Mulga, Acacia aneura, is a drought hardy tree that suits difficult and varied soil conditions. Bower birds love building their nests in a grove of these trees and they generally burst into flower with yellow blooms after a decent rain. They can be found flowering now in response to the relatively wet summer we have just had.

The Mulga grows right throughout Central Australia, is extremely drought tolerant once established although it almost becomes dormant in periods of drought but bursting into new life following rain.

Acacia cyperophylla or Red Mulga is one of my favourite Central Australian trees most noted for its flaky tan or red-brown minniritchi bark (at right). It generally is found growing along water courses in Central Australia, sometimes in rocky hill country again along stream courses.

A cluster of these trees can be seen growing in the central visitors centre at the Alice
Springs Desert Park, growing almost in a circle these small to medium trees provide a great shade canopy with seating underneath this group planting.

For a quick growing medium sized tree you can’t go past Acacia holosericea, commonly referred to as the Candelabra Wattle. A fast growing spreading small tree to a height of three to four metres it has large elliptic greyish / blue / green broad and long leaves, bears yellow rod-shaped flowers that are followed by masses of twisted pods which are a feature of the plant even after the seed has fallen.

It is generally adaptable in cultivation, responds to sunny, reasonably well drained positions in most soils. Spectacular foliage plant, it can be pruned to maintain a rounded shape.

Acacia jennerea, the Coonavittra Wattle, is a very quick growing small tree three to four metres high. This tree being characterized by pendulous foliage, red bark on its trunk and branches particularly when the tree is young and it has brilliant round ball rich yellow blooms in late Autumn to early winter. It is currently now coming to an end of its flowering time this year.

The Coonavittra Wattle is a great bird attracting plant when in bloom and when setting seed. Tolerant of many soil types it is quite drought tolerant and generally can be termed a hardy fast growing tree.

It can however sucker which can become a problem, however many native plant lovers love the fact it can sucker and you can literally end up with a small grove of them.

One of Central Australia’s most attractive trees is the Callitrus glaucophylla commonly called the White Cypress Pine. A most attractive foliage tree, small in height and over time has been prized for its timber qualities.

Growing only four to five metres this tree tolerates the most extreme conditions being found on the highest reaches of the MacDonnell Ranges. It is a small resinous tree with small foliage that is scented and can be coloured smoky blue to greenish-blue.

While a relatively slow growing tree its form warrants planting as a single specimen tree, as a hedge row/wind break or as a container plant. It is Central Australia’s native Christmas tree.

For the rural block it is ideal as it’s resistant to termites. It is also prized as it is resistant to marine worm and the bark has a high tannin content. A hardy tree able to grow in diverse soil conditions it will grow in full sun or light shade.

The Round-leaf Mallee is noted for its grey blue foliage that works well as a foliage plant in the landscape. Fast growing and hardy it grows well in clay and rocky slopes and makes for an excellent windbreak, screen and hedge plant.

There are many more that could be added to this list, their availability being generally the only restriction on the home gardener introducing them into their gardens.