Home Issue 10 Breaking the violence silence: at home, around the world
Issue 10Volume 24

Breaking the violence silence: at home, around the world 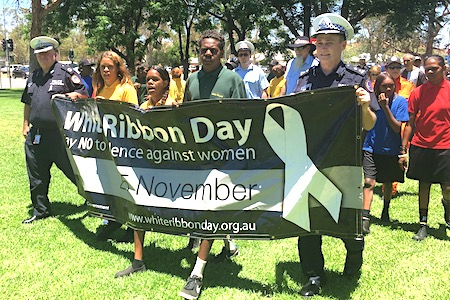 Sir-  Thanks for breaking the violence silence.

We were doubly proud of so many people breaking the silence about violence in Alice Springs last Friday morning (24 November 2017).

Thankyou Alice Springs for continuing to break the silence about violence of men against women. It was inspiring to see so many police and welfare professionals with the wider community on the White Ribbon Day march from the Court House to the Council Lawns. There we stood and pledged aloud to prevent violence against all women in our local community.

Thankyou also the five Peace Pilgrims for continuing to break the silence about the violence by the Australian and United States governments who allow the Joint Defence Facility Pine Gap to conduct secret drone assassinations. Many innocent women, children and men die from these missile attacks.  Attacks on some countries that are breaking international law. They may even be classified as war crimes. 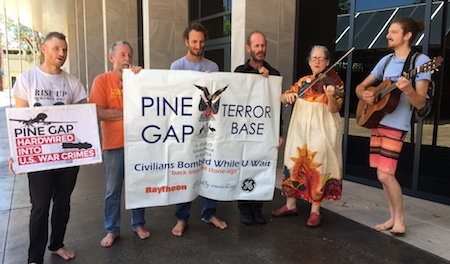 With amazing coincidence, the White Ribbon Day march passed in front of our new Alice Springs Supreme Court at the very same time as the five Peace Pilgrims were found guilty of trespassing on land used by the Joint Defence Facility Pine Gap. The jury had been instructed to not consider the defence argument used by the Peace Pilgrims, that they had acted to protect many innocent people who continue to be at risk of the escalating emergency created by drone warfare in many countries around our world.

Thankyou to the Australians who have already taken a stand to break the silence on violence against women in Central Australia. Thanks also for those who broke past silence around sexual abuse in military training institutions, the church and other institutions.

We look forward to the day when our police and military also choose to use our democratic freedom to stand with many of us to break this global silence about our government’s support for the institutionalised violence of drone surveillance and missile attacks, especially in countries where we are not at war.

Thankyou White Ribbon Day marchers, Peace Pilgrims and all who break the silence about violence wherever it occurs locally, nationally or around our world.


Note: All six Peace Pilgrims will be sentenced on December 4.