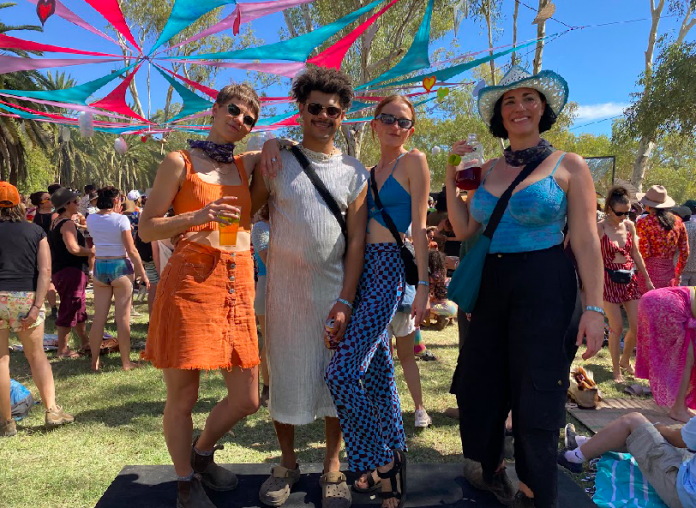 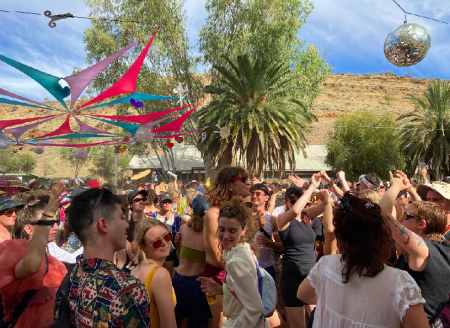 Despite my intimate, lifelong connection with Mparntwe – Alice Springs I’ve lived mostly elsewhere, and so 2021 was my first time attending the iconic Wide Open Spaces festival.

For this adventure I was lucky enough to be engulfed by a sprawling group of experienced WOS-goer friends.

My enthusiastic companions had enough wisdom to pack not only a gigantic gazebo and floor mats, but also a couch, daybed, fairy lights and even a pot plant, to domesticate our three-night camping spot on the banks of the Ross River.

This eastern-most camping area was dusty, treeless, and furthest from the stages and festival stall; however, it boasted more Red-Tailed Black Cockatoo action than I’ve ever seen in my life, and stunning views of the ranges on all sides.

West towards the gorge was a second campsite, and yet further west, across the dry riverbed, lay the most coveted camp location, right behind the festival stalls and stages.

Nestled in amongst the hills, amid a grassy clearing shaded by gumtrees, this area became known amongst my friends as the CBD of the festival. After dark, fairy lights and vaguely-cosmic sculptures lit the path for campers to make their way between these adeptly-assembled shanty-towns.

The entire event took place on eastern-Arrernte country, and we were formerly welcomed by members of the Ryder family on each day of the festival.

The welcome-to country on Saturday was particularly powerful, with audiences treated to a dance by three eastern-Arrernte men (two of them under twenty years of age), decorated in traditional ochre paint, as well as traditional singing.

The festival zone consisted of three stages, a bar area that utilised a token-system, and a string of stalls selling food or local clothing wares.

A large stand of recently planted young palm trees will one day contribute to the festival’s bounty of shade. 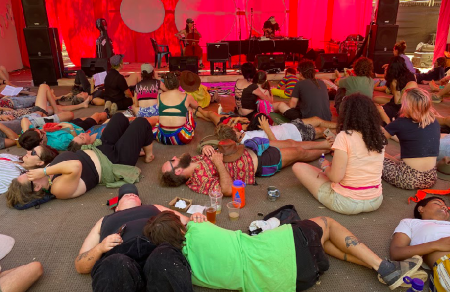 Although WOS was subject to an influx of interstate visitors, the festival was predominated by the close-knit community of (mostly non-indigenous) inhabitants of Mparntwe.

Friends of mine who live and work in town could barely take a step without running into a colleague, friend or neighbour.

Young parents with small children abounded, including babies under one year old.

The remoteness and spirituality of the surroundings created an atmosphere of solidarity amongst everyone present. The feeling was undoubtedly intensified by the preceding year of Covid restrictions, and the indefinite halt on live music festivals around the world.

Festival organisers and performers exuded a triumphant energy during their time on stage.

For myself, and I’m sure others too, most of the artist names listed on the festival programme were unfamiliar and fell outside of my usual listening taste.

But these were not usual listening circumstances, and I welcomed the opportunity to have my musical tastes expanded and reformed.

On Friday night I was blown away by the line-up on the wide stage: Local legend Hugh Winterflood (formerly Skanks), hip-hop sensation Briggs with his three-piece band, followed by the Southeast Desert Metal Band.

During Briggs’ performance I found myself quite incidentally walking with a few friends along a dark, unpopulated path a few hundred metres back, going into the bush.

From there, I could appreciate the incredible juxtaposition of Briggs’ contemporary sound with its angry lyrics buoyed by an energetic beat, echoing around ancient rock formations glowing purple from the stage lights.

Stage presence at WOS was generally huge, but the delivery by Southeast Desert Metal Band was more entertaining than almost any live gig I have ever seen. 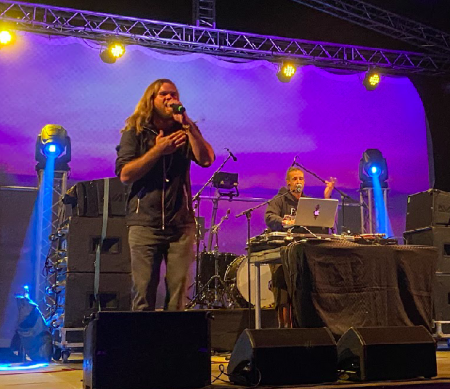 I was struck by the obvious thought that a documentary needed to be made about these fellas – luckily, the task has just been completed by Chili Films.

Desert Metal Dreaming will have its premier at Darwin International Film Festival in the coming week (keep an eye out for Mparntwe screenings in the future).

During the performance, one of the film’s directors, Pirate (aka Nicholas Rositer) grabbed the microphone and let out a blood curdling scream, while another band member poured his schooner of beer over Pirate’s head in a show of deep affection.

After their set we saw a female DJ from Perth called DAWS, whose two-hour set blew up the dance floor.

The day was hot, and the arctic pool a welcome addition – I slipped away by myself for a refreshing dip before everyone’s filthy feet turned the pool water into Gazpacho.

Afterwards, back in the CBD, I was very pleased to catch Docker River Band on the wide stage.

Hailing from Kaltukatjara country, the band have been popular at Territory festivals since their formation several years ago, delivering a unique iteration of that distinctive central Australian sound, reminiscent of bands from the 1980s such as No Fixed Address and Warumpi Band, the Areyonga Tigers, and sounds that have come out of Mtuitjulu’s UPK recordings.

This was aptly followed, a few hours later, by a performance by Darcy Davis in his band Purple Patch.

Darcy has continued in the footsteps of his father, Bill Davis, in producing, recording and mixing music by remote indigenous bands, including the most recent UPK album release, UPK 6 (2019).

On Sunday, the atmosphere was tired and content. I was eased into the day with a lovely set by local, queer, experimental-ambient musicians Hextape, RN Lucarelli, and Slumberkitty.

As an ambient synth / electronic music fan, I was particularly enjoyed Slumberkitty’s live looping of the electric guitar, adding distortion to an increasingly complex, shoe-gazey melody.

It was a pity that the power cut out towards the end of their set, but I’m glad I had the chance to thank them on the dance floor later that night (one of the great aspects of this festival was the porous distinction between performers and festival-goers).

Another distinguishing element to this festival was the incredible feat of enticing all remaining attendees to undertake a kilometre-long walk deep into N’Dhala Gorge upon the closing of the festival at sunset.

Hundreds of people made their way down to a sandy clearing gilded with blazing orange cliffs, where the local choir sang for what looked to be the most concentrated audience of the whole weekend.

A traditional owner, Marie Ellis, sitting cross-legged in the sand, took the microphone and instructed everybody to “close your eyes and mouths.

“We have all gathered to farewell beautiful country. To thank the ancestors for the awesome spiritual weekend, and to embrace happiness. 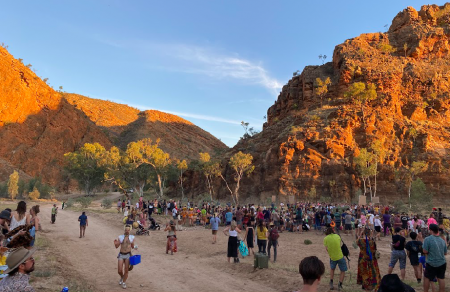 “I want everyone to embrace and share your experience with family and friends. My home is the desert with its wide country, growing tall; and its ancient, ruined castles, the mountains and hills. My country is the desert with its flora and fauna like an ancient Persian rug with its beautiful colours, like a tapestry art. My home is the desert: harsh, hard and unbearable. I am the desert. Some call me the dead heart of Australia. However, if you listen carefully, you will hear my heart beating. Thank you.”

She then made a special tribute to “a recently passed family member”, David Nixon, a local filmmaker who succumbed suddenly to a cancer diagnosis last year.

Upon leaving the site, we were encouraged to continue to our festivities amongst the various DJs who took dancers into the night.

PHOTO at top (from left): Steph Bodle, Jamie Toyne, Lily Alexander and Kate Argentino. All photos by the author.