The 'tough gig' of doing things the right way 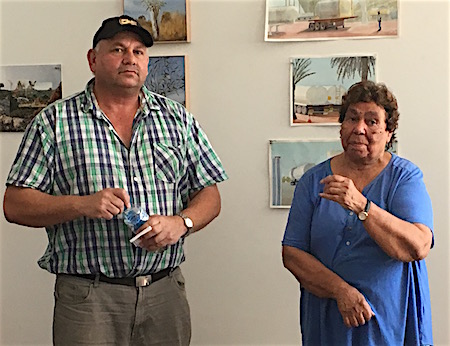 In a unique partnership, apmereke-artweye Doris Kngwarraye Stuart and artists Dan Murphy and Lucy Stewart have been conducting tours of Mparntwe’s sacred sites for the past nine years.

Supported by the artist-run initiative Watch This Space, the occasional tours cater mainly for artists, both visitors and locals, with a view to informing and inspiring their creative endeavours while on this country.

No money changes hands. Mrs Stuart regards the work as her “sacred duty”.

Over the years some 700 people have enjoyed the privilege. The number includes a few repeat participants although generally the trio ask those who have had the experience to make way for newcomers.

Last year Watch This Space acknowledged Mrs Stuart’s generous and invaluable contribution to “deepening understanding, contributing to and extending the contemporary cultural conversation in Central Australia and beyond” with the award of its annual prize, The Lofty.

Named in honour of the Space’s founding coordinator, the late Pamela Lofts, the award comes with an exhibition opportunity at the Space, usually in the lead-up to the next year’s Lofty. So Mrs Stuart did what she always does: together with Mr Murphy and Ms Stewart, she conducted two sites tours for artists and writers. The work done in response was then put together for a week-long show just concluded.

At the opening her son Peter Renehan spoke of the strong foundation in family and culture laid by his mother.

When he and his four siblings were children, Mrs Stuart supported the family by working as the main caterer for TAA Airways, cooking for the route between Alice, Mt Isa, Cairns, Townsville and Brisbane. Able to bring home the leftovers, her job meant that there was always plenty of food on the table – great for the growing children.

Looking back now, Mr Renehan appreciates other aspects: one is that there were not many Aboriginal people in a role like that in those days.

“Mum taught a lot of people,” he told the opening crowd at the Space, “as she has done with you guys, in the day to day work environment, telling people, showing people the right way to do things, showing them how to engage properly and get it right from the start. 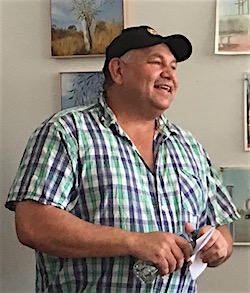 “You only get one chance with Mum! So you guys must be doing something all right after nine years’ worth of tours.”

Another thing the catering job helped with was feeding the old people who would knock at the door of the family home, looking for a place to camp: “Mum never ever turned anyone away … The house was always full.”

It wasn’t until later that he fully appreciated who these people were: “They were really outstanding citizens of Central Australia, really well known, well respected. They knew they could always come to us.

“We were really lucky, we didn’t realise we were getting all this contact with these really strong Aboriginal leaders who were really well respected and cultured, at our doorstep at the time. I see it now.”

They included the children’s uncle, the late Bob Stuart, who mostly lived with them. He and Mrs Stuart were two of the native title claimants who gave evidence to Justice Howard Olney in what became the first successful native title claim over an Australian township area.

The children were educated two-ways, going to school at Traeger Park Primary (now defunct). Most of the students at the time were Aboriginal and there was some attempt to have a bi-cultural curriculum. Mr Renehan came home one day and started speaking to his mother in Pitjantjatjara.

Mrs Stuart wasn’t going to have a bar of that: she went straight in to the headmaster “to give him what for”: “What are you teaching kids this other language for, here in Arrernte country?”

“That always stuck with me,” said Mr Renehan.

“Right through to now she is always pulling up, making sure people are doing things the right way.

“You people are recipients of that. It just shows over a long time that Mum’s always retained that system and beliefs she’s grown up with.

“She got it from the old people. She was brought up in that system, it was normal for us to see that, to go through that.”

In contrast, these days there are Aboriginal people “standing up and trying to take over and do things that would never have been done in the past”.

Mr Renehan said his mother is “the one lone wolf, (then correcting himself with a chuckle) the one lone wild dog who has stood up and maintained that system that she’s always known and grown up with.

“You guys have seen that, you get small glimpses of it. It’s how mum’s always been.”

He saw the respect for her “tough gig” evidenced on the walls, in artwork and poems.

“It’s deep and meaningful stuff. Obviously she’s said to you guys, go away, what you’ve learnt from here, go back home, put that down, express yourselves in the way you feel. Because everyone is always pretty emotional when they’ve finished the tours. They need that time to be able to reflect and think about it deeply in their own space, with their own families.

“What we love about artists is that they can express that in various different ways, on paper, in film, in poems and it actually means something.”

Doing things “properly and the right way, you get really good outcomes”.

In the middle of the back wall of the gallery was a large painting by Mrs Stuart’s late son, David Mpetyane; alongside it, another by a grandson, Ashley Renehan. Other children, grandchildren, great-grandchildren were present at the opening.

“This is the outcome of my life being who I am, here living on country,” said Mrs Stuart.

She also honoured her late brother: “He was one those looking after country, standing up. He doesn’t get the recognition due to him, but that’s all right, it’s who he was, he never changed. He was kind and gentle and made sure sites were his first priority.”


Mrs Stuart was asked if she would like to see plaques at the sites, as can be found at famous places in other parts of the world.


For the most part, no, was her firm answer. Growing up, when the town was a lot smaller “we knew our sites, there was no reason for us to put words to our sites … We had to respect the sites without having the story written in English, in that way we were protecting them.” 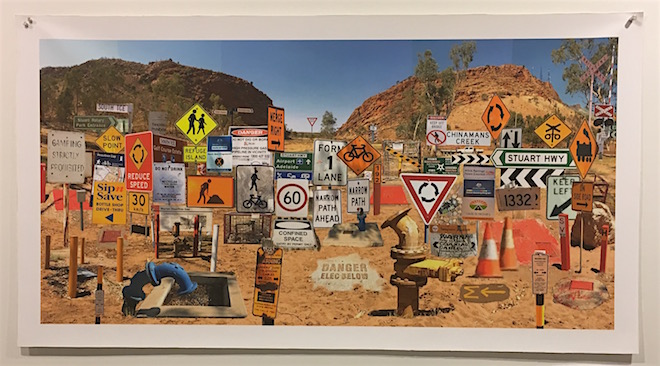 Above: Wrong way, Go back by Alison Hitman.

By way of example, she pointed in the direction of the small hill opposite the hospital, once known in English as Magistrate’s or Judge’s Hill, for the magistrates (first Scrubby Hall, later Dinny Barrett) who lived in the house built on top of it. For Arrernte people though it is Ntyarlkarle Tyaneme, an important site in the ntyarlke caterpillar story.

“For years we weren’t allowed to go anywhere near it,” said Mrs Stuart. “We used to walk from the Gap to school. My father would be in the lead, then all of the sudden he would dive off to the opposite side.

“We didn’t ask why are you doing this, we knew there was a reason for him not to go (near it). We were being taught respect without so many words. That doesn’t happen any more in this town.”

Her father, by the way, could read. He was one of the first pupils at Ida Standley’s school in Alice Springs, but he didn’t need reading and writing when it came to imparting cultural knowledge to his children.

Mr Renehan pointed out another problem with plaques or signs. The sites they identify “become an easy target” for deliberate attacks.

Mr Murphy pointed out one more: sometimes a plaque is all that is left of a site that has been bulldozed and erased. There is one such at Ilpeye Ilpeye, on the east side of town, another at the end of Bloomfield street.

Sometimes though signs can be useful. Mrs Stuart is very unhappy about people climbing Alhekulyele / Mount Gillen, an important site in the wild dog story. She has been asking for years for a sign to ask people not to climb.

One was erected recently – the photographic evidence was part of the exhibition (see below) – but it lasted for maybe a week. 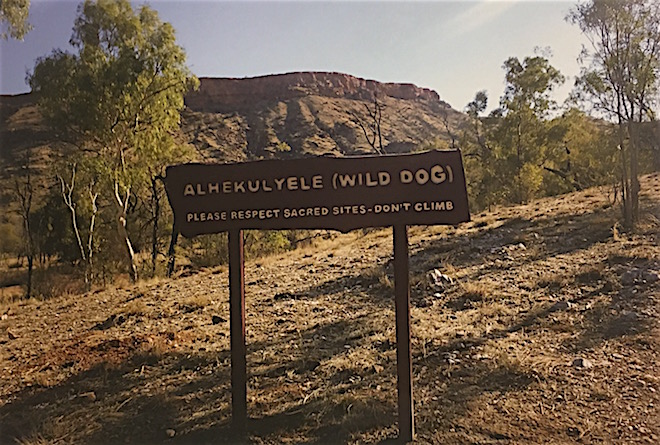 Note: Designer Elliat Rich was awarded this year’s Lofty on Saturday, at a celebration capping off a big year for Watch This Space. That story soon.