Home Issue 5 Words that everyone who lives here should know!
Issue 5Volume 24 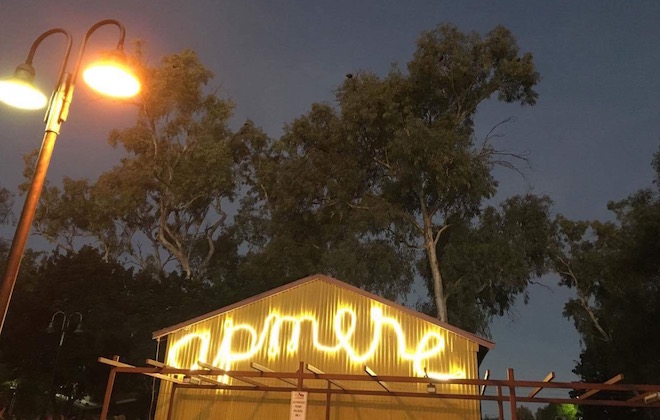 Werte (hello)! Nthakenhe irreme (What’s happening)? This is how we in The Alice, or Mparntwe as it is known to the Arrernte, should greet each other following last Friday’s opening of the program ‘Apmere (place) angkentye-kenhe (for language)’.

For those who do not yet know, Apmere angkentye-kenhe is the language program newly put together in collaboration with Arrernte people and experts out of concern, as defined by Arrernte atweye (custodians, owners, family), about their language declining. What is more, in their eyes language has the “potential for altering the way settlers and visitors experience a place,” and we are after all in Arrernte country. 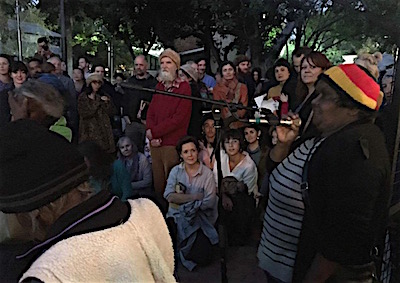 Most importantly, however, it has had strong Arrernte people associated with Akeyluerre Healing Centre at its core, dictating what the program should look like and how it should unfold. And this is one of the main aspects of the program that they have designed: that all Alice Springs based people should learn 50 essential Arrernte words in the three weeks that the program will be running. Thus, I have embedded some of these throughout this article in the hope that you will become more akaltye (knowledgeable, clever) of this akngerre (important, big, a lot) part of our resident culture. I am bolding the words from the list of 50, whilst adding others, inspired by the spirit of this exciting program.

Arriving at Apmere angkentye-kenhe hub, a bit apurrke (tired) as the arltele (daytime) was coming to an end, I was met by a familiar atmosphere. Though set up in a public space, the barrels of fire, camp chairs and pockets of friendly faces chatting away made the whole event feel like a backyard get together. The space is right in the centre of town, but the newly applied uterne (yellow, sun, summer) coat of paint on the old tin shed, and the fact that it was clad in the classic Aussie fairy-light apparel, also felt like a throwback to a romantic, though rustic Great Outback. Not to mention the intoxicating smell of kere (meat) coming from the BBQ!

It wasn’t long until there were even more rich scents around – white clouds from the smoking ceremony held by the women from Akeyluerre Healing Centre, welcoming and opening the space and program. Having known these arelhe (women) since I was akweke (small, little bit) and seeing them in private light out at camp, or in my own backyard, I found it almost odd to experience them with such a big crowd. Still, I felt stimulated to see them acknowledged in the public eye with the forum that they deserve, and I was, yet again, in awe of their commanding presence – as was the rest of the crowd. 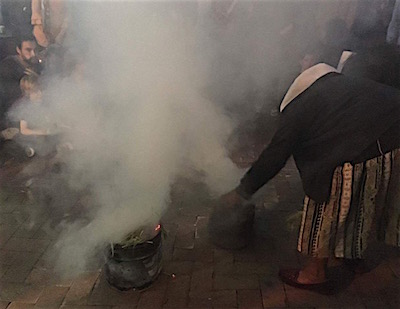 Amelia Turner (above right on the microphone), the daughter of Margaret Kemarre Turner OAM – who was one of the heavy weights in the program’s planning – stood in for her meye (mother). Barely visible through the smoke, she started with powerful words challenging anwerne (us) all to learn those 50 words. She made it very clear that by the end we should all be able to come up to her and talk in Arrernte as “We learnt English, you can learn Arrernte”. Nevertheless, she managed to make it light and had us all in stitches with her comedic timing and joking. For example, there was mention of another important custodian as that woman who walks around with a big painting under her arm always trying to sell. It felt like she was turning the ‘humbug’ stereotype around, or at least reframing it.

By the end I think we were all made to feel at home, and I saw people of all ages roaming through the tin shed base, exploring what was inside: an assembly of visual, audio, written and sculptural installations. I won’t tell you too much about the setup, as you should really go and check it out for yourself in these next few weeks. However, I can say that if you were around in the 1990s and were a fan of the ‘Unte Nthenhe-arenye’ (Where are you from?) song produced by CAMMA then you should definitely go and put on one of the trendy looking headsets on the back shelf! Also, the wooden 3D map (in the foreground, below right) made by Jack Batty pointing out significant sites in town with their Arrernte names pronounced from its speakers was very impressive… The whole gallery is really!

It is also amazing to note that this particular assembly was created in a just a few weeks. Beth Sometimes, board secretary of WTS, said that there were around 30 volunteers stepping in and giving it their all – she herself volunteering 16-hour days, she told me. The project is an act of artists coming together, she said. Even though so many individuals, services and schools have been interested, it has been the energy of artists that has made it happen. 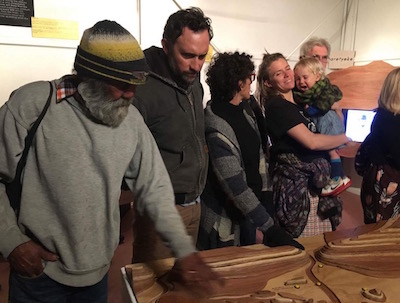 At the opening Indigenous locals addressed the widespread lack of understanding of the Arrernte that is spoken on our streets every day. I was, I hate to admit, surprised at how many Aboriginal people took part in the opening. Though interestingly, a friend who is relatively new to town commented on how few Arrernte locals were present …

I think this shows where the relationship between white and black Alice Springs was when I was younger. It seems to me that the instigation of a program like this is a good sign that things have changed, and I have hope that my friend’s expectations will one day be met as we come together further – sharing knowledge and culture. It takes years to generate true understanding and space for platforms that can genuinely present these. No matter how quickly the last push may look with Apmere angkentye-kenhe!

It must also be said that this is yet another fantastic chapter in the life of the admired Akeyluerre Healing Centre. And there are rumours that Akeyluerre and other bodies may receive funding for the program to continue past its three-week life span, and maybe even become an ongoing setup.

This would certainly be a mutual asset to Indigenous and non-Indigenous locals as well as the tourists who visit Alice Springs. One thing its presence makes clear is that outsiders are encouraged to go out there and learn. I think this is a clarification for many who may have felt like it may be seen as disrespectful, or inappropriate to even try.

The space is there now, all ready to go! Not only would this be a valuable learning centre, it would be a step in the right direction to offset the ugly and offensive courthouse next door. So, fingers crossed!

As for the words used in this article, well, I hope I too have assisted in opening the doorway for people to explore more than just these. Follow the link bellow and learn all 50!

As for the tin shed hub, nthenhe (where) can you find it?  It’s the old op shop, out the back of the Uniting Church, off Todd Mall. And nthakenhe-irreme (what’s happening)? Well, so much! For now though, Kele (finsh, ok, alright)!

Ronja Honey Moss grew up in Mparntwe close to the Arrernte families at Irrkerlantye / White Gate, the longtime friends of her father, the painter and author Rod Moss.