Is fracking in NT a done deal, asks Lock the Gate 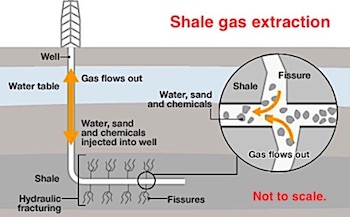 The Gunner Government appears to be side stepping the NT Fracking Inquiry with plans to facilitate onshore gas fracking in the Territory, says Naomi Hogan of the NT Lock the Gate Alliance.

She quotes from a statement on fracking in the NT Economic Development Framework released by Chief Minister Gunner yesterday: “In the near-term, government and industry need to work together to ensure key concerns held by the community are addressed and there is a clear, agreed and endorsed pathway to facilitate industry development.”

Ms Hogan (at left) says the Economic Framework “promotes trillions of cubic feet of onshore gas in the Territory, failing to mention the serious risks of fracking”.

Meanwhile Rod Campbell, Director of Research at the Australia Institute, last week told a public forum in Alice Springs that the government and the petroleum industry are vastly exaggerating the benefits to the public from further developing the onshore gas industry in the NT.

He says the NT is facing major gas policy decisions “at a time when the rest of Australia is dealing with the consequences of policies that have failed households, industrial consumers, taxpayers, shareholders and the environment”:

• As Australia becomes a major gas exporter, our pro-business Prime Minister is threatening to intervene in gas markets to secure local supply.

• Revenues from the main gas tax, the Petroleum Resource Rent Tax, are declining despite record production.

• Huge destruction of shareholder wealth. Santos shares, for example, are worth just 25% of their 2008 peak and less than half of their average price over the last decade.

• Environmental damage – rivers such as the Condamine River, Queensland, can now be set alight likely due to migratory emissions.

• Many farming communities are opposed to unconventional gas development.

“The NT has been relatively isolated from this chaos with its small market supplied by conventional sources and with exports projects supplied by offshore reserves,” says Mr Campbell.

“Industry advocates claim that fracking could bring independence from Canberra or that it is the Territory’s only hope. Such claims are misleading at best.

“All mining and petroleum royalties currently make up between 2% and 4% of the Territory’s total revenue. The vast bulk of funding comes from the Commonwealth.

“The Budget Papers forecast this will decline to $175 million through the forward estimates as some commodity prices decline.

“Even if unconventional gas could double mining and petroleum royalties, this would still be a far cry from financial ‘independence’ from the Commonwealth.

“Such a large increase is unlikely for several reasons. Most unconventional gas in the Territory is likely to be high-cost that would not compete in international or east coast markets without large government subsidy.

“Industry analysts such as Wood MacKenzie estimate NT wellhead costs at around AUD $7 per gigajoule compared with $3 for some producers on the east coast and internationally US$3 delivered at the Henry Hub in the USA,” says Mr Campbell in notes he gave to the Alice Springs News Online.

“Queensland has had unconventional gas development for many years and LNG exports since 2014. Despite this, latest budget papers show that gas royalties totalled just $97 million last year, $550 million less than originally anticipated for 2016-17.

“Royalty revenue does not come without costs. The NT Government spent $360m on gas processing-related expenses in the years from 2008-09 to 2013-14.

“If large unconventional gas projects go ahead in the Territory, some jobs will be created. However, gas projects are capital intensive, meaning they use a lot of machines and pipelines but employ few people.

“The entire oil and gas industry in Australia employs 19,200 Australian workers, or around a tenth of 1% of the Australian workforce, considerably less than the retail hardware store Bunning’s, which employs 33,000.

“Latest ABS statistics estimate that gas and oil industries employ 1,023 people in the NT. Arts and recreational services employed twice this many, 2,243 people at the last census.”

This table of employment figures was provided by Mr Campbell. 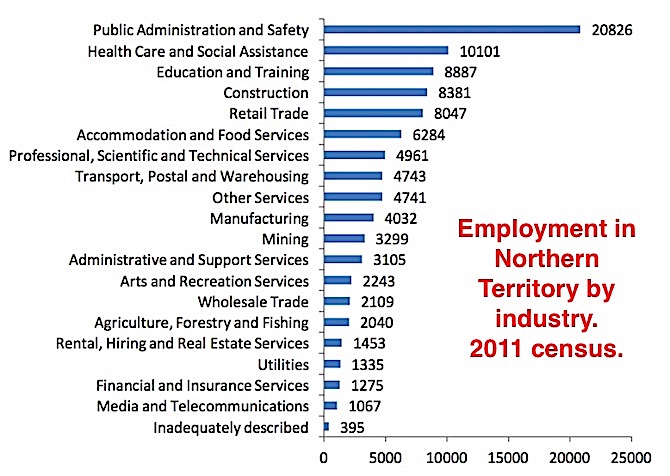