Getting the full theatrical package fit for national tour

Bringing a theatrical work to touring standard is a long haul. I saw the locally-devised The Package in its first showing at the Totem Theatre in 2014. I was enthralled by it then and equally when it showed recently at Brown’s Mart Theatre in Darwin as part of the NT Writers’ Festival. In the meantime, it had also been on stage at Araluen.

So I was surprised in Darwin to hear the players describe it as still “a work in development” and seek specific feedback from the audience, especially as it had developed quite a bit between my two experiences of it, with the most noticeable expansion being in additional animation.

The drawings are the work of Katelnd Griffin (animated by Conor Fox, who also directed the Araluen performance). Griffin has a beautiful drawing talent. It works the magic of a wonderful children’s book while, in animated form, moving the story on a dynamic journey through time and space, back to the childhood of the old woman’s daughter (or is it her own childhood?) and forwards through her daughter’s growing up (or again, is it her own?), falling in love, having children, watching them leave, growing old, right through to the encounter with death. 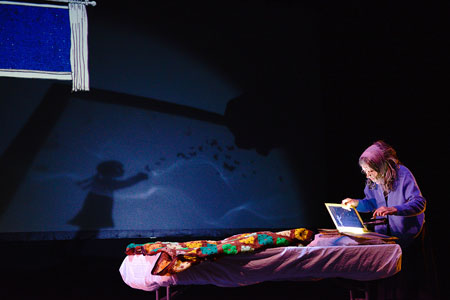 For some of the animated sequences a conventional projector is used, with the window on the backdrop screen enlarging as a portal into the old woman’s memories and reflections. For others a low-tech device is deployed – a torch in the hand of the old woman shining through the transparent pages of the ‘photo album’ she is looking through (see left). This imagery is simpler and more diffuse, in the way that some memories can be, in contrast to the clarity of others.

Griffin conceived the wordless play, first brought to life on stage by Unanyntji Scales, Kristy Schubert and Robbie Hoad, with the whole creative team contributing to direction. At the time of the Totem performance, life was imitating art and Griffin had just given birth herself to a daughter. Scales played the old woman then, but in subsequent performances Griffin has taken over.

It’s hard, she says, to fully develop a work on the basis of two performances, which is about all a small town can sustain in one season. That’s why repeat seasons in Alice and the outing in Darwin have been essential.

With each performance, the feedback from the audience – whether it’s expressed in transmission (that feeling of being able to hear a pin drop) or by applause, or explicitly in what people say afterwards – is invaluable for knowing whether you have hit your mark.

“You only stop developing a work, if you stop performing it,” says Schubert, who was also wearing the director’s hat in Darwin. 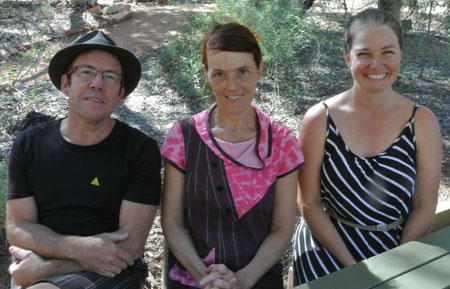 A specific next step, essential if the show is to tour, is to create an original score. Given that no word is spoken during The Package, the score has a more than usually important structuring role, helping establish shifts in mood, amplifying the emotions of a scene.

Till now the music has been sourced, except for a final track by Hoad. That has meant paying royalties to United Artists for each performance. Supported by crowd funding, Hoad (when he gets a breather from campaigning as the Greens candidate for Lingiari) will work with local musicians to collectively compose a new score.

Griffin set her sights on touring after attending an Australian Performing Arts Market. She realised that what was being produced theatrically in Alice Springs was as original and appealing as what she saw at the market, but without the same standard in production values. That’s where money, time and greater exposure to audiences come in and so, with Schubert and Hoad, she has methodically pursued this path ever since.