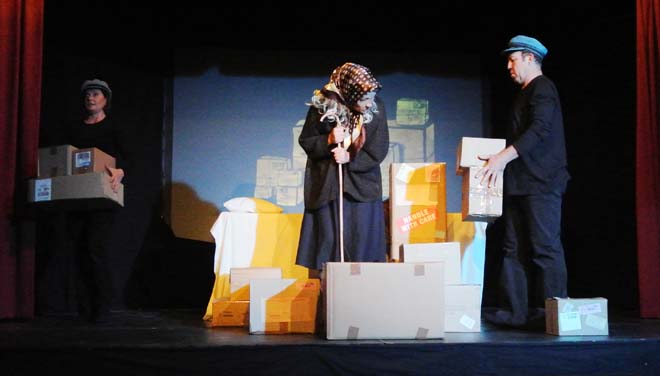 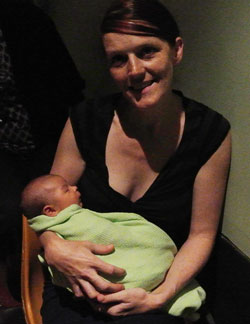 This is a theatre production devised by Katelnd Griffin and co-created with performers Unanyntji Scales, Robbie Hoad and Kristy Schubert. Griffin (at right, after the show with her one month old daughter) also directed.  It showed last night in two performances at the Totem Theatre and is bound to be a highlight of this year’s Alice Desert Festival.

The production combines puppetry and mask, physical performance and animation. There is no dialogue but it has an excellent musical soundtrack (sourced, except for the final track by Hoad); the stage is small, the set minimal; there are just three performers – how does it manage to so successfully convey something of the universal?

By knowing the power of simplicity, recognising how intense the core of things can be. The simple struggle of the old woman (Scales) to get into bed, to pull up the covers, feeling the comfort of their warmth, went straight to the heart of the matter in the opening minutes. And so it went for the rest of the show, homing in on the essential moments, gestures, emotions, at each life stage.

By recognising the power of representation, the way art can concentrate feeling. First the old woman’s mask, crafted by Griffin from some kind of rubbery material. At the start I felt almost a horror of this face; as the show progressed I was often moved by it; by the end, it was dear to me. This was in part due to Scales’ fine performance, but owed something also to the mask as representation, being able to receive the emotions of the audience in ways that an individual actor’s face could not. 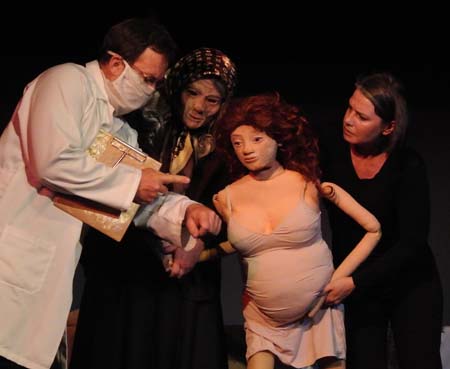 This goes too for the little girl and pregnant woman puppets, crafted by J9 Stanton and skilfully manipulated by Schubert and Hoad. I kept experiencing the rather thrilling illusion that they were alive. This was not because of extraordinary realism, but rather something just expressive enough, ambiguous enough in their representation to become a canvas for what I/we were feeling.

The animation, cued in by the sequence with the little girl puppet, brought it to poignant conclusion, using the aesthetic of a children’s storybook – the night sky, falling stars, the call of the infinite, the little girl retreating back through time and space, out of reach. An image of loss – whether of a child, through death perhaps or simply through their growing up, or of one’s own childhood.

The bird, crafted by Sarah Mason and Andrew Cook, worked differently. With its scrawny neck, bulging eyes, tattered plumage, it looked as much dead as alive, a harbinger from another realm, knock, knock, knocking on earth’s door. It was drawing on archetypal power.

Not quite puppets but almost, larger than life genitalia also made an appearance. They were hilarious and shocking and absolutely had their place as an artfully simple way of conveying the commanding power of sexual desire.

Some parts of the theatrical experience rely to a degree on surprise and, as I hope the production gets further outings in Alice Springs, I won’t describe its beautifully timed unfolding in further detail. It is a feat for all involved to have handled the very large themes of this material so poetically, so movingly without falling into sentimentality and cliché. Griffin has plans to take The Package further as a touring show. All power to her and her creative team and a big pat on the back to Red Hot Arts Central Australia’s Incubator Project, which has supported development of the show.