Home Issue 4 'TROUBLE mirrors our ugly parts: we can learn from this.'
Issue 4Issue 5Volume 23

'TROUBLE mirrors our ugly parts: we can learn from this.'

Above: The launch gets underway on the courthouse lawns, Ken Lechleitner speaking, the now empty former police station in the background. Photo by Rainer Chlanda.

When a mob stabbed and beat Kumunjayi Pollard to death in Charles Creek, when Ed Hargrave was fatally stabbed in a street in Gillen, when Kwementyaye Ryder closed his eyes forever after being beaten and kicked by five men on Schwarz Crescent, and when former football star Liam Jurrah attacked women, two “dark and dangerous fluids” were running through our town: one was blood and the other was grog.

And for the dream we all hope to become a reality, of creating a beautiful and peaceful place in which to live, we have to realise “that the roots of the trouble are in our community, in the conditions under which we live, by which we organize ourselves.

“It’s not this amorphous monster out there, which we can cut away, lock away, it’s our community and therein lies hope. If it’s our place, our people we can do something about this.” 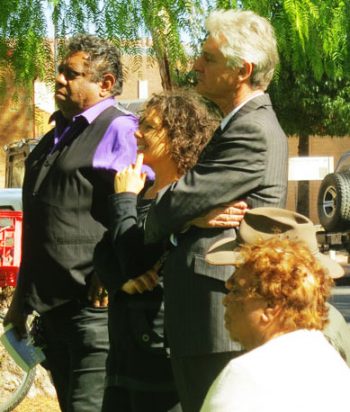 Alice Springs News Online journalist Kieran Finnane was speaking at the launch of her book, TROUBLE: on trial in Central Australia, on Friday, appropriately on the lawns opposite the courthouse where she did most of her research, under the blue Central Australian sky.

The book is holding up a mirror to the town, said Ken Lechleitner, a prominent Aboriginal man from the region, of Arrernte and Anmatyerre descent. In that mirror we can see “our ugly parts and our system of governance and system of everything that we live under – it’s a nasty picture, but it’s also something we can learn from”.

His opening acknowledgement was to both “the native title-holders of Alice Springs, past, present and future”, as well as “the visitors who came and settled this country, past, present and future”: “When we actually start doing that we start liberating ourselves as people going forward. Because we do have a dual heritage, we do have dual responsibility towards each other in regards to shaping the future.”

He referred to one of the “compelling” stories recounted in the book – “about a mother who sees her son’s eyes open for the first time when she gives birth, to then keep a watchful eye while the young person is growing up to become a young man himself. And then on one particular night, through some kind of drunken rage, this group of men rocks up and closes the young man’s eyes without the mother knowing”.

He spoke of the “predicament” for Aboriginal people of having “to learn how to handle” alcohol, “this so-called nectar from God that we name ‘ngkwarle parma wama’”: “So when you say that someone’s an alcoholic you’re actually saying that person is a nectar connoisseur.”

The book tells a sad story, said Mr Lechleitner, but “it’s sad stories that we’ve got to learn from.” 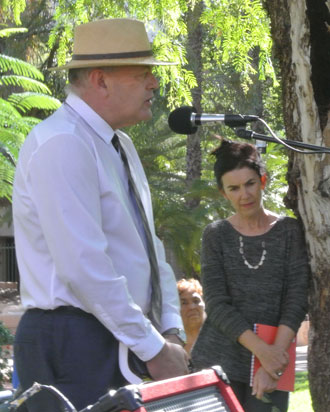 It was Russell Goldflam, well-known senior criminal defence lawyer in Alice Springs, who spoke about the “dark and dangerous fluids” of grog and blood that run through the book. He also evoked, as the book does, one of the first stories ever told about Mparntwe, “a cruel, vicious, protracted dog fight”.

He pointed out that the memory places for that story are all around the town, known in English by prosaic names, such as Billygoat Hill, or as such and such carpark: “Beneath those places are stories and under those stories there’s law.”

In her book Kieran Finnane has made places of memory for “troubles which beset our place in this day and age”, said Mr Goldflam.

“And she digs around under the places of memory … to investigate the law that governs the people who’ve made those stories. Not just the law that I work in, and not just the ancient law under those memory places of Mparntwe people, but also the unwritten codes of law that mysteriously govern the ways we relate to each other, whether it’s to our family or our community or indeed to our whole society.”

He spoke of the writer’s sharp eye and mind brought to bear in meticulous descriptions of what people say, their gestures, expressions, and silences, as well as from time to time “a flash of a phrase that sets you back on your haunches and can reduce you to tears, a moment of insight that is truly remarkable, because this is not only a work of journalism.” 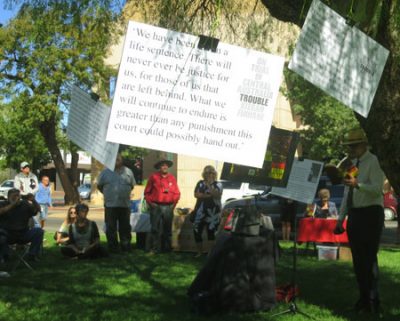 He spoke of the children in the wings of the book, and also of the mothers who are at its centre – “the mothers who’ve lost their children, either to an early death, or to a lengthy period of imprisonment” – to whom the writer responds with the compassion of a mother.

At right: Extracts from the book hanging from the branches of a tree.
Photo by Pip McManus.

In concluding Mr Goldflam read a passage* from TROUBLE that summed up for him its key lessons, including that “the context of most crime, even the most serious, is ordinary, which is not to say untroubling”, as Kieran Finnane writes:

“In Central Australia’s ordinary there are things we have in common – such as a culture of excessively heavy drinking – and things that are peculiar to us as individuals, families, and broader social and cultural groupings.

“This is obvious yet seems to need stating in the face of the blunt instruments of law and order responses, including mandatory sentencing. Each case, as these stories reveal, is particular – each victim, each perpetrator, each set of circumstances, each violent act. Up close, as women and men die or are injured at the hands of another, categories and generalities disappear. Victims and perpetrators know this starkly. Lawyers and judges know it by long exposure. The general public and the politicians who seek their favour should take heed and stop trying to tie the hands of the courts.”

The passage also talks of “an evolving relationship between many Aboriginal people in Central Australia and the Australian settler law” as well as the co-existing and evolving governance of Aboriginal people’s everyday lives by their own law and mores: “No amount of social and cultural bludgeoning from without is going to eliminate that.”

It argues for support of the leadership shown by Aboriginal organisations and individuals in recognising the devastating impact of violence on their communities, and for taking up again “the complex matter of consideration of Aboriginal law” – “a cultural setting far broader than, and in the twenty-first century necessarily excluding, the tribal corporal punishment which those words conjure”:

“The suppression by fiat of any consideration of Aboriginal law is highly artificial given the realities of people’s lives outside and thus the realities of what the courts have to deal with. There is surely everything to gain by working with people as they are and are becoming, rather than expecting them to leave a significant part of themselves at the door and forcing judges to look at them with blinkers on.”

Said Mr Goldflam: “Kieran is right, that’s a message which our lawmakers, our policy makers, our politicians, should take on board and act on if we are ever going to get ourselves out of this trouble.” 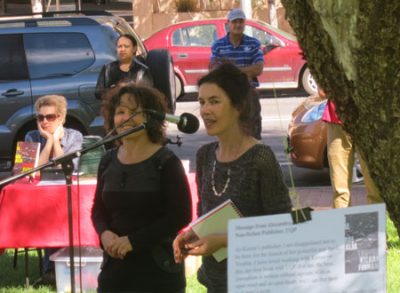 A message from Alexandra Payne, Non-fiction Publisher for the University of Queensland Press, read out by MC Craig San Roque, explained why a leading national publishing house has taken on this book:

“For me, the best journalism is written without agenda, with an open mind and an open heart, and I see that here in Kieran’s work,” wrote Ms Payne.

“In telling this story, these stories, Kieran captures the complexities and ambiguities of life in Central Australia through the lens of the courtroom, and does so as a long-term Alice resident, not a disconnected journalist from the eastern states. It has been an honour to watch TROUBLE take form and UQP is proud to be part of this significant contribution to Australian journalism.”

Above right: Ruth Apelt and Kieran Finnane; Bronwyn Druce and the Red Kangaroo Books pop-up in the background. Photo by Pip McManus.

In her response to the speakers, Ms Finnane acknowledged the suffering of the people she writes about: “the victims who have lost their lives”,  “the perpetrators who have to live with the knowledge of what they have done”, their families and friends.

She also acknowledged the people who work every day at the courthouse, for their many acts of decency and efforts towards understanding in an extraordinarily intense workplace.

The event closed with Ruth Apelt (below, photo by Rainer Chlanda) singing a heartfelt localised adaptation of Gillian Welch’s ‘Hard Times’. Welch wrote the song about poor Southern farmers in the United States around the time of the Depression, but, said Ms Apelt, its “larger theme about the relentless progress of modernisation, the sidelining of people and the meaninglessness of lives is so much a part of what is going on here”.

The refrain of this evocative song goes: “We’re going to make it to the end of the road, singing hard times aren’t going to rule my mind no more.” It was a fitting note on which to end the launch of TROUBLE.

*The full text of this passage can be found here.

TROUBLE: on trial in Central Australia, by Kieran Finnane, published by UQP, is available in Alice Springs at Red Kangaroo Books on Todd Mall and nationally in all good bookshops. Our international readers will be glad to know that the book is now also available on ebook vendor sites.