Seeing his name in the credits drives Josh 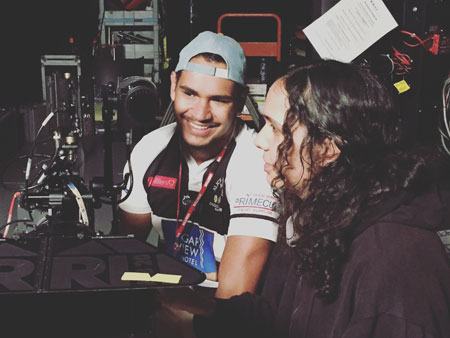 Josh Tranter is a young man in a hurry.

Aged just 19 he’s had a string of jobs, mostly back-to-back, after finishing Year 12, “the first one in my family to do so,” he beams.

He belongs to a big local Aboriginal family. His father, David, is a sound recordist in demand by documentary film makers around the country. Film and TV production is now the game Josh has set his mind on.

He did his Years 10 to 12 in the St Patrick’s College in Ballarat: “It was pretty weird. Around here you see your mob all the time. In Ballarat you hardly see anyone of colour.”

After completing high school he came back to Alice as his parents moved to Melbourne. “Never let a chance go by” became his motto.

Media had been a special subject for him at school, and he had worked on a documentary called Desert Dingo with his father, a film about Aboriginal songlines.

He grabbed an opportunity to work on a pilot for Nanna’s Place in which well-known Central Australian writer Trisha Morton-Thomas was involved.

When Josh’s first choice, acting, didn’t work out, he was offered the job of boom swinger and he grabbed it with gusto.

Boom swinging not only requires considerable strength, holding a microphone, usually on a long bar, over the heads of the actors, just out of shot.

The boom swinger also needs to memorise the dialogue so as to swivel the mike just before different actors begin to say their lines.

In between film engagements Josh did not let the grass grow under his feet, taking advantage of Alice’s plentiful job opportunities: casual night porter at Aboriginal Hostels, cleaner, kitchen hand, “whoever rang me”.

He worked at Standley Chasm for two to three months, then an office job in the Department of Health reception: “I didn’t like it. I thought I should be out there doing stuff,” he says.

He then worked as a sports and recreation officer at Ali Curung where his grandmother lives.

Back to Alice, he was helping out a family friend with gyprocking job. Now he is an assistant teacher at Sadadeen Primary.

Josh emailed immediately, embellished his experience in media by just a tad. He got the gig.

By coincidence one of the course participants was Alice-born Shiloh Jarrett, Ms Morton-Thomas’s daughter, who Josh says is doing a Bachelor of Arts in Sydney, majoring in cinematography.

True to form Josh made the most the course, expressed lots of ideas, to the extent that one participant thought Josh had the makings of a director.

During the making of a five minute clip at AFTRS he says he “gave input” about the way shots were set up, use of the dolly for traveling shoots, set building, how things look in the frame – with little more prior film making experience than watching Inglourious Basterds in high school.

The only thing he was struggling with was script writing.

It can be safely assumed he’ll get a handle on that as well.

“I liked seeing my name in the credits,” says Josh.

PHOTO: Josh and Shiloh at AFTRS.