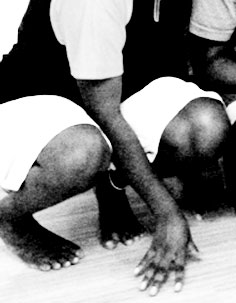 Asked last week about what Alice’s latest Alcohol Management Plan might be doing to prevent alcohol getting into the hand of young people, he said it is a matter of simply enforcing the rules: no sales to people under 18.


When crime is being committed, his concern is that if the perpetrators are youths, even if they are apprehended they are being let go.

“Police go to all these hard efforts, they pick up kids who are committing the crime, then they are released straight away.”

The solution is “making sure we are following the appropriate processes of sentencing and the justice system”.

He expressed “broader levels of concern” around breaches of bail.

He also suggested that a lot of youth property crime is organized, even using the word “syndicate”: “when you take those individuals [the leaders] out of the syndicate the crime goes down”.

He made no mention of glaring welfare issues in the lives of young people coming before the courts, as highlighted by our recent coverage of spates of offending by groups of teenage girls.


The last of the group, whom I have called Nadia, was sentenced last Thursday.

Among her charges were eight breaches of bail, so Mr Giles is right, there is an issue there, but in the case of Nadia, at just 13 years old, the problem surely lay with the adults into whose care she was placed, among them her mother, a heavy drinker.

Nadia does not have a good relationship with her mother and doesn’t feel safe with her.

Her other charges included multiple counts of property damage, aggravated unlawful entry, stealing, and the most serious, a count of aggravated robbery, where the victim was a 60-year-old woman in the Yeperenye Centre carpark last August 3, Picnic Day. This offence took place in broad daylight; all of the others were late at night; one unlawful entry took place at 3.30am. All of the offending was done in the company of other youth, including girls.

As previously reported, Nadia’s situation had been brought to the attention of the Department of Children and Families on numerous occasions, but there has been no effective action taken.

In her young life she has been known to abuse alcohol and sniff inhalants. At Don Dale Youth Detention Centre, where she spent time on remand for the offending that saw her come before the Supreme Court, she attempted self-harm.

On Thursday Justice Judith Kelly sentenced Nadia to a total of seven months’ detention. She had already served 83 days. The rest was fully suspended and no conviction recorded, even for her part in the aggravated robbery – “a very serious offence where normally you would need to impose a conviction”.

However Justice Kelly was concerned to avoid the “serious consequences” of a conviction on the record of such a young person, even if she doubted that that had much meaning for Nadia.

“Protection of the community” was a major consideration in sentencing, but in Justice Kelly’s view that was best served by Nadia being given a chance to rehabilitate – to go to school, live a stable normal life, not be running around at night, getting into trouble, drinking and sniffing.

Nadia left court in the care of her elderly grandmother, with whom she will live. She will also be under the supervision of a probation and parole officer for the next 12 months.

Time will tell whether the support she gets in these conditions will be enough to turn things around for her.