Experience, strong performance and diversity of representation counted not in last night’s secret ballot for Deputy Mayor, a position that turns over each year at this time. Since the sudden resignation of Kylie Bonanni in July last year, the role has been held by Cr Steve Brown. 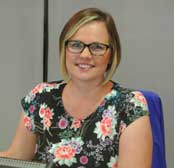 Cr de Brenni said the nomination was “humbling”, acknowledging that he was the “new boy on the block”, but he assured his fellows of his “capacity” to support the Mayor and elected members where necessary.

Cr Kudrenko appealed to councillors to consider her four years of experience and the effort put into her role. While she always participates in debate in the chamber, once it is concluded, she has demonstrated a “respectful and professional” representation of the “collective view of council”. She said she would be “extremely proud” to take on the job.

Deputy Mayor elect Jamie de Brenni (left) is a middle-aged white man of conservative politics and a motor sport enthusiast. Sounds a lot like Mayor Damien Ryan. Apart from the able contribution of his builder’s knowledge of the construction industry and issues, the community has yet to see what other capacities he will bring to his role.

Cr Jade Kudrenko is a young white woman, the mother of young children, a foster parent, a Green.

Through her employment with the Central Land Council she is in close touch with Aboriginal people and issues, a commitment to which she takes onto the council committees that liaise with Tangentyere Council, including the new Women’s Safety Group, and the native title holder body, Lhere Artepe. She is a strong performer in the chamber, probably the most articulate and probing.

Her close scrutiny of all issues includes an eye kept on the bottom line: what will be the impact of actions on the budget.

Had she been honoured with the role of Deputy Mayor, it would have reflected well on council as a ‘broad church’, embracing a wider cross-section of the community.