Bush bakeries and the dough 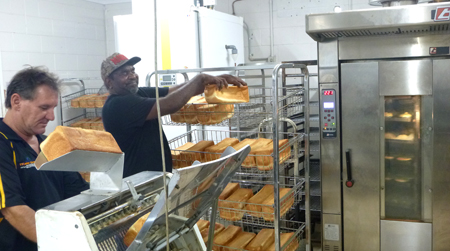 The Alice Springs company Remote Food Solutions, whose sister company is Wicked Kneads, received nearly a million dollars from the Federal Government for the installation of bakery shops in the remote communities of Hermannsburg, Papunya and Yuendumu.

Remote Food Solutions is also the main supplier to the three stores, which are owned by the communities.

Wicked Kneads, which owner Darren Clark says has a proud record of employing Aboriginal people in customer service roles, is in the process of relocating its Alice Springs shop to the Alice Plaza Shopping Centre.

The public funds, $940,000, which the Alice Springs News Online understands has already been paid to Remote Food Solutions, came from the Department of the Prime Minister and Cabinet.

Mr Clark declined to provide financial details about the deal on the grounds that his agreement with the department prohibits him from disclosing contract information.

This also relates to the volume of the supply by his firm to the three government-funded shops.

The bakery in Hermannsburg had been under way 10 months when we reported about it in March 2014. Mr Clark says that business became part of the Remote Food Solutions program in about June this year.

According to a statement from the department, the grant includes money for “training 36 participants (12 from each community Ntaria, Yuendumu and Papunya) in Cert I in Food Processing and Cert II in Retail Baking Assistance.

“The training program is being developed and will be delivered from February 2016,” says the department.

“This is part of a larger joint Australian Government and NTG partnership which is investing $7.35 million into building 21 bakeries across remote communities in the Northern Territory.

“The Australian Government has not sought to control the way the bakery operates nor does it intend to subsidise its ongoing operation and as such, it has to be a commercially-viable business.”

Mr Clark says under the contract, with runs until the end of 2016, his and his company’s involvement includes:–

• Providing the equipment which then becomes the property of the community-owned shops. 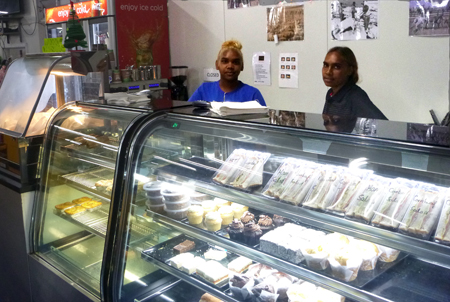 • Making sure it works.

• Finding candidates for the training. They must not be in existing employment nor involved in another government program. The actual training is not Mr Clark’s responsibility nor is it covered by the $940,000 grant, but will be carried out by Batchelor Institute under a separate funding arrangement. Mr Clark says he, too, will take part in providing the training.

• Supplying, for an undisclosed profit additional to the grant, frozen dough for bread and rolls which Mr Clark obtains from an Australian company under an exclusive agreement, as well as sweets bakery products.

The participants are not manufacturing the dough. It is transported to the communities frozen, they thaw it, “form” it into loaves or rolls, “proof” it (the final rise dough undergoes) and bake it.

Mr Clark says many attempts to carry out the complete bread making process in bush communities have failed.

Frozen dough can be transported and stored more efficiently, and so can contribute to remote area food security on occasions when weather or other events cut off transport routes.

We have put the following questions to the department:-

What are the measures to ensure that the 36 participants obtain the certificates in Food Processing and Retail Baking Assistance?

Are these certificates of value in the jobs market (outside of their communities) or would they need to progress to a Certificate III?

Will the recipient of the funding be obliged to return funds, in full or in part, if the program’s objectives are not achieved?

The department provided the following replies:

“A standard funding agreement is in place for the bakeries at the three community stores at Ntaria, Papunya and Yuendumu.
“There are requirements in the contract for the training certificates to be completed. These will be enforced as is the case for all funding agreements the department has in place.”