Your role in beating a global scourge 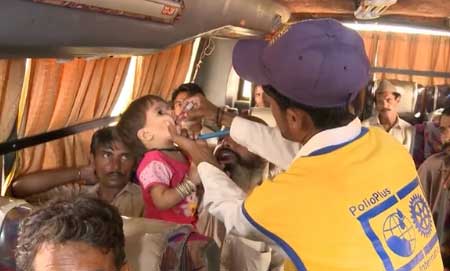 Buying a steak sandwich from a Rotary Club in Alice Springs may put you in the loop of a charity which is spanning the world, stamping out of one its great scourges.The $6 you pay can buy 10 polio vaccines.

Multiply this transaction by hundreds of millions over three decades and five continents and 1.2 million Rotary members, and you get a feeling of what big things growing from little ones is all about. After a campaign spearheaded by Rotary, the killer disease is all but extinguished.

It doesn’t get much bigger than this: The foundation of Microsoft’s Bill and Melinda Gates is tripling money raised by the service club, up to $35m a year for three years. That means the couple will be contributing up to $210m.

Tony Abbott’s government has pledged $100m over five years and the World Health Organisation, too, is providing massive funding.

It all started in 1978 with Rotary’s international president at the time, Queenslander Clem Renouf. The organisation was looking for a global service project. 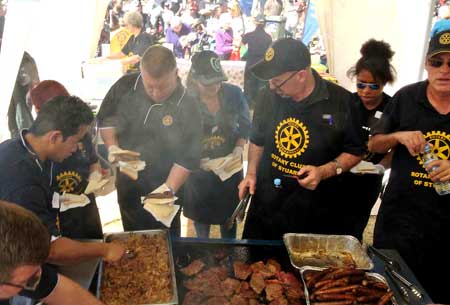 There were 1000 new polio cases every day. “Stop Polio” was the answer.

Last year, more than 30 years later, there were 122 new cases in Nigeria between January and June. In the same period this year there were just three.

Dr. Jonas Salk at the University of Pittsburgh had developed the vaccine in 1952. Now – finally – it was time for it to get to the children who needed it. Rotary spearheaded the drive, says District governor for SA and the southern NT, John Campbell.

Mr Campbell (pictured) was in Alice Springs last week to visit the three clubs here, with a combined membership of about 90. He is seeking $1500 donations from all clubs in Rotary District 9500 which takes in South Australia and the southern half of the Territory.

Only in Nigeria, Afghanistan and Pakistan is the disease still regarded as endemic. Some volunteers there providing the vaccines are risking their lives.

There is now less than one case per day being diagnosed anywhere in the world.

Rotary expects to consign polio to history by 2018.