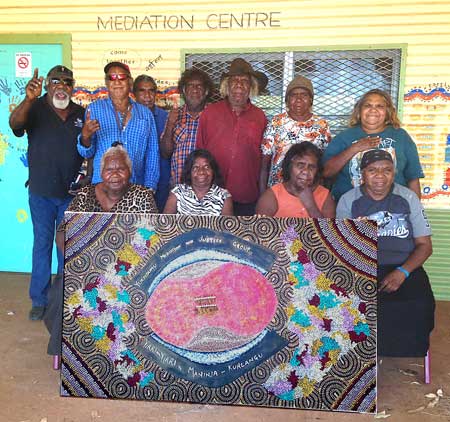 The Centre’s principal industry, getting money from the government, is heading for another milestone: Go and get funded for getting on with one-another, that is the objective.

And the subtext is: If the public purse doesn’t cough up we’ll be costing it a great deal more.

The push by the Central Desert Regional Council for $4.3m over 10 years according to a media release, or $2.25m according to spokesman John Gaynor, to fund  the Yuendumu Mediation & Justice Program (YMJP) is textbook stuff.

Ironically, the council’s demand coincides with the construction of a $7.6m police station in Yuendumu by the NT Government.

The Federal funding for YMJP so far has been in response to some three years of strife in the community, culminating in the exodus of several families to Adelaide where the SA Government and some charities over an extended period accepted responsibility for housing and other services.

The fighting spilled over to Alice Springs when opposing parties, in the glare of national media, staged highly vocal running battles opposite the courthouse, where Yuendumu’s favourite son, star footballer Liam Jurrah, was answering assault charges.

The council now not only wants the program to continue, it wants to expand it to Willowra – another community beset by long-running feuds. No doubt there will be more clamouring for similar cash infusions, for a full-time mediator, an assistant, an office and, presumably, a car.

Compared to the cost of the NT Government’s Community Justice Centre, which is available to all Territorians, the funding sought by the council, on a per capita basis, is 132 times greater, on Mr Gaynor’s cost estimate, or 250 times greater on the figure stated in the media handout. (As soon as it became apparent that the Alice Springs News Online was challenging his ‘good news’ story Mr Gaynor cut further contact, so the confusion over the two estimates could not be clarified.)

An academic was engaged by the shire, Professor Anne Daly from Canberra University, to produce a cost-benefit report on the YMJP so far.

Additional government expenditures caused by the troubles were assessed, and extrapolated over 10 years. This amounted to $18.5m, including $4.1m for courts, $3.1m for Healthier Children and $2m for police, as well as a $2.7m loss in community productivity.

Council CEO Cathryn Hutton says: “There can be no better evidence to convince Government of the value of its investment.  This is a remarkable result.  The independent analysis estimates a benefit cost ratio of 4.3.

“The savings to be made in the areas of health, education, law, order, justice and housing compared to Government’s investment rank amongst the highest in the world for community development programs. It’s stunning,” says Ms Hutton.

The council claims the Canberra University report shows the YM&JP – should it be continued – “will  provide a net saving to Government of in excess of $14m over the next 10 years” and “for every $1 invested … there will be a saving of approximately $4.30″.

It is clear that Prof Daly is not saying anything of the kind.

We asked her – and the council – what is the evidence that the troubles would not have been sorted out without the YM&JC – as they have been over millennia.

Prof Daly says this cannot be determined with any certainty: “It’s hard to set up the counter-factual.”

All that is known is that prior to the setting up of the YMJP “various attempts to sort out trouble [had] not been successful”.

There is no proof that locals working behind the scenes to stop the troubles would not have acted without a funded service being in place, nor is it clear what the impact of that service was.

A Yuendumu local, speaking on the condition of not being named, says there was considerable activity behind the scenes, and there is a common view in Yuendumu that the council is taking more than its fair share of credit for the resolution of the conflict.

The source says there would be considerable opposition to reconciliation processes being institutionalised under the council umbrella.

During the troubles the YM&JP was run by a council employee, Madhu Panthee, who has non-Australian ancestry, has certainly no family relationship with Yuendumu family groups, and could operate from a vantage point of impartiality.

Would his proposed successor, Robert Robertson, being a local, not be handicapped by family obligations?

Would families or clans other than Mr Robertson’s seek to get a similar position funded with public money?

During the troubles, how often was a significant intervention by Mr Panthee sought by the community and the police?

Prof Daly says for her and her team this was a “limited exercise”. They conducted research “to the best of our abilities” with police, health, child protection and other government instrumentalities.

She did not visit Yuendumu and neither did she conduct research with its community. It was not part of her brief.

She has not met Mr Robertson but said she was aware that being able, or prepared to, meaningfully intervene into disputes of other family groups is a “big issue”.

The council did not respond to any of those questions, and neither did it answer these:-

The Community Justice Centre has a staff of three in Darwin, covering all of the Northern Territory, plus freelance, trained mediators in several other locations.

These freelancers are assigned (and paid) as required.

• Why should that system not be extended to Yuendumu and other communities [at a far lesser cost]?

• According to a media statement from the council, mediation “has played a powerful role in breaking cycles of disadvantage, distress and suffering caused by unmanaged community conflict”: How powerful? What management? What actions?

• The statement says: “It is a positive and compelling example of the drive, vision and commitment of Aboriginal people in Central Australia to take control and responsibility for matters in their community and their effectiveness and skill in doing so.” Is that under dispute?

• What is the reason for asking the taxpayers to foot the bill for  the YMJC?

• How many family groups are there in Yuendumu? (The News understands there are about a dozen.)

• Would families / clans other than Mr Robertson’s seek to get a similar position funded with public money?

• What is the best guess of how many other communities, clans or families would be seeking funding for similar organisations throughout the Territory?

• What would be the cost?

• Would such funding (beyond what the Community Justice Centre provides already for all NT residents) not undermine the notion of independence and self-reliance, and reinforce the notion of the government having responsibility for all matters Aboriginal? Prof Daly says while independence and self-reliance are “important goals” allowance needs to be made for communities where “the rule of law and a safe environment” are less intact than in the wider Australian community.

• Would the staff of the Yuendumu police station be reduced and if so, by how many people?

Although the council says Mr Robertson is available for interviews, he did not return our call.

During discussion of this report Prof Daly made the following comments: “While no one can be sure that expenditure on the mediation committee will definitely generate these savings to government, you can’t be sure that they won’t either.

“The savings generated by a peaceful community, not just at Yuendemu but in other communities in the NT, from reduced violence might be even greater. If the Yuendemu mediation committee has been so successful, perhaps more money needs to be spent on similar committees elsewhere.

“Law and order are generally provided by tax funded institutions, the police and courts so why shouldn’t these services be publically funded in Aboriginal communities? It might take a different form than in other communities.


“I think you need to acknowledge the difference between actual expenditure, e.g. on police, and notional expenditure and benefits. You quote a figure for the time spent by the  mediators but this is not actual dollars, it is notional dollars representing an opportunity cost of the other use of these people’s time.”