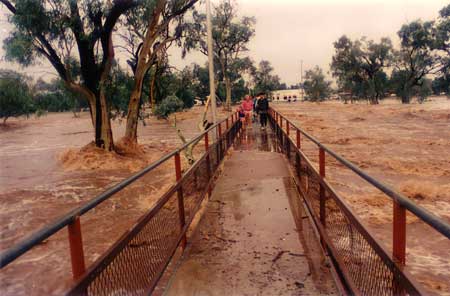 We received a quote on April 24 from Elders for adding flood cover to the insurance of our family’s home in the rural area of Alice Springs.

The annual premium quoted by Elders, in addition to the standard coverage, was $13,882.

We switched to the Territory Insurance Office which includes flood cover in their standard coverage – at much the same premium as Elders minus the horrendous flood add-on.

Chief Minister Adam Giles remains hell-bent on selling TIO, which has assets worth $400m, and the deal is rumoured to be announced today.

He would be doing so in the face of massive opposition.

He did not have the courage to front a public meeting in Darwin to discuss the move, claiming lamely that the issue had been hijacked by Labor.

The Chamber of Commerce NT is hardly a front for Labor.

“Established in 1957 the Chamber is the largest employer association in the Northern Territory. [It is] an independent, not-for-profit and non-government body … an effective platform for lobbying on the issues that impact upon business,” says its website.

The Chamber is opposed to the sale of TIO.

Mr Giles tells us he needs the money for “economy-growing infrastructure” – which projects, exactly, in The Centre?

He also tells us that TIO would have to lift its premiums in any case, so we’re not going to be worse off.

He has that tragically wrong – as he has a string of other things.

His government owns TIO. It can subsidise the insurer, and through that, his constituents, to any extent Parliament decides.

Mr Giles’s government gets four and a half times more money from Canberra than the national average. That’s 450% more.

The NT is getting this money for “disabilities”: principally remoteness, small population, harsh climate, high prices. Those grants are untied. They are contributed by the national taxpayer to make populating the inland feasible.

Mr Giles doesn’t understand that, or doesn’t want to.

So while his government is doing nothing to protect Alice Springs from catastrophic flooding, becoming more likely with climate change, he is exposing the town that is supporting his party to debilitating losses.