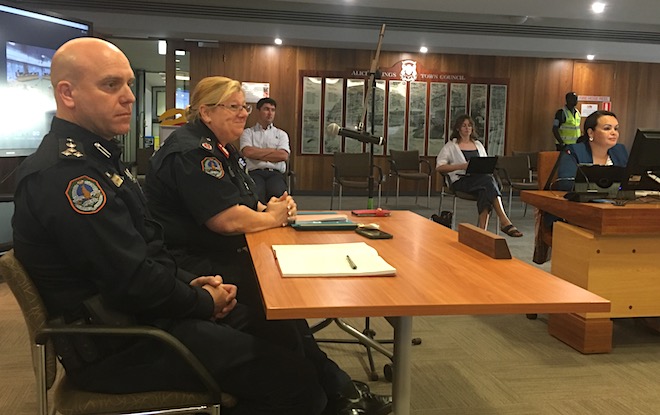 At the end of a long deputation by senior police to the Town Council on a recent uptick in crime and antisocial behaviour, Councillor Marli Banks put a useful question: What’s missing? she asked. How can council help?

Newly appointed Commander for the Southern Region, Craig Laidler ventured a practical suggestion: help provide a safe place for young people to stay when they are found out on the streets at night.

This was not an original suggestion: it’s been clamoured for by the youth sector for years, but it remains infuriatingly absent.

Cdr Laidler said such a place would be one where young people have “ownership” while they also provided with “a level of care” that doesn’t require police involvement.

“We would support this in any way we possibly could,” he said, as part of a long-term aim to shift “the structure for youths” who are up all night and sleep for most of the day.

Council has allocated a budget of $470,558 to the youth space. A Youth Hub proposal – which sounded as though it might fit Cdr Laidler’s bill – seems to have faded into the Covid-19 clouded background, in favour of a pilot program with “a fundamental purpose on empowering young people to improve”, according to a recent council media release.

It’s not entirely off the agenda, according to the same release, and both Cdr Laidler and Assistant Commissioner Narelle Beer referred to their ongoing regular discussions with council CEO Robert Jennings.

Cr Glenn Auricht had spoken of comments received from “angry town residents” about the “inability of police to deal with underage children”.

They seem to be able to commit crime with impunity; police can’t restrain them; they are used a lot by older young adults for criminal purposes: “The community needs defence from young criminals,” he said.

Commissioner Beer, who has responsibility for the entire NT outside of metropolitan Darwin, calmly set out the protocols: the law says that a child under 10 can’t form a conscious decision to do wrong.

“So if a child under 10 commits an offence, there is no offence. However, police do have an obligation to ensure that child is not at risk.”

Between the ages of 10 and 14 the law says that the child may know the difference between right and wrong and then it is incumbent on police to establish mens rea, guilty mind, meaning they understand what they’ve done.

Regardless of age, however, police will arrest offenders.

With under 10s it is not a matter of pursuing them through the justice system; rather, they will be taken home and referrals made in relation to the “at risk” child.

In the next age bracket, when a child has committed an offence, police often look at a lower level of intervention, such as a diversion program, “before we get to the criminal point”.

“So, it’s a myth to think we can’t and don’t arrest the people committing offences.”

Police have “an absolute obligation” to convey children at risk to a safe place, to a responsible adult, and to make the appropriate referrals.

She said there are “challenges”  in understanding why a child does not want to be at home when there are lots of family and the child is going from one to another.

She spoke of possible opportunities “to provide skills and strategies” for parents managing children, ending on a personal note: “I went through a teenage daughter, and that was really traumatic for me.”

Specifically on the recent uptick in offending, Cdr Laidler said it was related to an influx of people to town, drawn by events such as Red Centre Nats, football finals, and “a significant court case” – the Zachary Rolfe trial. (Our picture below shows Yuendumu community members and supporters gathered on the courthouse lawns.) 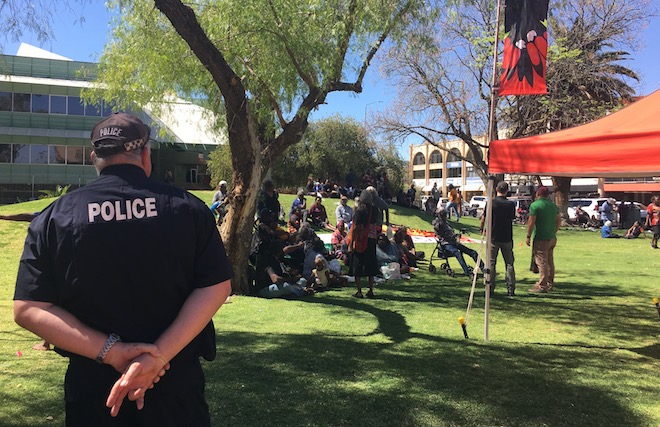 He said police are concerned to be dealing with recidivists but also some young people whom they’ve never had contact with before. The youths are both locals and from out of town.

Cr Jimmy Cocking asked about the “integrated approach” to youth offending that had previously been in place.

Comm Beer said it had been going well until Covid-19 hit. Police are stretched, she said, by the 12 hour rosters they are currently working and the cap on leave (no more than 10% of the force allowed to be on leave at any time) – resourcing measures introduced to cope with expanded duties, including border control.

Help is on its way, in the form of a $20m allocation for border duties and 131 additional sworn and unsworn staff.

Later in October Alice Springs will also see 12 new “accelerated recruits”. These are police officers from other jurisdictions, “a great win”, said Comm Beer, giving the force “some old heads on old shoulders”.

Police are already working with Territory Families and will be reinvigorating the integrated – multi-agency – approach for dealing with youth offenders.

Cr Matt Paterson asked about numbers of police on the streets at night.

Comm Beer said there were 22 officers on patrol last night (a Tuesday) in Alice Springs. The numbers were similar pre-Covid but previously five patrol groups worked over-lapping eight-hour shifts; now there are four patrols on 12 hour shifts, with no overlap.

Cdr Laidler said 22 Aboriginal liaison officers are being recruited. Four will be allocated to Alice Springs and will start their training on 5 October. (The rest will be sent to Tennant Creek and remote areas.)

In Alice, the focus will be on building relationships with the town camps, where police have identified “a gap” – “we don’t have ongoing engagement”.

They want recruits who are respected and have those relationships with town camp residents so that, if issues arise, with young people, their families, or between camps, early interventions can be made.

On the bigger picture, Comm Beer spoke of work on a 10 year remote policing strategy. A significant change relates to recruitment: on joining the force, all officers will be assigned to regional centres, then to remote communities, before the possibility of a post in Darwin.

She said only way to get promoted in future would be to have done both regional and remote service. The expectation of police will be that they become part of the community they serve, engaging with the locals from the get-go.

To a question from Cr Jacinta Price about remote policing, she spoke of the need to “embrace localised cultural knowledge” – “policing culture and community culture”

This plan will go hand in had with an infrastructure plan, providing fit for purpose facilities to replace the temporary structures provided under the Intervention in 2007 (archive photo above, at Arlparra in the Utopia Homelands).

She is also working with interstate partners, such as the Queensland police, hoping to station NT officers at Camooweal to intervene in the secondary supply of alcohol through that area – mentioning the example of a sly grog bottle of rum selling for $800 (!) in a remote community.