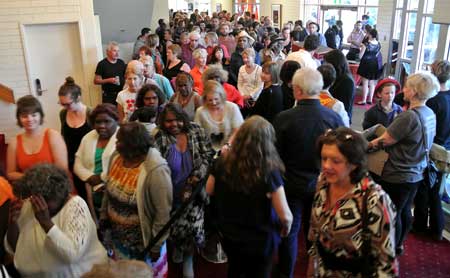 Above is the bottom line of Alice Springs tourism – declining since 2005, nosediving in 2011, flat as a pancake since then and – if the suspension of Tiger flights in 2011 is any indication – likely to be facing a further drop in the wake of Tiger’s pulling out yet again on July 22. The graph is from Tourism NT.

“Tourism Minister Matt Conlan said Tourism Research Australia’s latest National Visitor Survey showed the local industry was on the road to recovery with domestic visitation to the NT up 9.4 per cent.”

Which “local industry” might this media handout be referring to?

Is it the “local” tourism industry in Alice Springs where Mr Conlan lives, where he was elected, and to where Tourism NT’s headquarters were transferred at a cost that is in inverse proportion to its accomplishments? Has he had a look around lately?

The handout has much to say about the “accommodation squeeze remaining a challenge in Darwin”.

Mr Conlan’s home town does rate a mention: “Alice Springs also recorded a good result with total visitors growing by 6.2 per cent to 229,000 for the year ending June 2014.

“Of course the withdrawal of TigerAir on 22 July will have some impact on the next results to come out however, we are confident the tide has turned.”

Of course “visitors” – as opposed to holiday makers – include FiFo workers, bureaucrats and shoe salesmen whose presence isn’t a result of efforts by the $40m a year Tourism NT.

Could it be that he is oblivious to the opportunities which one of his portfolios could create for the others, if the rest of the country, and the world at large – enthralled by Aboriginal art and culture and ready to pay for it – were only given a coherent message?

Locals may also have liked to ask Mr Conlan why government promotion, over which he presides, continues to be pouring money into the Ayers Rock Resort, an issue commented upon recently by Mayor Damien Ryan and CLP vice-president Daniel Davis.

At 10am the morning after the Desert Mob launch Mr Conlan was on top of Anzac Hill – so he was in town – having given media 58 minutes’ notice. At 10.42 we were fed his spiel via email – information that would have been useful ahead of his appearance so that reporters could prepare their questions.

Alice Springs News Online still has no response to a request we made for an interview.