Making money while the sun shines

The electrical “cake” of Alice Springs is $57.5m a year, calculated at the 25c the householder pays for a kilowatt hour.

How many of these 230,000,000 kilowatt hours annually are from renewable resources, mostly from the sun, how many should be, or could be?

In a nutshell, these were the questions asked by the Alice Solar City 2008-2013 project that came to an end with the release of a hansdome book this month.

It looks with pride at major accomplishments: managing public funding of $21.5m, inspecting, advising and monitoring hundreds of households on matters of power use, coordinating subsidies for photo-voltaic (PV) and hot water installations, keeping track of the data collected.

Brian Elmer and then Sam Latz headed up a team that was efficient, friendly and inspirational, carrying out tasks the organisation had charged them with.

Any criticism should not be targeted at them, but at the governments and the Town Council which formulated the objectives of the initiative, as well as that part of our population that remains indifferent to environmental issues.

And so the report leaves many questions open.

In fact less than half of 1% comes from household PV units, most of them heavily subsidised by the taxpayer at their installation phase.

Half the town’s households still don’t have solar hot water units, notwithstanding a $2000 subsidy then available for the $6000 units.

Is the reason for this limited interest that a significant proportion of the town’s population is transient? As a landlord, do you get less rent when you let out a flat without a solar hot water unit?

Which is the more cost-effective way –  PV or solar water heating – to save power drawn from non-renewable resources?

The answer contained in the report is fascinating: PV initiatives within Alice Solar City amounted to $2.4m and saved 723,000 kWh per year. $638,000 was spent on solar water heating, saving more than a million kWh/yr.

That means the good old solar water heat on your roof is more cost-effective than PV – by a factor of about five.

While the report is precise about the capital costs, power generated and tonnes of CO2 saved, it gives little or no details about the running costs of Alice Solar City’s iconic projects, including the airport’s, Crown Plaza’s (now the Doubletree Hilton) and Araluen’s.

This makes it difficult to judge the likely commercial significance of renewable power in Alice Springs. 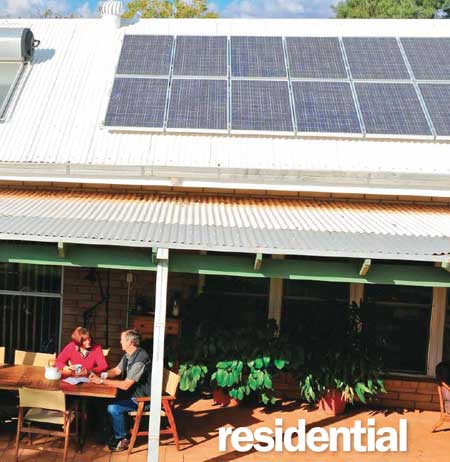 Uterne, on the South Stuart Highway adjacent the Road Transport Hall of Fame, another of the “iconic” projects, provides just 1% of the town’s demand.

But Uterne is also one of the project’s big success stories because it has the nation’s first Power Purchase Agreement (PPA): a 20-year deal with Power Water Corporation (PWC) for the supply of power at set prices.

Based on that, a bank agreed to provide a loan to set up Uterne. That was coupled with a 50% Federal grant, $3.3m, for the establishment costs of $6.6m. The airport and the Hilton also got 50%.

It is tempting to extrapolate: If Uterne were to supply 100% of the town’s demand the plant would have cost $660m.

Any investor would look at a return of 10% a year, so start off the annual running cost at $66m.

What else? Sunlight is free but what about mechanical failures, vandalism, hail damage … the details are not given.

Now compare Uterne’s establishment cost (our rough estimate) with that of the new Owen Springs power station, $57m, which will replace the Ron Goodin Power Station in Alice Springs, over the next 10 years.

The Owen Springs Power Station is one of the highest-efficiency plants for its size in the country, says PWC, and yet it cost just one-eleventh of an equivalent solar power generator such as Uterne.

While the NT Government, through PWC, has clearly acted wisely in giving Uterne a long-term deal, my rough figures show up the failure of doing something similar for potential small producers.

Producing solar power could become a cottage industry, instead of growing tomatoes or chillies in your back yard.

But that’s going to work only if the PWC makes available long-term deals for the small producer as well.

They are not doing it. At the moment PV owners can sell their power into the grid for the same price as they a buying it, but there is no long-term agreement.

There are spectacular economies happening right now – for example, PV panels have dropped 70% in price roughly during the live of Alice Solar City.

The cost of $10 per watt installed at the beginning of the Alice Solar City campaign is now $3. Five years ago solar panels were the major cost. No longer – and installers are more efficient.

To take a dim view of this, Alice Solar City was investing heavily in products whose price was in freefall. On the other hand, initiatives such as Alice Solar City around the world would have lowered prices as the growing demand stimulated research and production.

Regrettably, incentives for small producers are not being exploited by PWC. This is notwithstanding that the company is obliged to accumulate carbon credits.

While Alice Solar City was a fully functioning organisation, trusted by the community and fully capable of setting up a network of small producers, PWC – although a cash funder of Alice Solar City and key supporter – failed to act decisively on that issue.

The same clearly applies to the Cost Reflective Tariffs (CRT) trial in which 370 participants (including the writer’s family) participated.

CRT is simply giving consumers a monetary incentive to shift their power use away from the current peak times: you pay less between 6pm and 9am, so use your washing machine, water heater, pool pump and so on during that time. Simple.

It’s in use throughout Australia and a key factor in the strategy of power generation infrastructure: the lower the peak the fewer generators are needed that sit idle for most of the time.

Again, with Alice Solar City in full swing for five years, PWC had the opportunity of getting some useful answers to influence consumers’ behaviour. PWC didn’t. CRT has been discontinued. There is no indication of it being re-introduced.

The Alice Springs News Online enquired about the initiative in June this year. This is the reply we got: “The CRT was a funded trial, to finish before June 2013.

“Power and Water have chosen to not extend, modify and/or expand the trial at this stage. PWC learned that customer response to these pricing signals was quite variable with some customers being unable to change behaviour.

“Any shifts that did occur were quite modest. Further trials in this area would require a thorough review of the design and methodology, incorporating current knowledge and best practice at the time.”

When history decides whether Alice Solar City has been a success, it will clearly look at its ongoing legacy: to what extent were the taxpayer’s millions working as seed money? To what degree are the big consumers – and the little ones – prepared to cough up for the entire, unsubsidised, costs of solar power?

The airport, which got a $1.1m subsidy for its $2.2m plant, is apparently looking at expanding beyond the current 28% yield of its demand although its 28 concentrating photovoltaic tracking arrays are complicated and high-maintenance.

The Hilton and Araluen (the latter’s PV array financed entirely by the NT Government) have run out of roof space and panels on the ground are not a good idea.

But all in all, renewable energy from the sun is now firmly on the agenda of Alice Springs. There have been bold initiatives. CDU reckons the project has generated $100m in turn-over for the town.

And any failings can happily be put down to the learning curve we had to have.

PHOTOS (from the report): Part of the Araluen array. Domestic PVs: No long-term price yet. Sam Latz. The airport solar powerstation.

By ERWIN CHLANDA A long-time businessman says the council is inadvertently providing the missiles used to break windows in the Mall. Darren Burton says he will...
Read more
Issue 33

By GEOFF MIERS August has to be one of the busiest months on the gardening calendar with a diverse range of gardening activities needing to...
Read more