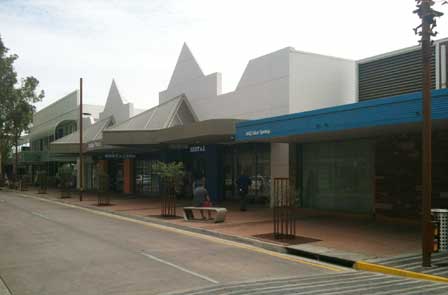 There are still surprises to be discovered in the unfolding redesign of Todd Mall. I’d been away for almost a month and walking back from the courthouse to the riverside carpark the first to catch my eye was the new seating.

The provision of lots of seating has been one of the strongest signals to people in the mall that it is being promoted to them as a place to linger and enjoy. There are the ranks of simple brick benches, with their coloured tile highlights, lining Parsons Street and congregating at the intersection of the street with the mall. Then there are the stainless steel Caterpillar benches (with their controversial resilience to skateboarding) in the middle of the northern section of the mall. Both sets were part of the original design work led by Susan Dugdale, with the emphasis on the mall as a gathering place arising out of the consultation and planning led by Steve Thorne of Design Urban.

Now, picking out the northern stretch almost like random musical notes, there are new benches designed by Elliat Rich and fabricated by CAT Projects. 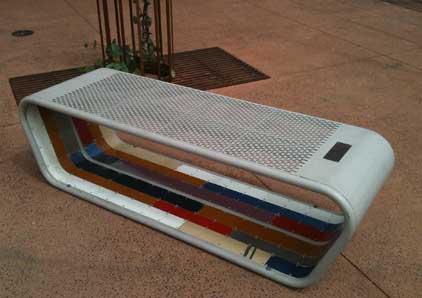 You soon realise that there’s nothing random in the unexpectedly odd angles of the placement of these benches. A discreet little plaque on each points, with an arrow and succinct information, to a place in the distant and not-so-distant landscape where events have happened in the past contributing to the shaping of the present day town. Examples: at three kilometres to the north-west, on 11 March 1871, “Thereyurre / ‘The Alice Spring’ chosen as a site for the repeater station”; at 7.3 kms to the south-west, on 1 February 1878, “Second trig point established on Alhekulyele / Mt Gillen.”

So, while waiting for your friend to come back from the bank or out of the dress shop or to meet you for a coffee and with the prodding of just a few words, your mind is set on a journey out into the majestic landscape that surrounds the town, to different points in place and time of the encounters between cultures. Curiosity is stimulated, acts of imagination provoked. What you do next with this is up to you …

The angles of placement are striking. In contrast the aesthetic is subtle. The benches, the outer surface a pale grey like the bark of a rivergum and industrially smooth, sit easily into their surrounds yet they are distinct, especially in the way they are shaped as a single form and with the pleasing use of strips of coloured recycled sheet metal, lining their base. 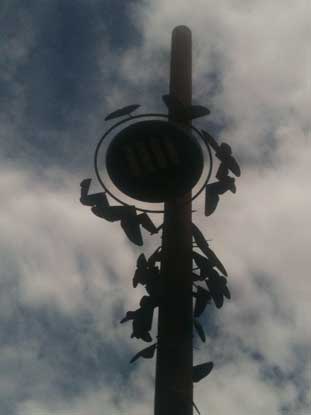 As I take a snap with my phone something in the upper right hand corner attracts my attention. I look up. There are two light poles at either side of the road as Parsons Street curves round into the northern mall. Families of moths, wrought in rusted steel, flutter to their ‘flame’. It’s as if they have been released from the nearby ‘art’ moth shade structures, a lovely playful connection made by the artist Pip McManus, responsible for both.

I’m looking back to the shade structures when I notice the third surprise. This one is not so pleasant. For me the pinnacle of achievement in the redesign has been the decluttering that has restored integrity to the presence of the ancient tree in Parsons Street and opened up the line of sight towards the river. A circular depression in the paving in front of the tree, called the Rainwater Reflection Pan (designed to fill only when it rains), made a gesture of reverence to the tree and its significance particularly for Arrernte people.

The design worked with the elegant simplicity of geometry and symmetry. Attention to detail in the construction process saw the use, in the centre of the pan, of sandstone bricks from the original construction of the Civic Centre as a way to subtly acknowledge the institution of the Town Council and its role as present day guardian of the public space.

So what can have possessed our civic authorities to cut into these sandstone bricks and furthermore to do it asymmetrically, in order to place a plaque marking the “official opening” on July 20 last of the redevelopment of the mall? The plaque, typical of its kind, records the names of four men: Matt Conlan MLA Minister for Central Australia, Mayor Damien Ryan, Council’s CEO Rex Mooney and Director of Technical Services Greg Buxton. For all its bronze prestige, it’s little better than someone carving into a tree or graffiti-ing a wall, “XY was here, 20/7/13”. 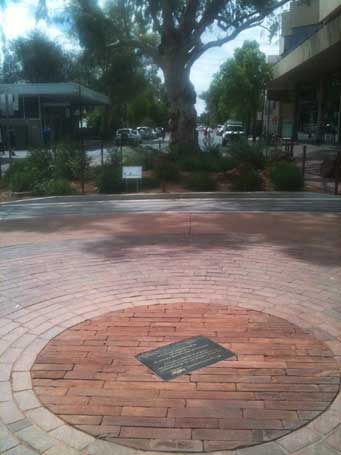 Had whoever stopped to think, and perhaps to consult, they should have realised that this plaque could have been honorably and far more appropriately placed elsewhere, perhaps on a nearby wall or on the base of one of the nearby benches, for instance.  As it is the Rainwater Reflection Pan stands tarnished.

I go into the mall since the redesign with a particular interest, above all wanting to see how it’s working, how people are responding to its various features and to the whole feeling of the place. When I talk to people about it, they often haven’t noticed certain particulars or aren’t aware of their significance or connections. A step that I hope will be taken soon, and with careful thought as to its realisation, is the provision of interpretative material.

Artist Pip McManus supplied the photos below, showing how the moth lights come into their own at night.

The photo at the bottom shows a view from above of the adjacent moth shade structures which emphasises the charm of the lacy shadows they cast. Architect Susan Dugdale designed the moth shade structures which are repeated in sets along Parsons Street, at the junction of the street and the mall, and again in the northern stretch. McManus has intervened in two sets of the structures, one in Parsons Street, the other shown here. The moth motif takes its cue from the Arrernte totemic caterpillars, the Yeperenye, Ntyarlke and Utnerrengatye. McManus’ work also acknowledges – in spelling out the names for the moths from both systems – the Arrernte and Western scientific knowledge systems that stand alongside one another in Alice Springs, making meaning and understanding in the very special landscape in which we live. 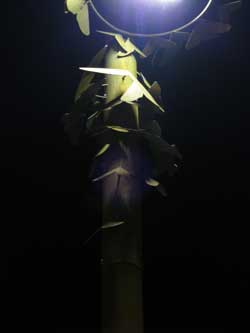 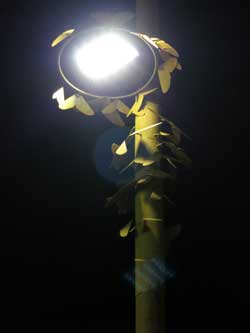 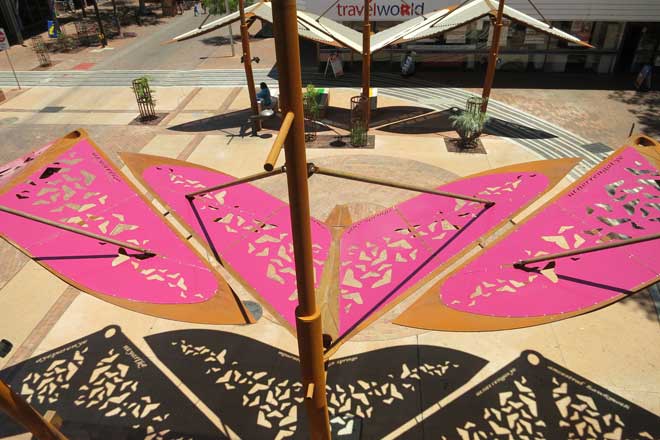