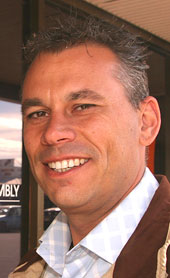 The summer of crime is hitting businesses and residents already, and it’s only the first week of October, says Member for Braitling Adam Giles (pictured).
But police say Operation Thresher, a special initiative now in its second week and targeting anti-social behaviour and property crime over the school holidays, involves 32 police officers “dedicated to high profile and covert patrols of known hot spots in the town”.
Says Mr Giles: “Last night there were three break-ins of Alice Springs businesses, and during the day two homes were also ransacked. “Knowing one family who were the victims of a break in this week, I share their frustration and outrage about a decline in public order and personal responsibility that has swept Alice Springs due to the ineffective policies of the Henderson Labor Government.
“Relying on the police to mop up after the crimes have happened is not an acceptable response.
“Cleaning up and patching up seem to be the norm, yet what is needed is attacking the problems at the source and that starts with dealing strongly with the kids that are creating this chaos.
“Do parents not know where their kids are late at night – or do they just not care?”
Police say Operation Thresher “involves members from the Property Crime Reduction Unit, General Duties, Intelligence Unit, Dog Operations Unit, Mounted Unit and forensics crews.
“We are also liaising with other Government and non-Government agencies that engage with youth to ensure young people are monitored and provided with support services if required.”