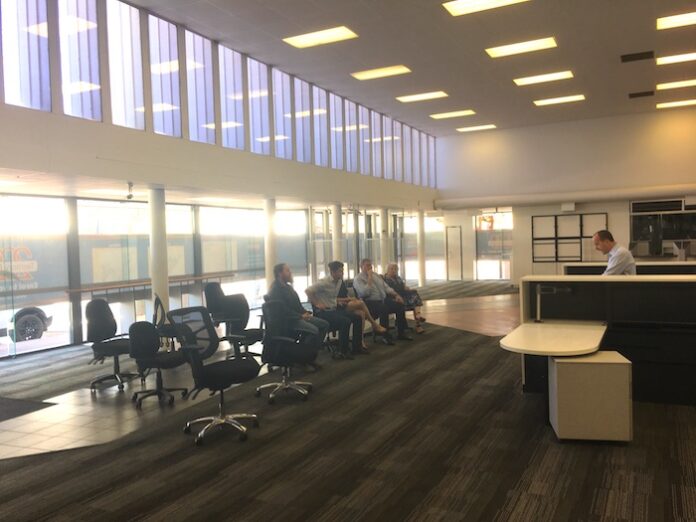 This was not a good occasion to discuss returning to the Town Council, said former Mayor Damien Ryan this morning, when asked by the Alice Springs News whether he would.

He was here to congratulate Robyn Lambley, he said, on retaining her seat of Araluen which he was trying to take off her in the 2020 Territory Election on August 22.

“Here” was the temporary Electoral Commission office in the Mall where the results in Central Australia were being declared.

Mrs Lambley was not there, and neither were most of the other people invited by the commission with the exception of Mr Ryan’s wife, Joanne, their daughter Lisa-Marie, her husband Josh Burgoyne (at right) who unseated ex-front bencher Dale Wakefield in Braitling, and Tony Willis, the bottom scorer in Namatjira.

This crowd of five was told that more than half the electors cast early votes and participation in the bush was dismally low, for example, just 56% in Gwoja.

In Central Australia the results in Araluen, Braitling, Barkly and Namatjira were decided on preferences. Only Chansey Paech, in Gwoja, had an outright victory (more than half of the votes cast).

Just for interest, below are the primary votes, before preferences were allocated. However, these changed the result only in Araluen.

The Town Council has announced that along with Damien Ryan, Catherine Satour, Marli Banks and Matt Paterson “have made contact to be re-instated to Council and this has been approved by the CEO”.