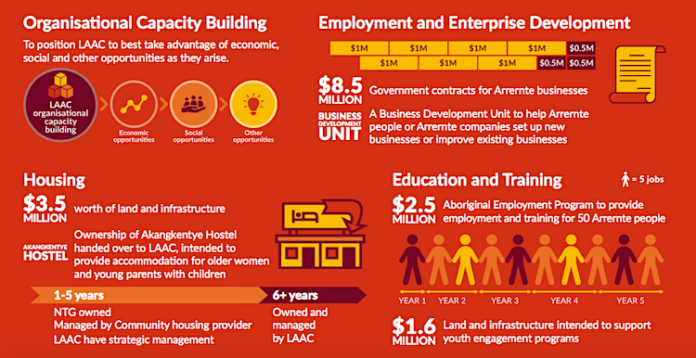 A land deal in Alice Springs between the NT Government and Lhere Artepe, currently under discussion, is likely to define further the price of native title in the region. 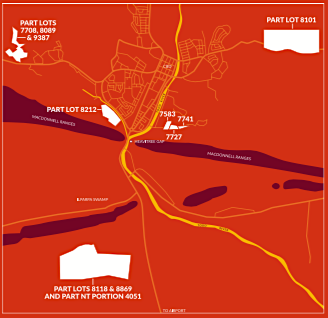 On the table are a large piece of public land on the north-eastern edge of town, near Whitegate (see it at the top right-hand corner of the map).

Added some town real estate, plus government initiatives and services, and the total price tag is $20m over five years.

What the NT Government would gain is merely the lifting of native title on land it owns around town (other white areas on the map).

Merely is a relative term: Ashurst, which promotes itself as a “progressive global law firm,” comments on a group of Noongar in WA who last year filed a compensation claim for $290 billion.

That’s a billion with a “b” not a million with an “m” – almost a quarter of Australia’s gross domestic product and more than Western Australia’s annual gross state product.

The proposals in Alice Springs last Wednesday progressed with an information meeting, open only to native title holders. No statement about any decision has been issued.

The situation is not unlike the deal made by Labor Chief Minister Clare Martin for Stirling Heights at the western edge of the town, which in effect valued native title at half the freehold price, a formula that at the time was said not to be a precedent.

However it turned out to be so when Stephens Road (near the casino) was developed, and real estate prices in the town skyrocketed.

According to the invitation to this latest “information and consultation meeting” it was meant for “Antulye, Irlpme and Mparntwe affected native title holders and members of Lhere Artepe Aboriginal Corporation”.

However, it is claimed there was a repeat of the apparent exclusion of the Irlpme moiety.

Its president, Fabian Conway, says he was not told about the meeting although he is listed as a director of Lhere Artepe, under his correct address, and the staff knows his mobile phone number.

Mr Conway told the Alice Springs News he would have been most interested in the financial aspects, especially for the large area near the airport.

This time a Lhere Artepe spokesman said Mr Conway was invited to the meeting and information papers were sent to him at his PO Box.

“He was also visited at his hostel on the Eastside by members of his estate group and advised of the meeting.

“The meeting was widely known about in the Arrernte community and was very well attended.”

The largest cost item in the negotiations, aiming at achieving an Indigenous Land Use Agreement (ILUA), is $8.5m for “government contracts for Arrernte businesses” and a Business Development Unit “to help Arrernte people or Arrernte companies set up new businesses or improve existing” ones.

Who decides the definition of an Arrernte person or business?

The brochure (from which the illustrations here were taken) circulated to members says Lhere Artepe “are working with the NT Government to ensure that all Arrernte business and persons taking advantage of this package are recognised by [Lhere Artepe] as Arrernte”.

Spending on housing, land and infrastructure will be $3.5m, developments to be government owned and managed for the first five years after which they will be transferred to Lhere Artepe.

The ownership of Akangkentye Hostel will be handed over to LAAC, “intended to provide accommodation for older women and young parents with children”.

It is a “secure, centrally located site” in South Terrace with 19 one and two bedroom units.

The facility includes a commercial size kitchen and dining area as well as a caretaker office and accommodation, valued at $3.5m.

The NT Government will provide Lhere Artepe with the opportunity of formulating Arrernte place names (whether approved as the Arrernte name only, or as the Arrernte component of a dual name) for 10 geographic and topographic features. 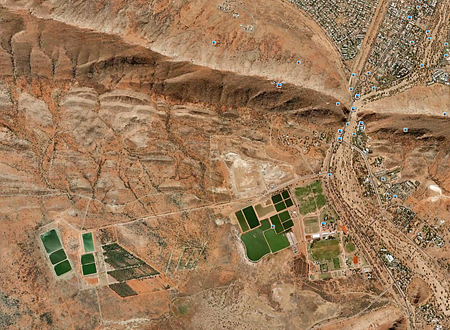 Arrernte “storytelling, way finding, history” will be displayed in and around the Heavitree Gap pathway which is to be upgraded at a cost of “at least $4m to provide safety to the many Arrernte people who walk through The Gap regularly”.

Lhere Artepe says there are further meetings planned for later in September.

[ED – The Alice Springs News has raised on many occasions, going back to 1995, that the NT Government owns, via its Power and Water Corporation, about two square kilometres of land that is not encumbered by native title (pictured), in the centre of the municipality of Alice Springs. That land is currently used for sewerage disposal, a function that could be performed by recycling, preventing the current stench, saving billions of litres of water and taking up a tiny fraction of that land with the rest available for a variety of uses.]