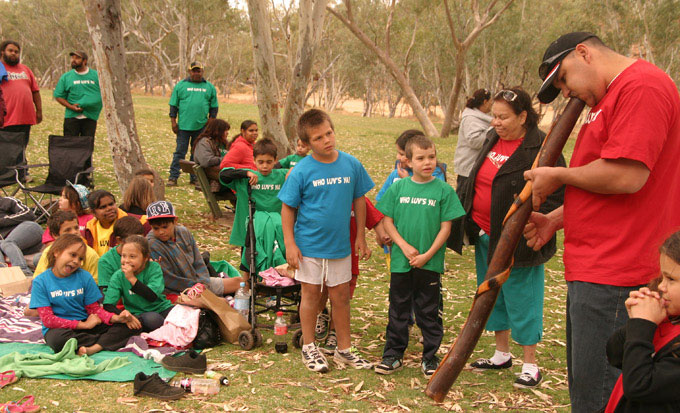 The descendants of Myrtle McDonald have gathered in town this week for a family reunion. For once it was supposed to be just for joy, not for a funeral. At the Telegraph Station on Sunday family members focussed on that even though last Friday they’d again had to bury one of their menfolk dying before his time.
Ronda Ross, Myrtle’s daughter, was the chief organiser. She and her sister, country singer Auriel Andrew OAM, are the last survivors of Myrtle’s seven children.
Myrtle in turn was the daughter of Sandy McDonald and Korulya, a “traditional woman”, said Ronda. Sandy, who owned the pub at Arltunga in the early 1900s gold rush period, was described by Ronda’s son Cameron as a “gypsy” who had brought the first wagon into this country. His restless spirit, Cameron felt, had marked some of the men of the family.
The Telegraph Station is particularly significant for the McDonald clan: Myrtle worked at The Bungalow, helping look after the children of mixed descent
who lived there, some of them forcibly removed from their Aboriginal families. Myrtle used to recall lying in the hills of a Saturday night – “they weren’t allowed to stay in town” – looking down on Alice Springs, seeing where the parties were. A treat for them was “bread and jam”, said Ronda.
Auriel was glad Myrtle had been sent to The Bungalow: “Otherwise we would have lost contact with our Eastern Arrernte family.”
This is important for her and her children although they’ve lived for decades in NSW. Her son Reuben wouldn’t give up fishing or surfing but he says he doesn’t feel “the connection to the land” in his home town of Newcastle; he only feels it here.
Auriel agreed: “It’s like a comfort feeling.”
Two children, Jean and Ray, were born to Myrtle before she met Ronda’s father, Mervyn Andrew. His family in those days had Curtin Springs Station. A white man, he had to get permission to marry Myrtle as a woman of Aboriginal descent; it took six months. They went on to have five children – Fay, Clive, Ronda, Lorraine and Auriel.
Starting from this base, the extended family is a pretty large group now:  Ronda ordered 200 t-shirts just in case everyone turned up. They were colour-coded, a separate colour for the descendants of each of her siblings: purple for the Rosses (her family from her marriage to Graham Ross), green for the Kelly-Woodburys, orange for the McDonalds, and so on. The slogan on the front, “Who luv’s ya!”, was a reminder of something her sister Lorraine used to say, whenever she saw a family member: “It wasn’t a question, it was an exclamation,” laughed Ronda. It was taken up by a nephew who lived with Lorraine, George – “He’s one we lost, Margaret’s brother.”
Margaret was there, donning a green t-shirt. She, three of her children and three of her grandchildren had all come down from Darwin for the reunion. Margaret is Jean’s daughter from her union with Frank Woodbury, again a white man marrying a woman of Aboriginal descent. He was killed in a truck accident when Margaret was 18 months old. Authorities later insisted that his two children, Margaret and George, be sent to live with his parents, in Katoomba, NSW. Jean went on to have five more children with another man, Tim Kelly.
Margaret would be 17 before she returned to Alice Springs and met her mother again: “She told me she had no choice about us being sent away.”
Margaret made her life and raised her children here. Work has taken them far afield – to Charters Tower in Queensland and to the Top End, with Margaret finally leaving in 2007 to be closer to them.
Alan is Margaret’s son.  He worked at The Granites for 13 years before taking a job in the mines in the Pilbara, flying in and out from Darwin. Two of his sisters work at the MacArthur River mine. He brought his young family down for the reunion. With everyone scattering for work, the reunion is “critical for family bonding”, he said. He was looking forward to the “good vibes” of spending time together – “it’s good to step away from the funerals and the losses”.
Cameron Ross took up the theme: “We’ve lost too many, too quickly.” He recalled “Uncle Clive’s son”, Steven, who was buried on Friday: “He lived too hard, it was the gypsy in him, the traveller. He ended up in the middle of Melbourne, St Kilda, I couldn’t do that.” He has moved away though, living in Palmerston now; the mother of his children is from Tiwi. Looking around, Cameron was glad to see all the children; they remind everyone that life goes on and that there’s a reason for having this big party.
Brian McDonald is Ray’s son, one of seven brothers. Three of them have died in the last 10 years, one to illness, one to suicide, one to drink. He works for the Drug and Alcohol Services Association, as a member of their outreach team. He was so glad to be getting together with everyone, although it was a sad time as well, not having his brothers there: “It’s a credit to Ronda, having organised this – she knows the pain of losing everyone.” In the course of this week, he wants to get the family tree written down – it will certainly need a big sheet of paper.
The departed were remembered with a prayer; the first stories were being told; Reuben played the didge; lots of photos were being taken. The inter-staters were shocked to be pulling on jackets in October. Auriel eyed the sky, hoping the rain would stay away. There was a camping trip ahead, a visit to Grandmother Korulya’s birthplace at Winnecke Battery, to Sandy’s old pub at The Crossroads, there were picnics planned, movies under the stars, games at Simpsons Gap, but rain or shine, there’d be a family time to remember.