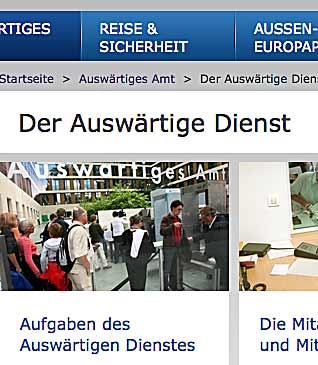 The website of the German Foreign Office singles out Alice Springs as Australia's only location mentioned in the chapter dealing with crime (Kriminalitaet) in its general travel advice (Allgemeine Reiseinformationen). ERWIN CHLANDA reports. 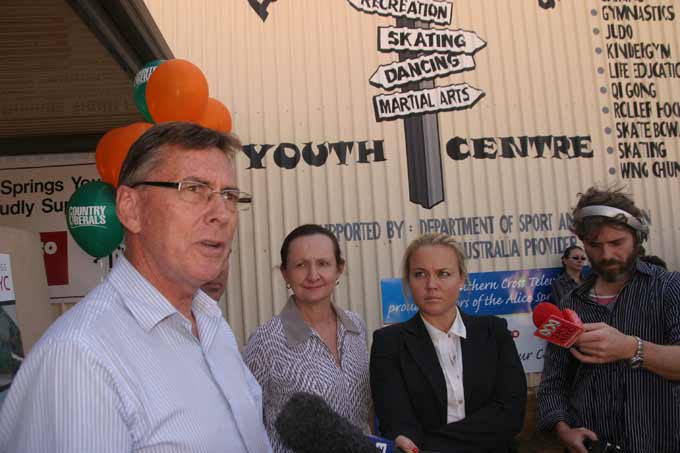 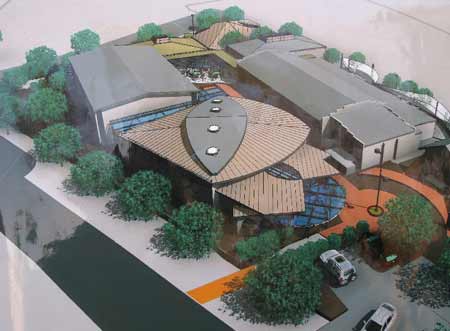 Country Liberals leader Terry Mills pledged $2.5m "to transform the Anzac Hill youth centre into a Police and Citizens Youth Club".
It will "have access to youth workers and other appropriate support networks as well as organised activities and sports infrastructure," he said during a whistlestop visit to Alice Springs today.
"The existing centre will be re-developed in stages [no time frame is given] and the upgraded facility will include a cafe operated by the PCYC."

Asked how many blocks at the new Kilgariff suburb will be sold and at what price, he said the market would set the prices.

Will there be an amalgamation of prison and alcohol rehabilitation farms?

Mr Mills said these facilities would be for people failing to seek help.
"But if that is not sought [that would be] a breach of a court order and then there would be the intervention."

But Russell Goldflam, president of the Criminal Lawyers Association, says this is tantamount to re-criminalising drunkenness.
Mr Mills said there would be 20 extra police in Alice Springs permanently, "not just when some problem arises that causes embarrassment for the government."

He could not answer what new infrastructure the tourism industry could expect because the proposed new tourist commission had not yet been set up.

PHOTOS: Country Liberals leader Terry Mills and MLA for Araluen Robyn Lambley this morning, with reporters. A sketch of what the refurbished centre would look like.

FOLLOW-UP
As there was no opportunity for asking Mr Mills further questions this morning the Alice Springs News Online has emailed him these:-
• Would a CL government provide two more lots of $5m to the Alice Springs Town Council, as it requested, for the revitalisation of town centre? (The Labor commitment is for just $2.5m).
• What plans, if any, does the CL have for the development of horticulture and agriculture in remote areas to soak up the massive number of unemployed there? 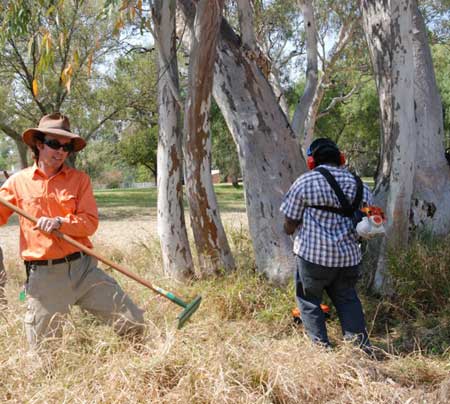 Many Landcare groups around Australia focus on tree planting but in Alice Springs the chief concern of this small band of volunteers is tree protecting, by controlling weeds and preventing wildfires. Leading their David versus Goliath efforts has won a nomination to the National Landcare Awards for Tim Collins, chair of Alice Springs Landcare. He is one of 88 finalists.

Alice Springs Landcare came together because they could see the local landscape changing 'before our very eyes", says Mr Collins. You drive or walk around town and "you see the gaps", he says: where once there was a magnificent river red gum, now there's a blackened stump or an old giant lying there, shattered on the ground. And few young trees are growing to take their place.

The problem can be sheeted home to lack of adequate fire management and the rise of buffel grass which fuels wildfires, says Mr Collins. KIERAN FINNANE reports.

Pictured: Alice Springs Landcare chair Tim Collins removing slashed Buffel Grass in the Todd River as part of Green Corps training in 2011. Unemployed youth were trained in the use of machinery to create firebreaks, and the protection of trees from inadvertent damage. Photo by Tanya Howard.

The One Punch Homicide law was proposed by the Country Liberals following community concern arising from the tragic and violent death of Sgt Brett Meredith in Katherine. However, the trial of Michael Martyn, the man who caused Sgt Meredith’s death, resulted in a conviction for manslaughter. As a result, Mr Martyn is now serving a lengthy prison sentence. If that case illustrates anything, it is that the current law works. If Mr Martyn had been sentenced under the law now proposed by the Country Liberals, he would have been convicted of a much less serious offence, and in all likelihood would have received a lesser sentence. See Letter to the Editor from Russell Goldflam, president of the Criminal Lawyers Association NT. 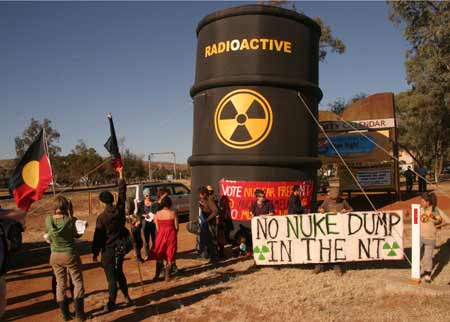 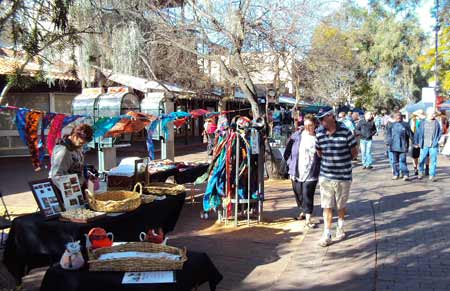 Alice Springs will get only half as much as its Town Council asked for, and much later than expected.

This is the response by Mayor Damien Ryan to the campaign promises made by Chief Minister Paul Henderson last Friday.
Mayor Ryan says the council asked for $5m in 2012/13 to continue the town centre re-development, but will only get $2.5m, deferred and over two years, 2014 to 2016.
"It's pretty disappointing that the CBD doesn't rate before 2014-15 which is a long way away," says Mayor Ryan.
"You wouldn't be able to start stage two with that small a commitment. We need to have the money in place." ERWIN CHLANDA reports. PHOTO: Market last Sunday in Todd Mall. Funding as announced by the Chief Minister would curtail further progress on the long planned town centre upgrade.

Missed the Henley battle of the big boats? Watch it here!

Henley on Thames, move over, you don't need water to have a regatta!

Henley on Todd has been proving that since 1962 with an annual race of bottomless boats and rowers who are more fleet of foot than arm.

And to wrap it all up the big boats are launched for a spectacular sea battle in which locals – including captains of industry – come head to head to head as pirates and Vikings. And all that at least 1500 kms from a decent body of water. If you missed it watch it here!

Henley on Todd is run entirely on a volunteer basis by the three Rotary Clubs based in the Alice. The entire proceeds - well over a million dollars over the years - are allocated to local, national and international humanitarian projects. Images by ERWIN CHLANDA. 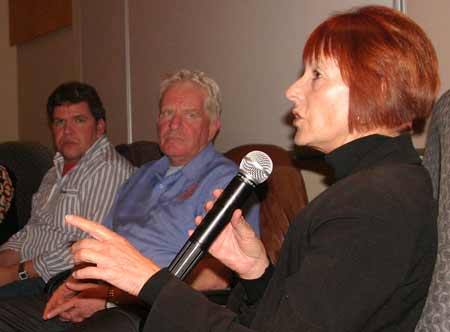 Labor's election promises for Central Australia lack incentives for economic development in remote towns, give no thought to stimulating private enterprise in those areas, and by failing to allocate sufficient money to Alice Springs itself, fall short in returning the town to the tourist destination is used to be.

This is the view of Kay Eade, CEO of the Chamber of Commerce in Alice Springs, pictured at the Greatorex election forum she moderated, with (from left) ALP candidate Rowan Foley and Independent Phil Walcott.

She says money promised for football fields in bush communities would be better spent on stimulating business: "Why do electricians drive in and out from Alice Springs to service these communities?" she says. ERWIN CHLANDA reports. 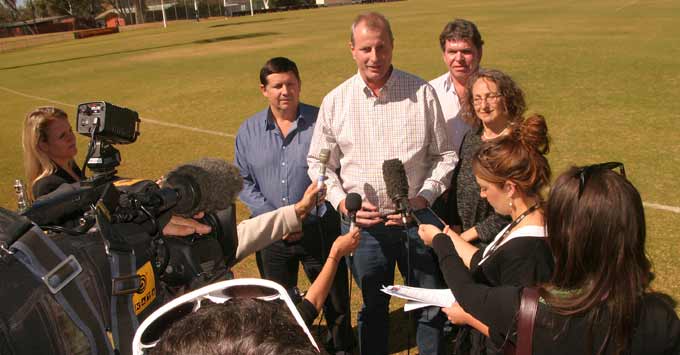 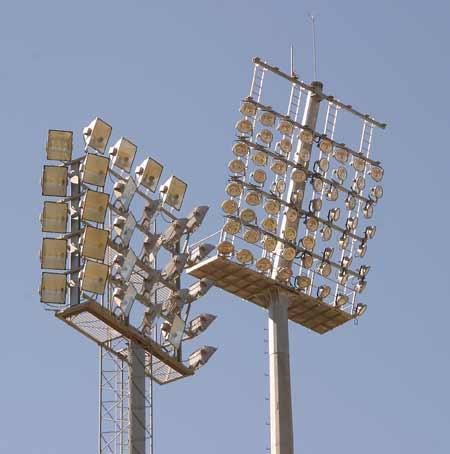 The Territory Government, if re-elected next week, will spend as much on a third set of lights for Traeger Park as it will for the rest of the town.

Announcing election promises for Central Australia, Chief Minister Paul Henderson said in Alice Springs today it will cost $2.5m to upgrade the lights to broadcasting standard, so that AFL games such as the Indigenous All Stars can be broadcast nation-wide.

The same amount will be paid to the Town Council for the enhancement of the CBD and community parks. 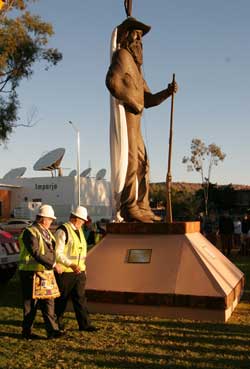 Two years after the debacle over the erection of a giant statue depicting explorer John McDouall Stuart, the Alice Springs Town Council and McDouall-Stuart Lodge no.219 announced this morning that they have agreed to locate the statue "which was gifted to Council by the Lodge" at the western end of Stuart Park on Stuart Terrace. Further, council has made an an application to the Heritage Committee for approval of the placement, required because Stuart Park is part of the town's Heritage Precinct. That committee will next meet in October.

Bread & circuses in Darwin, crumbs in the bush: do the numbers 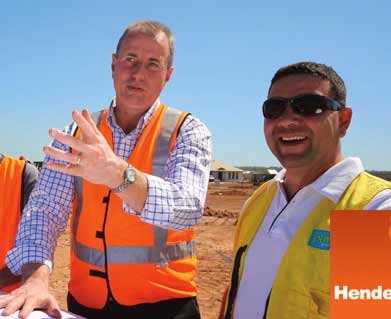 How 'worthy' is Hendo's Big Nite In?

Today, August 16, Territory Labor committed $10 million over four years to support local developments and initiatives in the Territory Growth Towns. It was billed by Chief Minister Paul Henderson (pictured on the 'Team Henderson' website with Minister for Central Australia Karl Hampton, in sunglasses) as a commitment to "build a better future for all Territorians, no matter where they live".

But it's worth doing the math to make sense of just how much of a "better future" the Chief Minister envisages for those Territorians who don't live in Darwin and do live in the so-called Growth Towns. These are all mainly Aboriginal communities off the Stuart Highway. There are 21 of them. KIERAN FINNANE comments.

Car fuel: nice work if you can get it

Further details are coming to light about the high cost of automotive fuel in Alice Springs although the industry is still refusing to answer questions.

The informant mentioned in our report posted last week bought diesel on August 3 for about $1.53 a litre from an Alice Springs wholesaler.
According to FUELtrac the Terminal Gate Price (TPG) on that day in Adelaide was an average (across all companies) of $1.34.

The TPG is usually for full tanker loads (of at least 35,000 litres) for product paid cash on delivery (COD).
Transport to Alice Springs is believed to be 7 to 9 cents a litre. Assuming it's 8 cents, that gives the wholesaler a margin of 11 cents a litre – three cents more than the retailer is getting. That's a mark-up of $3850 for the 35,000 litres, of course delivered in bulk.
The Alice Springs News Online has asked the wholesaler for a comment. ERWIN CHLANDA reports.